How do you take on two of the world’s biggest corporations and win? Well you start by saying "it can be done better". At least, that’s what Mirco Wolf and Lorenz Hampl told each other as they sat in their kitchen one day, eating a frozen pizza. And with that, the two entrepreneurs had the idea of developing a soft drink that was better than Coca Cola and Pepsi. 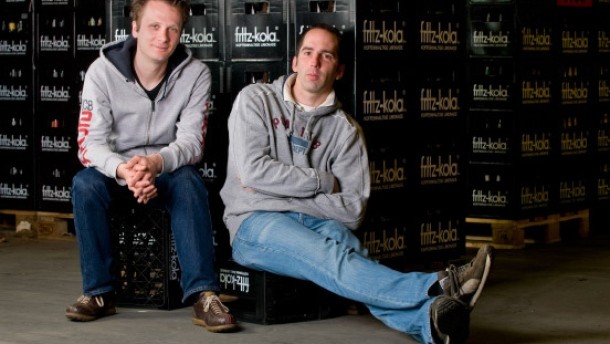 Now Germany’s biggest soft drinks brad; Fritz-Kola started out as a brave but potentially catastrophic idea. Wolf and Hampl had no recipes, no prior market knowledge and no capital to bankroll their project with. Instead, they went with their gut feeling, established the core brand ideals and raided savings accounts across their native Hamburg to turn their idea into a reality.

What followed were a series of part strategic, part economical moves that helped situate Fritz-Kola as the drink of choice amongst trendy clientele in big cities. First up, they decided that Hampl; the left face on the logo, would manage brand management, transportation and marketing. Wolf; the right face, took on the PR, production and sales side of things. 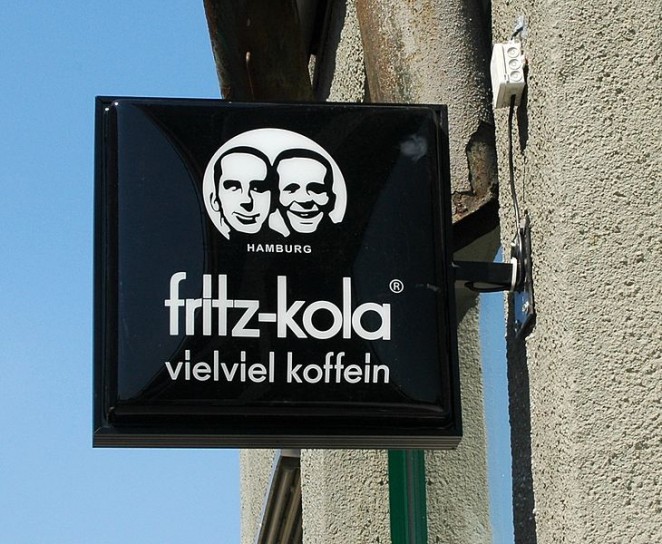 After extensive research, which started with the duo typing “cola ingredients” into Google, a recipe was born that differed radically to anything else on the market. Far less sugar, natural ingredients and a sky-high caffeine content made Fritz-Kola an attractive choice for health conscious customers with an interest in socialising. It’s the caffeine content which drives the brand’s motto: Vielviel Koffein, which means 'lots and lots of caffeine'. There’s 25 milligrams of caffeine per 100 grams of Fritz-Kola whereas regular Coca-Cola contains just ten. 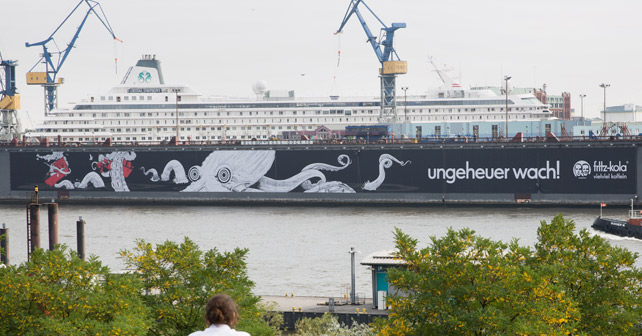 Cleverly, the drink has only ever been manufactured directly for bars, which is why it can only be bought in half-litre beer bottles. This meant fans noticed the drink straight away and actively sought it out in social situations. It comes as no surprise that these days, Fritz-Kola is Germany’s biggest non-beer seller.

And what about that logo? Well, for Wolf and Hampl, the reason to market their own image was a simple lack of cash. The rights to their faces were free, whereas developing a logo from scratch would have cost the pair up to 20,000 euros. Similarly the now iconic black-and-white colourway came about because of the cheaper print costs when compared with coloured versions.

From the first batch of 170 bottles in January 2003 Fritz-Jola took off, first in Hamburg and then slowly all over Germany. If you’ve visited the country, or indeed many European capitals recently, chances are you’ll have caught Wolf and Hampl’s faces looking at you from a nearby drinks label. Slowly the brand is revolutionising the European soft drinks market and England is next.

The Fritz-Kola story is one of the underdog, of an unlikely duo taking on multinational companies and, in their own way, winning. Any time you want to do something similar we suggest you start by saying ‘it can be done better’.

Mimicking nature in man-made product designs has led to some of the greatest and most enduring inventions or products that exist today. In the modern era especially, designers are open to ways they can work together with our environment- rather than...