Dying to be happier? It's your funeral

Contrary to what you might think, based on my frequently acerbic blog posts, I am not a complete misery. Oh, things annoy me, sure. And truth be told, probably more so than the average person. As my dad used to say, “I don’t suffer fools gladly”. And nor do I tolerate my thieving ex-tenants whom I mentioned in my last blog post either. So that’s a day in court I’m very much looking forward to. As they say in all the pseudo-macho films: bring it on. Oh, and Merry Christmas.

You're a fool? I will suffer you ungladly

Having said I don’t suffer fools gladly, one of the ways I like to spend my lunch break is to watch a bit of Karl Pilkington’s series The Moaning of Life while I eat my houmous and carrot wrap. The episode I watched today featured Karl with a professional mourner in Japan. Yes, a professional mourner. These people are paid to attend funerals to moan and wail about the loss of a loved one on the behalf of the bereaved. Crazy.

I know people can be a bit weird when it comes to death (once again, Merry Christmas), but today I coincidentally heard about a company in South Korea where employees have to attend their own funeral. The reason, apparently, is that South Korea has one of the highest suicide rates in the world, so the theory is that by attending one’s own [fake] funeral, it makes the employees value their lives more.

Say hello to the Grim Reaper

The ritual is truly bizarre. The employees, dressed in white funeral attire, write final letters to their loved ones and get into their own coffins, clutching pictures of themselves. The coffins are secured shut by a man dressed in black, representing the Angel of Death. When the employees are released ten minutes later, they “see the light” in more ways than one – both literally, and knowing what they need to change in order to lead happier lives. 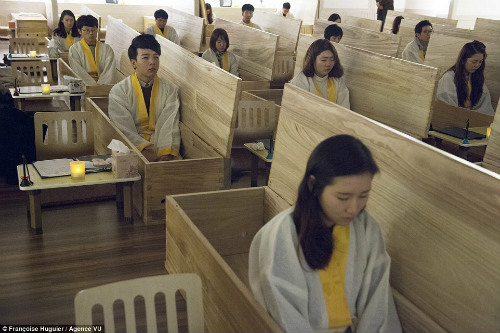 It strikes me that they could achieve just as much without clambering into their own coffins – this is quite a literal version of immersion therapy – but then let’s not forget that in North Korea, people openly wept (on pain of something or other, perhaps) when Kim Jong-Il shuffled off his mortal coil. Maybe there’s something in the cultural DNA, if not the water.

On the bright side, the same company has a forced laughter ritual every morning. Led by the supervisor, they have to laugh and clap en masse before the day’s work can begin.

The thing is, though, I’m not knocking it, however bonkers it sounds to us in what we feel is the more grounded Western world. I have every reason to be happier than I am, and yet I’m frequently a bit morose – arguably to the point of self-pity. I’ve got a lovely wife (my friends often remind me that I’m punching above my weight), a spectacularly handsome dog, a nice house, and I’ve inherited my Dad’s sports car. Oh, and I’m typing this in a converted cattle shed overlooking some arable farmland while drinking a super Lavazza coffee. Who knows? I might even treat myself to a biscuit after I’ve finished writing this.

So actually, I’d better get over myself and shut the heck up with my whining. Worse things happen at sea etc. But perhaps significantly, I’ve come to that conclusion without the aid of pretending to die and burying myself alive. Mind you, you Creativepoolers are a creative lot: any ideas?