In a new ad spot from AKQA London and Mind's Eye director Luke Bellies for Oreo, the legendary cookie company is asking their fans to “Lick for it,” whenever conflicts arise. The ad reveals pairs of friends and siblings arguing over various common disputes such as riding in the front seat of the car, choosing what to watch on TV and taking the blame for accidentally defacing public property (Ok, maybe that last one isn't quite so common).

The ad is underlined by the copy; “We've all got something to settle,” and the tagline “Lick for it,” which is a fresh take on the company's previous 'Twist, lick and dip' motto

Whereas you might (with good reason) expect the spot's stars to simply shout at each other until somebody wins (a favourite conflict resolution device among children all over the world) or flip a coin, they instead take out a double stuff Oreo cookie each. It's implied that whoever can lick their cookie clean of cream first is the winner of the dispute. The ad is underlined by the copy; “We've all got something to settle,” and the tagline “Lick for it,” which is a fresh take on the company's previous 'Twist, lick and dip' motto. 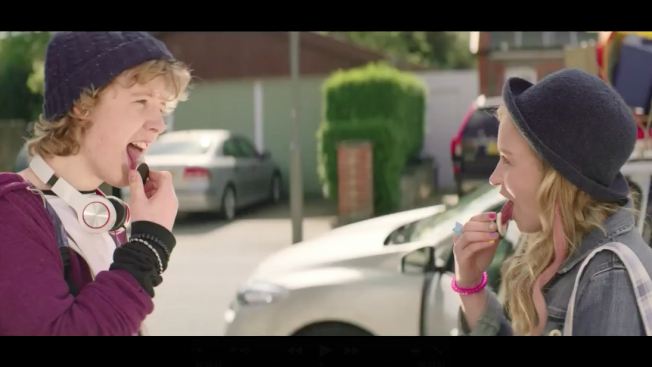 The strange, but decidedly charming ad, has a lot in common (at least aesthetically) with the famous 'Tootsie Roll Pops' campaigns of yesteryear. However, whereas those ads were aimed at all and sundry, these ads appear to be aimed specifically towards young teens and 'tweens', a point that is driven home by the soundtrack, which consists of the kind of boilerplate dub-step, which will send adults and children diving for opposite ends of the volume dial.

Duan Evans, executive creative director at AKQA, is very happy that the agency has landed the Oreo gig. He believes that Oreo “have done some amazing stuff lately (for example, DraftFCB's 'Daily Twist' campaign, which won a Blue Award as this year's Facebook Studio Awards).” Work that, to him at least, is “Quite traditional advertising (copy, image and post), but traditional advertising done through the right channels and with the right tone.” He says that they have “Talked to their audience, connected, used social issues and elevated all that to make something that’s potentially beyond the way advertising’s been done in the past.”

Benjamin Hiorns is a freelance writer and musician from Kidderminster in the UK. He eats his Oreo cookies whole, as he doesn't believe in playing with his food!