JWT London and Mr Kipling erect an edible poster made completely out of cake!

In a completely bonkers (and utterly ingenious) move, Mr Kipling has teamed up with JWT London to create the latest part of its new-look ad campaign, which attempts to bridge the gap between print and experiential advertising. In this instance, the firm has literally built a poster out of cake. The poster in question was constructed outside the Westfield Shopping Centre in Shepherd's Bush, London, with 13,360 Mr Kipling cakes erected at noon yesterday, with the public invited to come and deconstruct the poster and devour the results. You can see what transpired for yourselves below, needless to say as you read this, there will be naught but a blank space where the tasty spectacle once was. 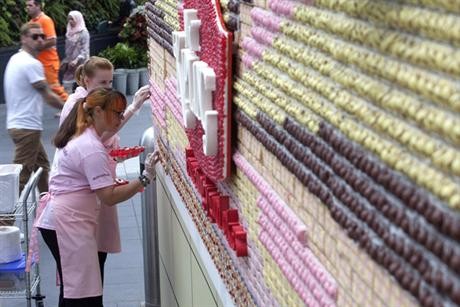 Lisa-Jo Harvey, senior brand manager of Premier Foods, the company that owns the Mr Kipling brand, said they couldn't possibly have thought of a better way to “Show people that life is better with cake” than by creating “An edible poster made out of thousands of exceedingly good cakes.” David Masterman, creative director of JWT London, meanwhile, believed that “If Mr Kipling himself was doing a poster, he'd make it out of cake.” Other companies involved in bringing the ambitious creation to life were Outside Line and Carat and Cirkle.

The poster in question was constructed outside the Westfield Shopping Centre in Shepherd's Bush, London, with 13,360 Mr Kipling cakes erected at noon yesterday

The poster is the latest stunt in the brand's “Life is better with Cake” campaign, which was launched last week by JWT London to remind the public how much joy a simple cake can bring. The campaign seeks to completely transform the brand and the cake category in general, reminding the people of Great Britain that cakes (mr Kipling cakes in particular) can bring delight and a sense of wonder to any occasion. The first TV spot (seen below) features a young boy enjoying a slice of a Mr Kipling cake with his imaginary friend, who just so happens to be a gigantic pink elephant. Rest assured, however, that whilst the brand is looking to change its image, with a new website, in-store shopper activity and online advertising, it will, of course, retain the famous “Exceedingly good” tagline.

Matthew Critchley, the category marketing director for cake at Premier Foods, thinks the campaign will “Really put Mr Kipling back in the hearts and minds of consumers.” He says that the brand truly believes life is better with cake and they “Want the world to experience that delight more often.” The edible billboard is a good start. Masterman said “It's not just Mr Kipling's lovely little cakes that are delightful, his communications are too,” and it doesn't get much more delightful than free cake!

Benjamin Hiorns is a freelance writer and musician from Kidderminster in the UK who could murder a battenberg right now!