Colourful characters show a new side to artificial nutrition | #BehindTheIdea

Page & Page and Partners, a London-based creative agency specialising in health and wellness, and patient advocacy group PINNT launched the adorable ‘PINNT Buddies’ campaign earlier this year to transform the lives of people they support.

The PINNT Buddies are a collection of animated animal-based characters designed to give confidence to those who rely on liquid nutrients. The vibrant and engaging animal ambassadors demonstrate how people shouldn’t be hindered from following their passions, whatever the challenges.

PINNT, a patient advocacy group supporting individuals with artificial nutrition at home, was looking for an accessible creative solution to resonate with a broad audience including patients, carers, children, adults, and healthcare professionals which would inspire a newfound confidence and a zest for life.

To go behind the idea, we spoke to Rachel Harris, Partner & Client Services Director at Page & Page and Partners to discuss the origins of the idea, what made it work and why finishing the job at a Travelodge at 1am isn’t as bad as it sound.

PINNT came to us with the idea but what they couldn’t do was execute it, so working alongside them we helped to push it further and, while remaining sensitive to their idea and their concept, we elevated it with our processes, imagination and active consideration, a cornerstone of what we do. We put ourselves in our target audience’s world and in doing so we were able to think about what would resonate with them.

This wasn’t just aimed at patients but also their families, partners, and their doctors, PINNT wanted the Buddies to speak to as many people as possible so that they could support and encourage people using artificial nutrition.

It was exciting, we took what they wanted and worked with them to put it into our creative brief and then we pushed it and tested it. Instead of just delivering their idea, we went through the process as though they were a client to ensure it was a fully realised project that would help them deliver the goals they wanted to achieve with it.

Once we had the initial idea, we spent a lot of time creating the world of the characters and building their backstory, which wasn’t used publicly but it helped inform the creative process. Whilst we were doing it, we were talking with the client, ensuring it was the right tone. Elements from all that groundwork were used but in subtle ways.

We managed to create something that had a fun, childlike nature but had nuances throughout, allowing it to speak to a range of individuals.

Once the stories had been written, we went to investigate illustrative stylings to match the characters and then we started working on the animations. We wanted to ensure that the animations captured the spirits of the animals and the personalities we had developed for them. 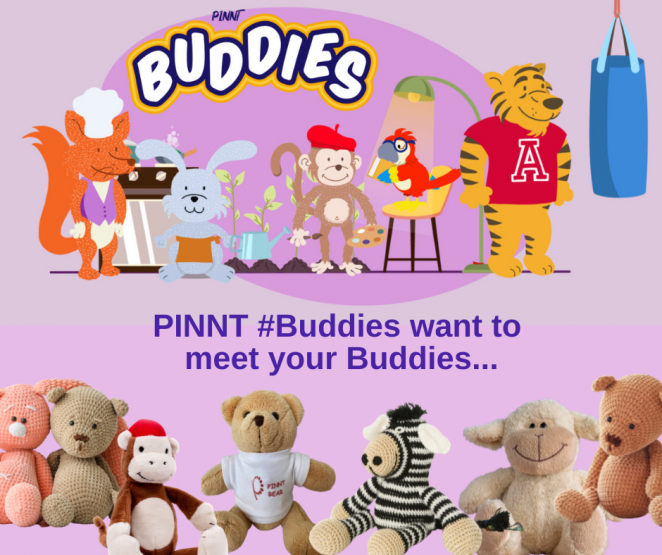 PINNT were an incredible client to work with, they loved the process of watching it turn into the finished project. We took an initial drawing that was presented to us and ran with it. Once it had been illustrated, it was then moved into the animation stage which is where a lot of the fun was had in watching these drawings come to life.

We also sent them everything, the backgrounds, the stories, stills, etc. so now PINNT are able to use the characters as mascots for a lot more than just one project.

PINNT wanted the Buddies to appeal to everyone of every age, which can be incredibly challenging, so there was a lot of consideration in striking the delicate balance. The backstories helped the process because it allowed us to experiment.

The project was finished in a Travelodge in Wales at 1AM in the morning. We needed to make some final changes and amends and while it wasn’t our glamorous office in London, we still somehow managed to pull it together.

That nobody should feel limited when using liquid nutrients. Everyone should have the opportunity to experience new things and that’s always better when it’s done as part of a community, which they were able to do with the Buddies. The Buddies present those in the patient support group with a range of activities, with various levels, so that everyone can be involved.

The project took around 3 months from brief to completion. Whilst this work was pro bono, we wanted to ensure we put the same level of care in crafting it as we would a regular client.

To help support PINNT in spreading awareness of its cause, and to demonstrate how parenteral and enteral nutritional treatments do not hinder one’s ability to have a passion.