With the stigma around mental health issues and vulnerability still alive here in the UK, we can only imagine how bad it can be as a member of an underrepresented community.  Black Minds Matter UK set out to change that.

With a campaign/challenge aiming at finding 21k donors in 21 weeks, the organisation hopes to tackle the stigma around mental health and raise enough funds to drive some impactful change in the POC community. The campaign's 21 weeks, which started in March, will culminate with the one-year anniversary of BMMUK's first ever fundraising campaign.

Today we are getting Behind the Idea following a chat with Agnes Mwakatuma, Founder of BMM UK. 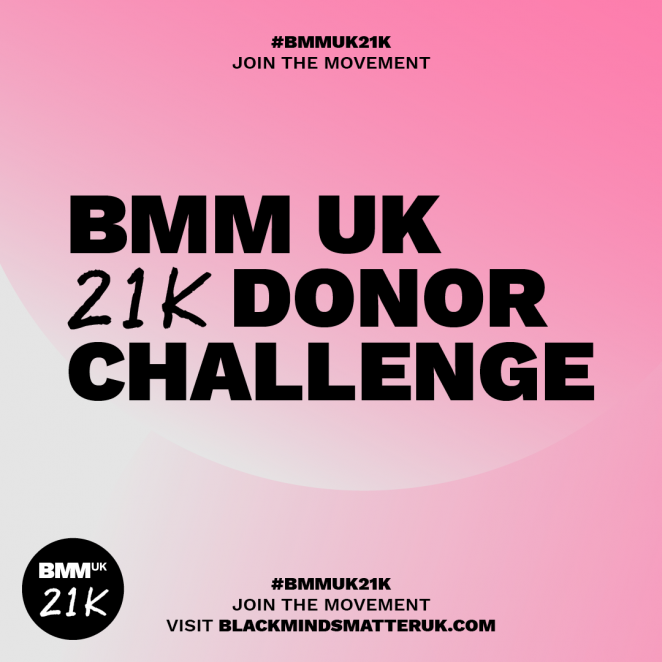 We wanted to create an engaging fundraising campaign to mark the one year anniversary of our founding and to help accelerate the future of BMM UK. We had an incredible amount of support during the first 3 months of our founding , receiving donations from 25,000 people. This is what inspired our campaign, to aim to recreate the amount of support we received in those first few months but this time with the aim of helping BMM UK become a sustainable charity through monthly ongoing donations, readdressing the notion that we are not a moment, we are a movement and we need long term support.

Initial brainstorming was a conversation between our core team to cement the idea and think about when best to action it. We then had the incredible help of our volunteers to offer their advice on how we can make the campaign both exciting and engaging and how to tell our brand  story through it too. This is when we thought about how we can tie it into our one year anniversary of BMMUK. 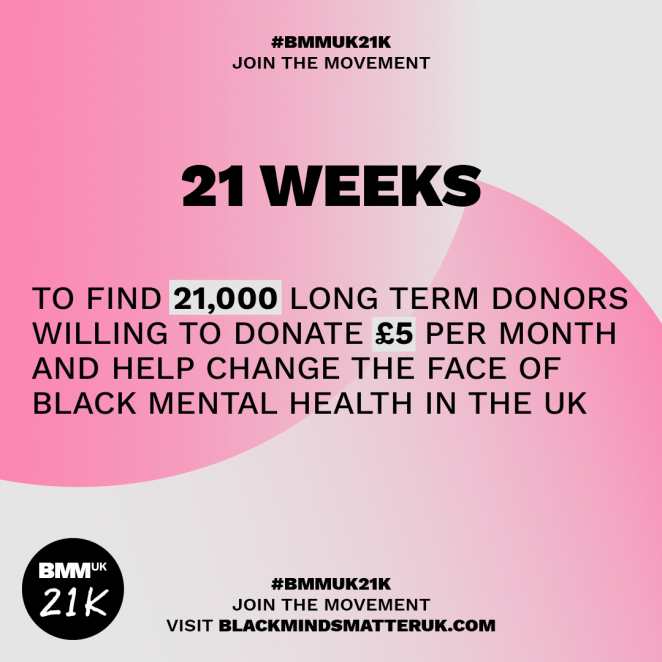 The concept came to life through a discussion on what BMM UK actually needs in terms of financial resources. 1,500 people is the approximate amount of people we currently have on our waiting list, who initially registered their interest in receiving therapy with BMM UK. Therefore an income of £1.2 million each year would guarantee BMM enough financial resources to cover the cost of 1,500 , 12 week courses of therapy every single year. That's 1,500 people that we can guarantee would have immediate access to therapy via BMM UK. We worked out that if around 20,000 people could donate £5 per month to BMM UK it would allow us to reach that target. We decided on the number 21,000 instead to mark the year 2021 and this as our next stage of fundraising. 21 weeks from the launch date of march 1st would lead us right up to the 1 year anniversary of our first ever fundraising push, marking a full circle of our one year journey but hopefully securing BMM UK’s sustainability as Black mental health charity and allow to to take real steps into creating a lasting impact on Black mental health.

We are a small team, and some of us are volunteers working other full time jobs – so from ideas to, execution – it was a lot of work. And still is, the challenge is lasting 21 weeks in total, so making sure we keep up momentum is important. But we are really happy with the outcome and progress so far, the amazing team work tirelessly to consistently outdo expectations. 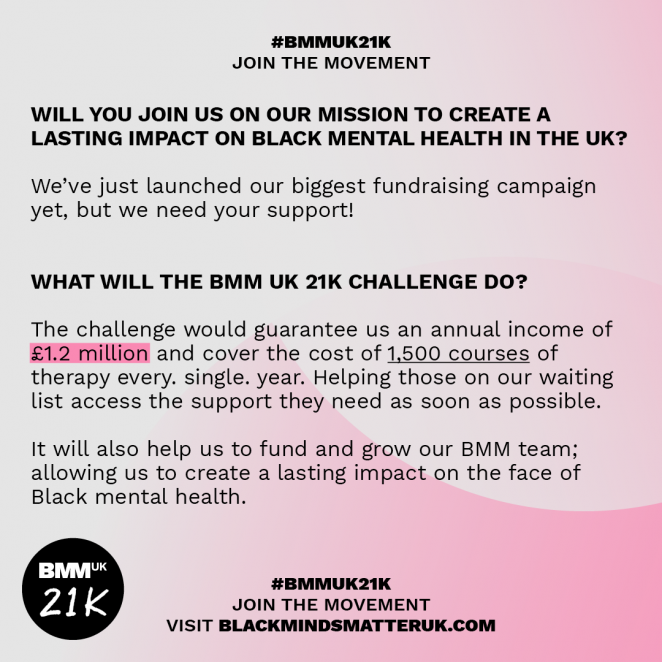 One notable thing which isn’t just specific to the campaign but to BMM UK is that the majority of the team have never met each other before in real life! We work with so many volunteers on a day to day basis that it’s really funny/ strange that many of us have never met before- obviously due to covid and lockdown. I think it’s really notable though, how we have adapted and found ways to connect within such  a  difficult year. That being said we can’t wait until we can see/ meet  each other and celebrate what BMM UK has become.

That long term donations really are at the heart of charities, of course one off donations are equally as amazing! But we want to provide a steady flow of support and this is where regular donations make such a difference. 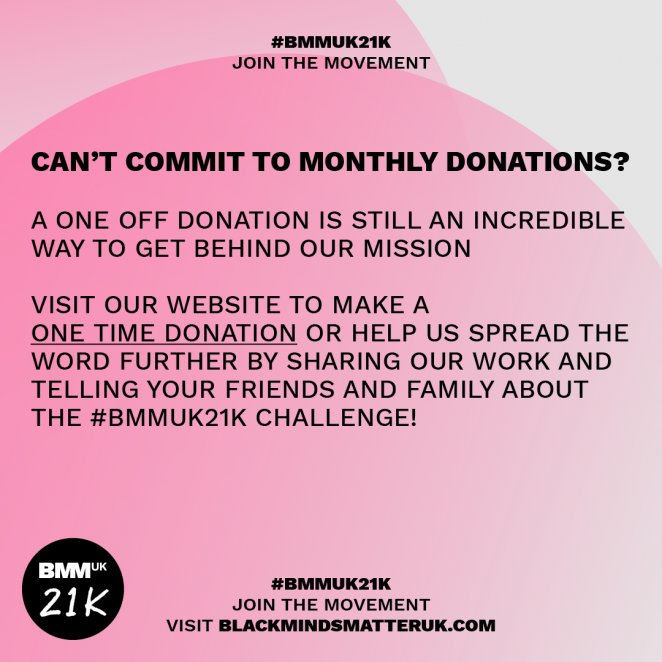 The time element and the brand story told through this campaign is definitely unique. We have come so far in the past 9 months, being able to use this campaign to signify our long term endeavours and next stage of growth, whilst still in our first year of founding,  is really unique to BMM UK. Including a wide and diverse range of people for our launch video is also something special about this campaign. We want to make sure people feel included in this conversation on Black mental health and injustice-  it isn’t something that only Black people should have to speak on or be informed about. Real change needs everyone engaged in the conversation, so we’re proud we were able to do that and aim to continue that too.

We turned this around in about 2 months! But are now working on the next stages to last the full 21 weeks. 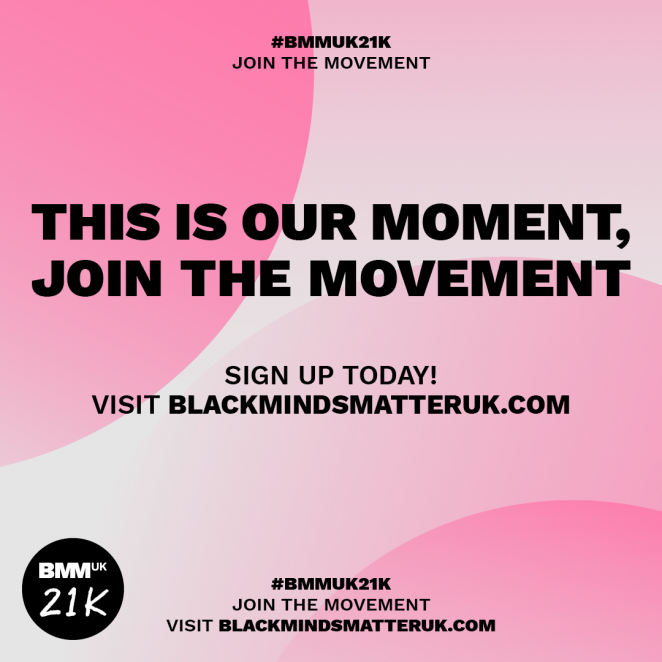 In simple terms, of course we want 21,000 lifetime donors in 21 weeks. But we want this to be more than that, we want to change the face of Black mental health forever. We work to change three main aspects

1 - The treatment of Black individuals in the UK when it comes to mental health support and therapy. Providing access to free mental health resources , especially in the form of therapy sessions is really impactful and will benefit so many people in our community.

3 - To also allow us to grow and fund our BMM team! We’re massively working over capacity and need more hands on deck to help us achieve our goal.

4- To be able to guarantee an annual income via donations will allow us to start to properly think about how we can tackle some of the wider systemic barriers to the work we do. There is a massive representation problem in counselling which really limits how many people we can help at a given time and moreover limits people's perceptions of who therapy/ mental health support is for. We want to work on changing that. So if this campaign is a success ,we can free up some of our energy to work on tackling that which is really exciting.