Beyond Billboards: The true potential of OOH

When the vast majority of us hear or read the phrase "out-of-home advertising," we picture exactly the same thing; billboards. Big, beautiful billboards. They still occupy our high streets and motorways despite the incredible shift into the digital age and they still bring in the valuable ROI for brands thanks to the fact that people still walk down the street and drive their cars and the recent digital innovations in the space.

Of course, while programmatic OOH is very much a 'hot topic' right now, and it certainly is a powerful and flexible tool, there are far more interesting things happening in the world of DOOH (digital out-of-home). Sitting comfortably at the forefront of the digital OOH revolution are Primesight,  the Creativepool studiocrowd OOH media partner, who recently unveiled the internet-enabled InLinks. The first of these intelligent units appeared on Camden High Street in London last week and offers free public wi-fi at speeds of up to one gigabit per second, which is leagues ahead of most generic 4G speeds. 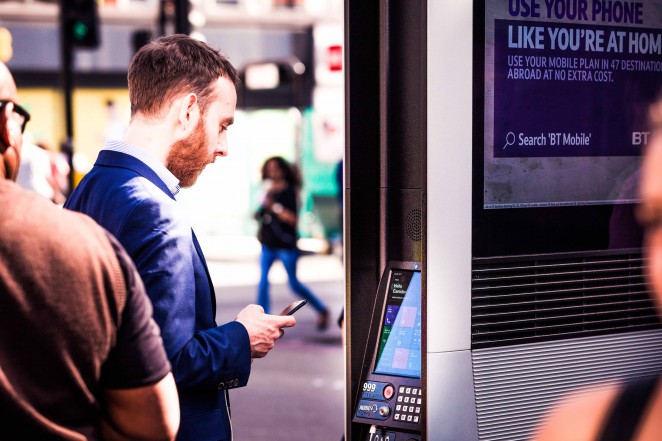 The screens, which will also offer free UK landline and mobile calls and charging stations, feature real-time information, such as travel updates, and weather forecasts. Best of all, the InLink services are completely free to use, because the project is funded by advertising revenue generated by the commercial messages displayed on the screens.

Naren Patel, CEO of Primesight, said of the units: “As London continues to develop as a smart city, the launch of the InLinks will provide a real value exchange between consumers and brands. Consumers will see relevant content from brands on the screens and use the free services provided, and in turn, brands will benefit from being associated with a product that will provide real benefits to the people in the communities. It’s a fast, smart, ad-funded product that is set to benefit consumers and advertisers alike.”

With these screens, Primesight effectively gives consumers a 'try-before-you-buy' experience with BT broadband that couldn't really be achieved any other way. They are also, very wisely, choosing to test these units in areas where there is high footfall, offering the greatest number of people the opportunity to make the most of them, increasing their community value.

InLink is emblematic of the momentum in Out of Home today. In the UK, spend in all OOH was up 4.5% in 2016 YOY, and spend within DOOH was up by a staggering 25.7% - massively outperforming the display market as whole (up 2.8%). InLink offers advertisers a state of the art platform to connect with consumers, as they search, shop, share and snap more than ever before..

There will also always be those who feel like tech is encroaching on OOH when it has no need to, but these are generally the same people (the old guard) who feel that the freedom and flexibility offered by digital OOH screens give rise to laziness and 'dumbing down'. This might have been the case initially, when creatives were still scrambling to get their heads around this new-fangled technology, but recent activations, such a the InLink screens, and the advent of programmatic DOOH with Primesight's new ad buying tool, PILOT, proves that, while there is still an inherent purity to a well-designed static OOH poster, a digital OOH screen can be that and so much more besides!

Speaking of well designed static OOH posters, AMV BBDO worked with Snickers and Primesight to develop a Valentines Day solution for forgetful significant others by implementing an interactive poster in London's Waterloo station where people could peel off a Valentines Day card. Taking the unforgettable "You're Forgetful When You're Hungry" and making it literal, the campaign continued onto the 15th and 16th February by providing belated Valentine's Day cards. 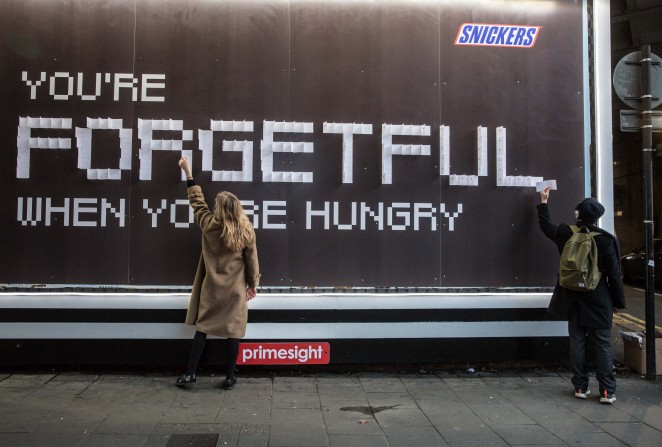 A great poster should inspire its audience and provide a memorable image that helps underline the brand message and make the brand memorable. A great digital screen, however, can bring that message (and in the same breath that brand) to life.

There is also the argument that technology can also be used to improve the effectiveness of traditional posters and billboards. PrimeDesign is a very clever creative evaluation tool from Primesight that identifies the parts of a poster most likely to be noticed in the first three to five seconds of attention, which is the typical time a passing audience will have to see the poster. Working with similar technology as Google Goggles, it produces heat maps and allows advertisers to see the components of the poster that are most likely to be noticed.

Clients who have used this tool have often completely altered their designs. One example is Mastercard, who used PrimeDesign on one of their “Priceless London” posters and found that the vast majority of attention was focused on the logo. As such, they completely redesigned the poster, replacing the existing print-style ad with a more simple, direct and logo-centric design.

So, the future of OOH, and its great potential, perhaps lies in utilising technology in a number of interesting, unique and often unexpected ways, while retaining the creative drive and passion that has led to some of the world's most iconic posters and billboards.

Whilst traditional 90 second TV spots appear to be dying out, I honestly don't see their OOH counterparts (old school billboards) going that way, at least not as long as there is still footfall on our city streets and paper costs less than LED screens. However, while big screen innovation is happening, it's in smaller activations where the real innovation appears to be, and once that innovation starts making its way to the big screens in a big way, it might be all but impossible to look back.

Primesight is the official OOH Media partner for the studiocrowd crowdsourcing platform, providing innovative DOOH and expertise in OOH media for studiocrowd  partners.

Seen an innovative DOOH activation? Share them with @Creativepool and @Primesight on Twitter with the hashtag #MakeAnImpression.