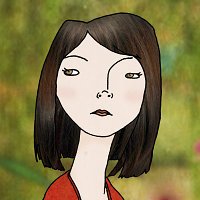 Intro
"How Mindfulness Empowers Us" is one of four in a series of animations I created for Happify, a company that creates science-based activities and games that help people to lead a more fulfilling life.

The brief
Happify got in touch as they wanted a series of animations to bring awareness to their company. They wanted the videos to be fun and engaging, and to help spread a positive message about meditation and mindfulness to a wide audience.
The audio snippet for this animation is called "How Mindfulness Empowers Us", voiced by Sharon Salzberg. She recalls an old tale about two wolves, and how they represent the two opposing forces love and fear.
The brief was completely open, and Happify let me loose to write a visual script for the video.

The idea
To keep with the theme of the other animations in this series, I wanted our main characters to be anthropomorphised animals, in this case wolves.
The wolves that represent love and fear are wild - wolves that stand on all fours. I made them translucent so that they seemed more spiritual and representative of a concept, rather than living beings.

The result
The client was thrilled, especially with all of the little touches I put in: the sound effects and little details which make it more likely people might watch the video/s twice.
The series of videos have been widely shared and blogged about by a huge audience around the world. Approximately six months since the release of the first video, the series gathered over half a million views on YouTube and 300 thousand views on Vimeo.
I was thrilled to find out that the video was nominated for Best Animation Series at the Royal Television Society West Of England Awards 2016, up against production company giants Aardman and Arthur Cox. This is a huge honour for me, and Happify were over the moon too!

Katy has been a Contributor since 25th November 2015.

How Mindfulness Empowers Us