Virgin Trains on the east coast is launching an innovative data-driven, dynamic Digital Out-of-Home (DOOH) campaign aimed at car drivers to remind them that there is a stress free, fast, viable alternative. The reactive campaign automates messages based on local traffic data and vehicle recognition technology, to add relevance and context to messages that will be deployed on premium DOOH roadside inventory in Leeds and Newcastle from the January 30 through to February 12.

In Leeds, the traffic reactive campaign changes based on congestion levels on roads in close proximity to each digital billboard site and provides tailored, contextually relevant messages aimed at encouraging drivers to consider Virgin Trains’ service. Produced in partnership with Grand Visual and Manning Gottlieb OMD, the dynamic campaign aligns with driver’s mindset in the moment by suggesting commuters should “avoid all this bleeping traffic” when traffic is heavy during the morning rush-hour, for example, followed by the call to action “Leeds to London, 2HRS 14MINS.” Live updates are managed through OpenLoop, which analyses Google API’s data and automates the play out and delivery of geo-targeted content to each media owner in real time. In Newcastle, meanwhile, Ocean Outdoor is executing a vehicle recognition campaign which plays out the Virgin Trains’ ad when certain cars are at the traffic lights in front of a DOOH screen. The ads are therefore hyper personalised reaching out to individual road users with attention grabbing messages like “Hey Silver Ford Driver, stop seeing red. Don’t get cross on the roads. Newcastle to London 3 hours 7 mins.” 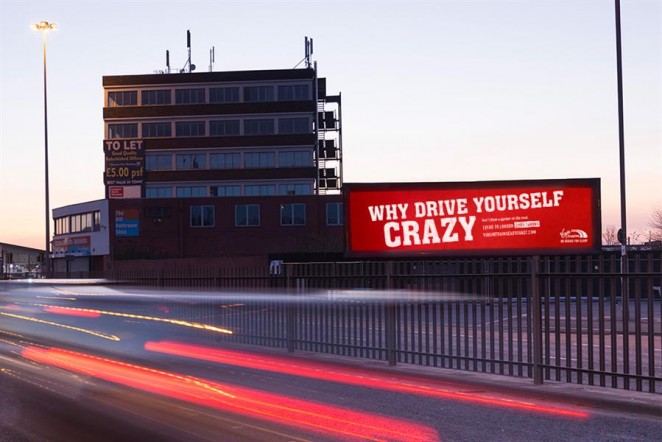 The campaign is the result of a collaborative effort between Virgin Trains, client agencies Krow, Manning Gottlieb OMD, Talon, and production outfit Grand Visual, and the media owner’s Ocean Outdoor, City Outdoor and 8 Outdoor. The DOOH activity supports a broader campaign spanning TV, Digital, OOH, Print and Radio. The initiative represents a new marketing direction for Virgin Trains, as it pushes to innovate it’s marketing communications with intelligent use of data and technology to keep messages targeted and relevant.

Emma Jansons, Marketing Manager at Virgin Trains on the east coast, said: “Digital Out-of-Home is the perfect fit for our marketing campaign because it intercepts active consumers with highly targeted messages as they move through their day. The medium is working hard, reacting to traffic conditions and providing contextually relevant messages that resonate with road users to pull out the pain points of driving over catching the train.” Dan Dawson, Chief Creative Technology Officer at Grand Visual, added: “Clever use of data and technology amplifies campaign relevance, transforming digital out-of-home advertising networks into real-time marketing platforms. With the right team and a collaborative approach, it’s never been easier to produce engaging and responsive campaigns at an individual screen level ensuring the campaigns remain targeted and relevant.”