A building block made from mushrooms? Space boots for Mars grown with human sweat? The end of plastic? Today’s and tomorrow’s global issues are addressed in the 2018 Beazley Designs of the Year show.

“Designers are always very good at responding to the world around them and, if anything, the world around us is probably defined by uncertainty,” says Aric Chen, this year’s curator. “Things that seemed clear in our minds are no longer so.” This questioning of “what constitutes normal” is dealt with in many innovative ways, with many of the 87 nominees applying scientific discoveries to design disciplines. 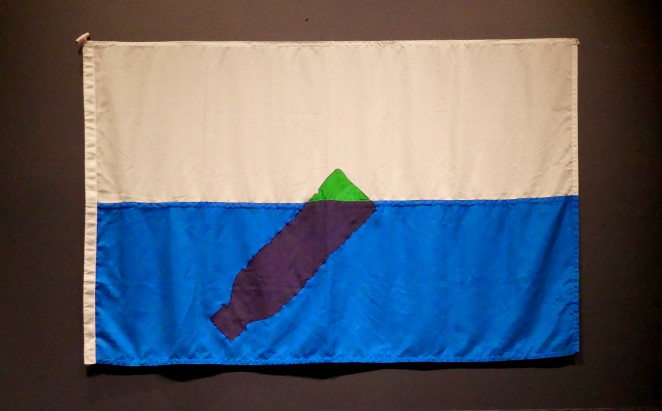 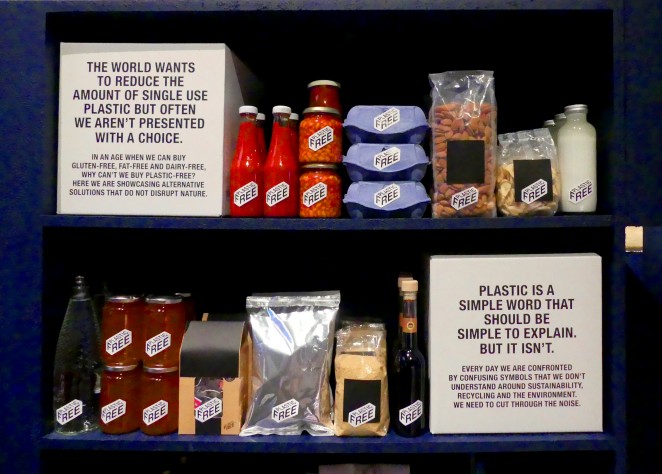 For example, finding alternatives to plastic is a recurring theme – Atelier Luma in France explores the potential of algae as a replacement for non-biodegradable plastics, harvesting natural materials and then 3D printing them. One of the first things you come across in the show is Cannes Lions winner Trash Isles, exhibited next to a plastic-free shopping aisle designed by London-based studio Made Thought.

Continuing the theme of using nature to find new solutions, Studio Zoa create leather using collagen derived from yeast, whilst Strano Research Group and MIT have found a way to turn plants into nightlights, using the enzyme that gives fireflies their glow.

In the architecture category, Sustainable Construction and Block Group have a MycoTree building, made from load-bearing mycelium – a root-like growing fungus. A cosmic idea from Officina Corpuscoli is to create a space boot that is also made from mycelium – working with human sweat to grow provisions that couldn’t otherwise be taken to Mars (should we ever get there). 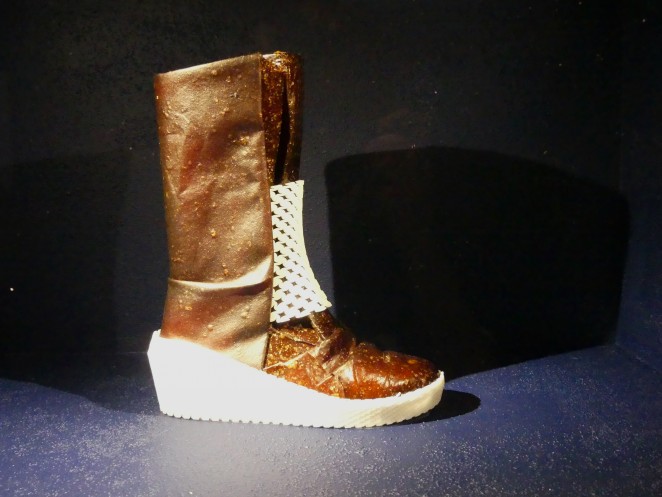 An interstellar nod to the Trash Isles is shown in the digital section by European Space Agency – is it any surprise that we’ve moved on from polluting the earth to polluting its orbit? There are an estimated 166 million micrometeoroids orbiting our planet that range in size from 1 mm to 1 cm in diameter – and 1cm is enough to damage an International Space Station, as we found out recently. 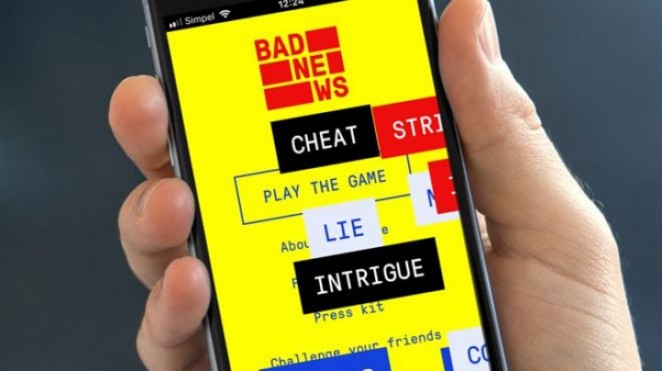 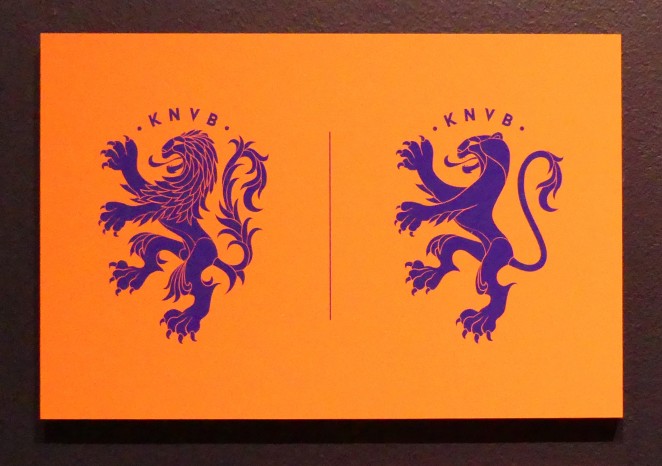 Another entry in the digital section is DROG’s Bad News, an online game that helps users build a pretend fake news profile and finally create a fake news empire. As the player progresses, they identify the tactics used to dispel fake news, hopefully becoming better able to spot the fakes in the real world.

Identity and gender are features that pop up – perhaps a little obviously with Burberry’s Rainbow Check in support of LGBTQ+ activism, but gracefully executed with the Dutch football team’s badge for the Lionesses.

Bjarke Ingels, who designed the Serpentine pavilion in 2016, has a model on show for the Lego visitor centre that has recently opened in Billund, Denmark – made from giant Lego bricks, naturally. Another witty idea, but responding to the more serious issue of rising rent costs, is a table by Paul Cocksedge from a furniture series created from tonnes of material dug from the foundations of his London studio when he was evicted – an elegant glimpse into the building’s former life. 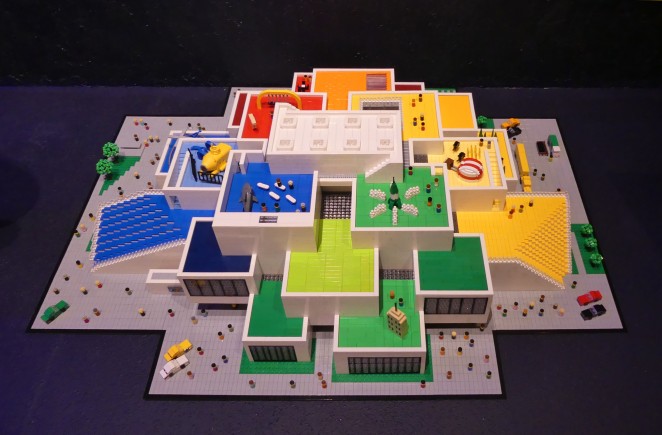 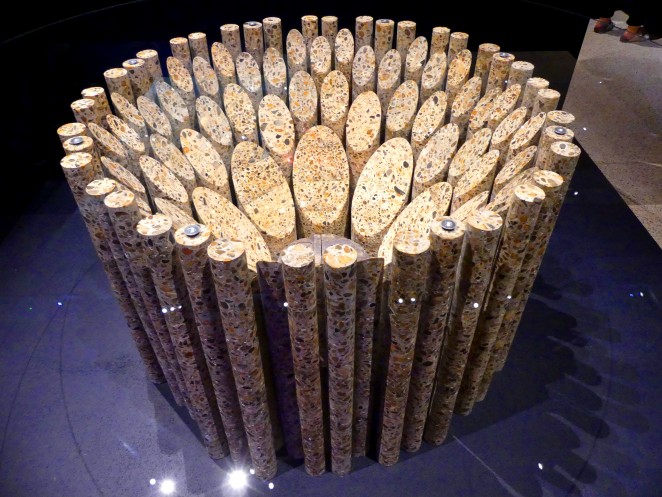 Some have used design as a platform for unity. The PyeongChang Winter Olympics medal uses Hangul, the Korean alphabet and root of North and South Korea’s shared culture. Designer Sukwoo Lee extruded the letterforms across the surface to represent stems growing from the seeds, suggesting continued growth in the culture sharing across the border.

Bolder yet is the Aravit typeface created by Israeli designer Liron Lavi Turkenich. Designed to promote peace, this experimental writing system combines elements of Hebrew and Arabic scripts, resulting in text that’s understandable byreaders of both languages, and encourages commonalities with each other. 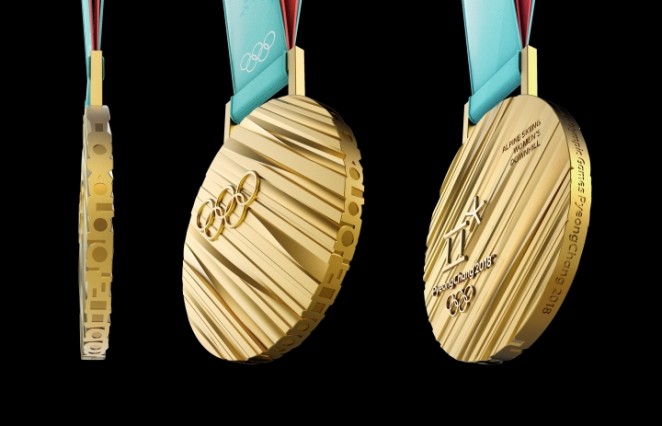 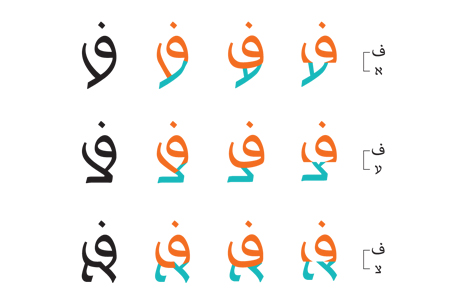 Alice Black, the museum’s director, said the awards showed “...once again that design is not just about shade and colour. It proves that design is about solutions to real world problems. It is also a show about optimism, when we need it ever so much.”

Only time will tell if this vast range of impressive design solutions have the impact intended – for good of the planet, let’s hope so.