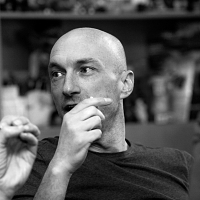 Everyone says they love the town of Shrewsbury; we wanted to find out how true it was, just curious. So we surveyed it for opinions about the place, just asking two simple questions:

We wanted people to be curious too.

So we set up an online survey, conducted face-to-face interviews and touted ourselves on social media to gather the answers from the general public.

Many people were a little wary of saying anything negative until we told them that the comments would be kept anonymous. We then made them as ‘loud’ as possible by projecting them on the walls of buildings from the studio window (I was told it’s easier to apologise after the event than ask permission before it) and left it running for a couple of hours. - the positive and the negative.

We posted stickers showing the answers and put them around. We created a booklet that shows replies on facing pages; whether it’s a good or bad thing depends on which cover the reader sees as the front.

The audios we took were animated, keeping the inflexions and personalities of the speakers (we’ll project these on the next round).

We’re looking towards a second run. This time, if we can get the technology, we’ll project around town rather than just from the studio. A reprint of the booklet (with a nicer spec), and rather than labelling existing things, we’ll print some posters to fly - Extinction Rebellion style (if we’re brave enough).

We’re looking at T-shirts and Tote bags; we’re more curious to see if anyone will show someone else’s opinion.

We’re expanding the HQ from just social media to a website. Maybe we can collect more opinions that way?

We’re an odd town, friendly to a point.

Public Opinion is about people shopping and sitting in the sun. Benches that aren’t full but still no more room. Waiting in the queue with nothing to say to hurry the bus – no raising eyebrows or sighs. The parks, the people, the friends, the history, and the pubs.

We took a survey: tell us a good thing, then tell us a bad thing, black and white. The show shouts the answers, mostly in silence, some in lights, anonymous. ‘Reticent’ describes us; it’s not ignorance or superiority; it’s sometimes a reluctance to converse. Not ‘shy’ nor ‘introvert’ they would be too harsh; reticent seems softer somehow…

Is it a good thing?
Public Opinion is to love the buildings, the people, the friends. To love the flowers and the park, the old and the new.

Is it a bad thing?
Public Opinion is to complain about the parking, the buses, the roadworks, the homeless. The money wasted on refits: “they could have done better with that…”, the traffic, the teenagers, the cold.

Add yourself to this project
studiopro:Tony was verified as a studiopro on 18th March 2022 Annual 2020 ShortlistPublic OpinionGraphic Pro member:

Tony Clarkson has been a Contributor since 9th September 2020.