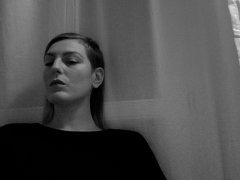 Project thesis : "The space through the light" Videomapping: "Light up!".
Supervisor: Prof. Liliana Iadeluca , Prof. Diego Zuelli Accademia di Belle Arti di Brera , Milan
Abstract:
Light is the key element in the relationship between humans and the environment that surrounds them.
The increasing attention that architecture is developing to the light is determined by the fact that it can be exploited as a parameter of spatial definition . Artificial light, rather than natural, offers superior handling and can be changed, using the optical phenomena of perception , the perception of the spatial distribution .
Assuming that the space can not be separated from lighting that invests and through the light can be perceived in a different way, then it becomes editable , not only physically but in a illusory way .
On this conception I based my project , creating a videomapping (architectural projection mapping) which has as its objective the desire to imagine new spaces through light beams .
Taking a cue from the Corner Project by James Turrell and Site Studies by Pablo Valbuena , my installation will be projected onto a corner of the wall and with the illustrations created in Adobe Illustrator and then animated in Adobe After Effect , the viewer will have access to a new reality I imagined .
The project aims to make available to the viewer the concept of perception of space , trying to go beyond the physicality of an object or a wall through which light beams are transformed into fantastic animations . Unreal worlds that involve the viewer on an emotional level and is capturing his attention by telling a story.
The immersion of the beholder to follow the animation makes my work active, usable over time. If the first goal was to go beyond the perception of
three-dimensional space (x, y, z) through the light, at the end of my research I realized that I ventured into the fourth dimension , that of time , knowledge and experience .
The videomapping can then be interpreted as either a scenic artist experiment and as dramatic as vision, not composed of real actors but by characters invented by me acting as such : they live of light on the scene, interact with the space and time .

Who pooled - “Light Up!” - Graduation Thesis

Back to “Light Up!” - Graduation Thesis project