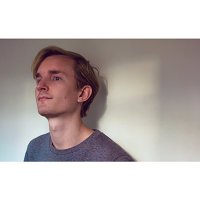 In order to bring in new clients, at Oliv we often built prototypes to demonstrate our marketing ideas and technical ability. One of my favourite demos was turning the great Mercedes "Chicken" TV spot into a full interactive game. Below is the original ad, produced by the fantastic Wieden + Kennedy.

We had given ourselves quite a challenge, take an already very successful ad campaign and show that through interactivity, it could be elevated further.

To us, it was clear we needed to find a way to allow the user to make the chicken dance. Not only would this be enjoyable but it would also reinforce the original message and engage the user on an even higher level, as they get to be control.

We only had the final, fully completed spot as an asset to produce our work, no plates or extra footage. So, after a fair amount of rotoscoping, background rebuilding and finding a suitably epic and humorous composition, I had a couple of loops ready and game interfaces worked out.

Using my demo videos above for reference, our developer team built out a test prototype. On testing we found that the experience was extremely jittery, as it was very difficult to maintain the pace at exactly 24fps by hand. We felt this took the user away from feeling that the chicken was alive and responding to the user's touch. Instead the mechanics would show through and ruin the illusion. Had we been concepting the interaction before the spot was produced, a high speed camera could've been requested. However there was no such luxury, we were working backwards after all!

Then it hit us, we needed to emulate a Dance Dance Revolution game mechanic. This meant designing a UI that the user could quickly recognise as DDR-esque and play intuitively but represented in a completely different manner so that it married with the high class luxury and refinement of the Mercedes-Benz brand.

Producing for pre-roll means that we were confined to 30 seconds runtime, therefore the flow of the ad had to be designed to cover multiple points very carefully.

- The first 3 seconds has to pull users into the idea of the ad, before they switch their attention. In this case that part was covered by the fantastic work by Wieden + Kennedy.

- Give enough lead in to explain that the ad is interactive and prepare the user for action.

- Once the interaction has started, there needs to be enough time for the user to come to terms with what is in front of them (our data from 100s of ads and millions of interactions showed that this was any where between 3-6 seconds).

- Then enough time for the interaction that the user to get a satisfying play out of it.

- And lastly 5 to 6 seconds of end card, revealing the relation of the interaction to the brand and campaign message.

As this was a spec project that I was leading, I wrote the copy, built all the visual elements and lead the development team on the execution and feel of the entire demo. Below is a video made from a screencapture, demonstrating how a user might interact with the ad.

Add yourself to this project
Project featured: on 7th September 2016