It's that time of year once again when ad land descends upon the south of France in a tsunami of designer shades and branded belt buckles for the Cannes Lions International Festival of Creativity, and those who didn't get an invite are left with their hands in their pockets. Creativepool however, is very much the bells of the ball this year. In fact, we're present at Cannes in a big way, as official partners of the event! Besides a host of podcast interviews and our now legendary annual Cannes Pool Party, the biggest festival-focused announcement for Creativepool this year is the launch of our Creative Debates, which have been created as a tonic to the endless one-way talks that tend to plague our sector.

The three Creative Debates we will be holding at Cannes this year will be lively, potentially emotional and definitely interesting discussions with some of ad lands finest, which will tackle some of the most difficult questions and topics being faced by our industry. Modelled on the debates that we all were put through during our time in school (and some of us remember rather fondly I'm sure), the idea behind Creative Debates is to take a topic and 2 teams, then set up a debate covering both sides of the argument. The aim is to give a broader understanding of the topic for not only the participants, but Creativepool members and the creative industry as a whole. The focus is on serious topics, of course, but the debate itself will be approached in a pretty light-hearted way. It is Cannes after all, so we're all there to have a good time. Mostly.

Both sides of the argument

The teams will comprise between 3 and 4 people on each side, and they will be given 4 minutes to put forward their argument (either for or against). A alarm will ring at the end of 4 minutes whereby the next speaker will be introduced. Once all the team speakers have put forward their argument, each team will be given 6 minutes to conclude their argument, and at the end of the debate there will be a general round up from the Creativepool team before it's put to a final vote. To lend an element of theatre to proceedings, there will even be a set of paddles for each participant with “Agree” and “Disagree” scribed on either side. Who needs the West End? All three debates will be held at the Hotel Le Canberra. So just early enough to make sure your wits are still about you, but not early enough to mean you can't have a bit of a lie-in.

Debate One: Advertising Versus Design (Which Matters More?)

This opening debate will ask if a brand becomes an icon without the help of a design agency? For years marketing budgets have flowed into ad agencies and design has been viewed by some as the poor relation. But some argue that this is about to change, and in a significant way. We will be canvassing views on both sides of the debate and presenting the key arguments. Questions asked will include: “Is design the bridesmaid to advertising’s bridge?” “Are ad agencies the only ones that can come up with good ideas?” and “Does design exist just to make everything look pretty?”

To quote VCCP’s Charles Vallance; “More data doesn’t mean more precision, big ideas still create the most value.” The ‘math men’ might claim that big data hones a brand's proposition to an individual consumer, but value is arguably lost when your media spend is fragmented, and the greatest brand benefits generally still come from large-scale creative campaigns. This debate will look at how brand data and over-personalising messages is affecting creativity. Topics will include the abstract question: “Just because I am a 50-year-old woman who watches knitting youtube videos does it mean I’m not interested in buying a Ducati Monster?” and the more straightforward: “How do you create a desire for a product when the data is always pointing you to a limited set of consumers?”

Debate Three: Are External Production Partners Worth It?

Taking the stance that External Production Partners are worth it, will be Glenn Taylor, Founder at Taylor James;  Jonathan Shipman, Head of Integrated Production at Framestore; and  Jon Biggs, ECE at MediaMonks.
Taking the opposing stance that External Production Partners are not worth it is: Rafael Guida, ECD at Ogilvy ; Andrew Solmssen, Managing Director at POSSIBLE ; and Todd Tilford, Chief Creative Officer, FCB Chicago.

Besides these debates, Creativepool will also be conducting a series of insightful interviews with some of the most exciting names in the worlds of advertising and design. Michael Tomes, founder of Cretivepool will be talking to Cindy Gallop, Founder & CEO of IfWeRanTheWorld; Nick Turner, CCO of SapientNitro; Jonathan Fraser, CSO at Exposure Digital, and we'll be meeting Aprais Worldwide CEO Jeremy Caplin, and Daniel Bonner, the Global CCO at Razorfish. Finally, he will be catching up with iris CCO Shaun Mcilrath; 360i CCO Pierre Lipton; HappyFinish CEO Stuart Waplington; and Ian Wharton, Group Creative Director at AKQA. 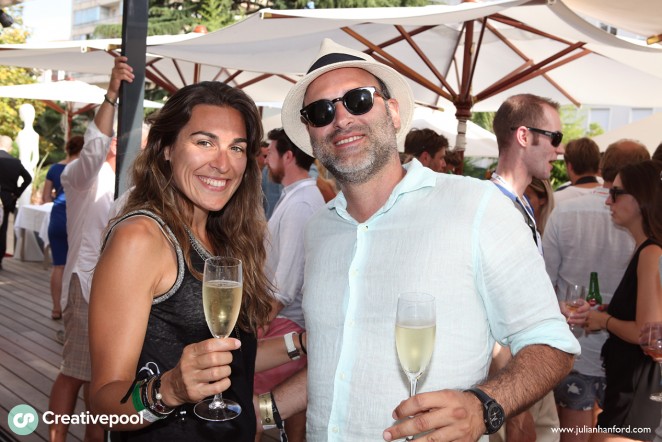 Whilst at Cannes, we'll also be taking advantage of the weather (here's hoping) and holding one of our famous Pool Parties. With an actual pool! The Pool Party Cannes 2016, co-hosted with our friends at Greenlight, is an exclusive event that invited industry leaders and close friends to celebrate creativity with a champagne reception, free drinks, a sun-kissed lounge and tunes spun by Massive Music DJs. With over 2,500 RSVPs last year, this is set to be another exciting, exclusive evening, with dynamic brands and elite agencies networking and mingling with friends, colleagues, and peers in a relaxed environment. Last year's event attracted an outstanding amount of professionals, and this year, we're going even bigger and better. T