#StandAgainstRacism: Why we need more ads like Sainsbury's Gravy Song

And why racism is still a huge problem in the UK

So one day, a November day like many others in this strange 2020, Sainsbury’s comes out with a series of three ads to celebrate Christmas, made by the folks at Wieden+Kennedy. Pretty standard procedure, following what they’ve done for many years past, and what other brands love doing too.

The three ads feature three different families getting ready for Christmas in what has been a challenging year for everyone. I watch them. I awww in front of my computer screen. Then I include all three in Creativepool’s list of the top Christmas ads of 2020. Whilst I personally have other favourites from this year (what do you mean Coca-Cola?), the Sainsbury’s ads are beautiful and send a lovely message, befitting this upcoming Christmas which, as much as it may feel familiar, will also be a lot different from what it’s always been.

Now, I don’t usually dabble around the YouTube comments section, especially if I’m in a hurry and have something else to do. So in my blissful ignorance I did not see all the awful and racist comments under the first of Sainsbury’s Christmas ads, namely Gravy Song, and I found it one lovely ad, just like the others. To me, skin colour isn’t a box to tick in a creative ad. To me, skin colour isn’t what makes something good. What I do care about is the story behind the work, and if it feels compelling to me, I’m all up for it. So I didn’t even think that there could be an issue with Gravy Song.

Until my loving partner, knowing how much I care and get triggered by such issues, came to me in shock and said: “have you seen what happened with the Sainsbury’s Christmas ad?”

If you think racism isn’t a problem anymore, you’re wrong

Having lived only in London since I moved to the UK, I’m aware I’m exposed to a limited sample of what Britain’s population thinks and believes. It was not until I saw the results of Brexit that I realised how racist some of Britain is.

According to The Conversation, around 18% of British people believe that some races are superior to others, and a staggering 44% believes that some are much more hardworking too. I’m not sure where that last statement is coming from, since no white person is known to be willing to wash dishes to earn a decent living, from the top of our ivory-cast privilege. And yet, apparently some perceive white people as being more hardworking. If you ask me, that’s a load of bull crap.

A significant vocal minority of the UK is still hugely racist.

So now that I’ve thrown some data into the mix, it really helps put things into perspective, doesn’t it? A significant, vocal minority of the UK is still hugely racist. And the fact this racism manifested itself under an ad that was about togetherness, love and coming together for the festive season is perhaps even more worrying than I could ever think.

Sainsbury’s ads attempt to spread messages of positivity and optimism in a year when all of this is very much welcome and needed. It doesn’t sugarcoat things, nor ignore the issue like some other ads have done. It recognises the hardship, builds upon it. And yet, even under this proposed positivity, messages of hate have still been able to sprout and infect what would have, otherwise, been just a beautiful ad to air on TV.

#StandAgainstRacism and the response from other retailers

Then, around a week ago, Channel 4 rallied up all of the major supermarket retailers to unite them under one flag. For an extraordinarily unique occasion, all of their Christmas ads have aired back-to-back, something that big brands usually, intentionally avoid doing.

The unjustified backlash under the Sainsbury’s ads has brought the supermarket retail industry together, which is quite amazing and indeed incredibly surprising. We are used to seeing these brands work as competitors so much that, sometimes, we forget about the people that stand behind them. And this, though coming from a dark place, was a beautiful reminder. 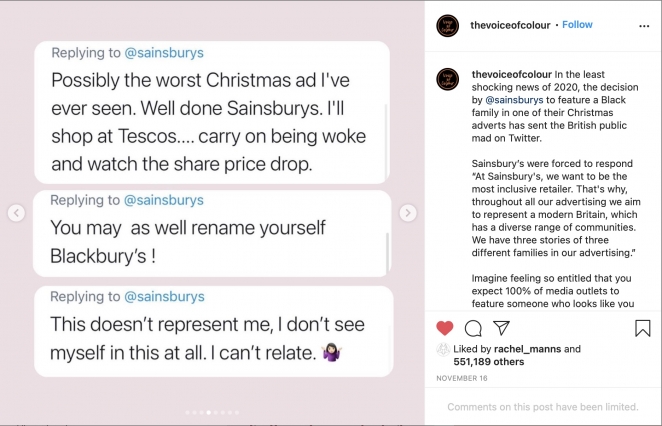 We need more people in the industry fighting racism and standing against outdated conceptions of race. To me, the fact I didn’t even notice the family in Gravy Song was black is a sign that these attempts to demolish racist preconceptions are, indeed, doing their job – that we are steadily moving towards better representation for people of diverse backgrounds. We're seeing them more, and we want to keep doing it. Or perhaps it’s a direct consequence of my upbringing, or perhaps of living in London. I have no idea. Whatever the reason, we need more ads showing us that white privileged males are not the only reality that exists.

Because sometimes we ourselves, who would always stand against racism, can forget that too.