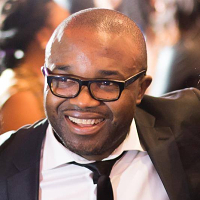 The latest production by Nollywood film director Obi Emelonye follows the story of Chinda - a renowned London actor who becomes entangled in a sextortion case against him by the criminal oligarch and digital scammer Igor. Cases of mistaken identity, webcam hacking and and threats of violence puts Chinda's family in jeopardy, as he desperately tries to find the perpetrators. The film responds to contemporary issues around data protection and cyber security in a world that has become increasingly reliant on online interaction.

I was delighted to be the production designer in this, my debut role in film production. I was tasked with:

Converting a nursery into a film set within 3 weeks . Despite being the sole designer in the team my work was complimented by the director for meeting deadlines and maintaining a high production value.

Set dressing on locations across London, collaborating with the director and film crew to source props and managing the design schedule ensure that everything was accounted for each day in time for the start of filming.

Controlling budget costs by liaising with material and props suppliers to get the lowest prices, and by building with recycled or found objects in line with more sustainable production methods.

Throughout the experience, I was pleased to work with a diverse team of creatives overcoming the challenges in devising a small-budget production, as well as gaining a greater understanding of the techniques and tropes of the Nigerian film industry. The film will be coming to Netflix early 2021.