It's finally here. The 8th of June, 2017 snap UK General Election Day. A day that will live in infamy. Probably. In all honesty, the vast majority of us are probably just glad we can finally draw a line under all of this divisive piffle tomorrow and get on with our lives. That being said, such a monumental occasion will always catalyse a few creative minds in adland to churn out some gold. We've already seen the furore surrounding Banksy and his now withdrawn piece of Tory-baiting free art and have covered the cheeky makeover given the party leaders by the i Newspaper. I also reported yesterday on BrewDog, who are giving out free beer to anyone who fulfils their civic duty and hits the polls today. It transpires, however, that these cheeky little activations were just the tip of the iceberg.

Below, I've collected what I consider to be the cream of a rather hefty crop when it comes to agencies and brands embracing the chaos and confusion of the 2017 General Election. Whomever the victor, it appears adland is in fine fettle and will be able to adapt to whatever horrors the Conservatives or Labour (because let's be honest, it's a two party system in all but name) have in store for us over the next three years. 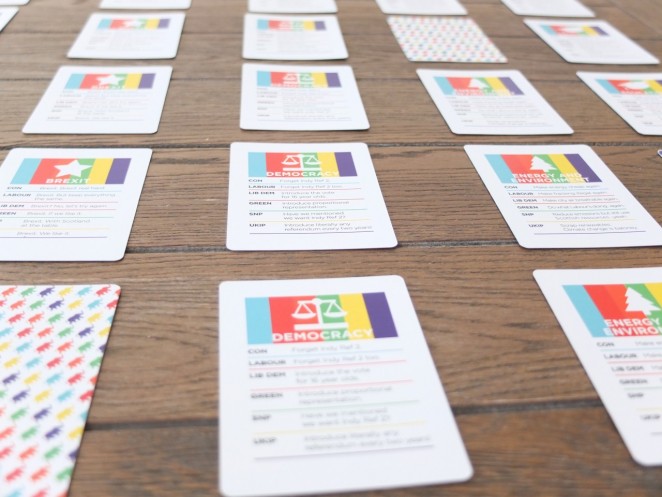 Irritated by the impenetrability of UK political manifestos for the election, two young creatives at London ad agency Crispin Porter and Bogusky have created an easy and fun way for voters to tell one party from another. Together they have boiled the parties’ stances on key issues down to taglines – and used them to create a pack of tongue-in-cheek ‘Snap’ playing cards. Olivia Adda and her creative partner Bryn Jones-Walters will be distributing the Snap cards (clever pun there guys) to undecided commuters in the King’s Cross area early this week. For those not lucky enough to get their hands on a pack of the Election Snap, the cards can be viewed – and downloaded for free – online. Jones-Walters said: “Our beloved political parties each have a manifesto that’s about 12 inches deep and harder to read than Chinese graffiti. So we’ve translated things for the great British public, distilling things down and putting key take aways on cards, each with an ‘issue’ icon. Simply match two icons on the cards, take a second to read the corresponding policies, and find out exactly who you should vote for this election.” It's genuinely funny stuff, though I'm not 100% sure it's all true. It's very obviously anti-Tory (are you surprised though?). Also, do UKIP really want to end sexual education? You can download your own General Election Snap set RIGHT HERE.

This tongue-in-cheek “Want Seats? Get Seats” spot (above) from CHI&Partners will run throughout Election Day, heroing Argos’ Fast Track Same Day Service whilst poking some sly fun at the electoral process. Argos have today unveiled an Election Special TV spot as part of its “80 Days of Argos” campaign – which sees a new, topical, date-stamped ad run each day, spotlighting Argos’ market-leading same-day delivery service. Created by CHI&Partners, the tongue-in-cheek 8th June spot shows a Habitat seat in a range of colours, along with the message: “Want seats 8th June? Get seats 8th June.” The ad will run across TV, digital and social media and marks the ninth week of the 80-day campaign – which draws on real-world events and important dates within the national calendar as well as responding to consumer data and the Great British weather in order to serve a relevant, topical ad each day. Media planning on the campaign was by Mindshare with social and content work by AllTogetherNow.

McCann wonders what would happen if brands ran Britain 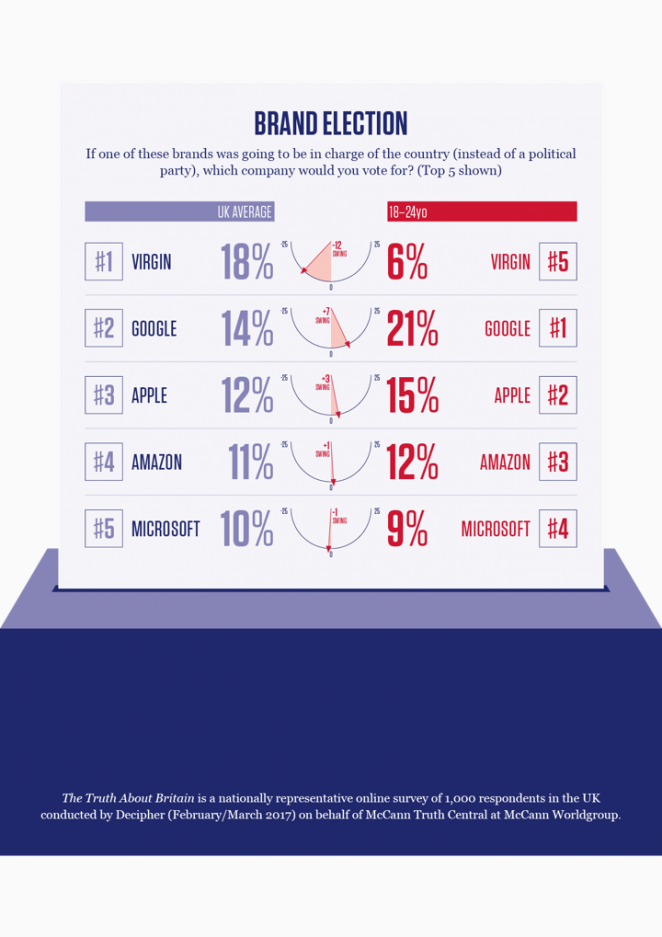 Tired of the relentless election campaigns? In the recent Truth About Britain research initiative by McCann UK, participants were given the opportunity to choose who they would vote for in the upcoming election - but with a difference. In this hypothetical election, participants were asked which brand or company (not which political party) would be best suited to lead the country. And the outcome? The most trusted brands to lead the country are those that provide a truly meaningful role in their everyday lives. However, it's not just utility that distinguishes the winners from the losers - winners tend to be inspiring, innovative, and iconoclastic. The brand chosen to lead the country is Virgin (18% of general public) - a British-born brand and a global hybrid of television provider, airline, radio station, mobile telephone service, hotelier, etc. Fronted by a charismatic, British, self-made entrepreneur, Virgin leads for all segments of the population with the exception of Gen-Z who overwhelmingly voted for Google instead (21%). This is not to say that global tech giants like Google, Apple, and Microsoft do not generate support in this brand election amongst other demographics - in fact, the research showed a close nationwide tie between Google (14%), Apple (12%), Amazon (11%), and Microsoft (10%). Interestingly, while the vote tally for any one brand does not result in a clear majority - the predominant nationwide view (58%) is that “brands must stand up for what they believe in.” Brand should, however, be wary of making outright political statements - almost half of Brits believe that brands shouldn't get involved in making political statements (48%), while for another third this type of brand activism is unimportant. While this week's general election is clearly not a contest between brands, the results should provide insights not only for brands and marketers, but perhaps a few lessons for our politicians too, whoever the next leader of our country will be. 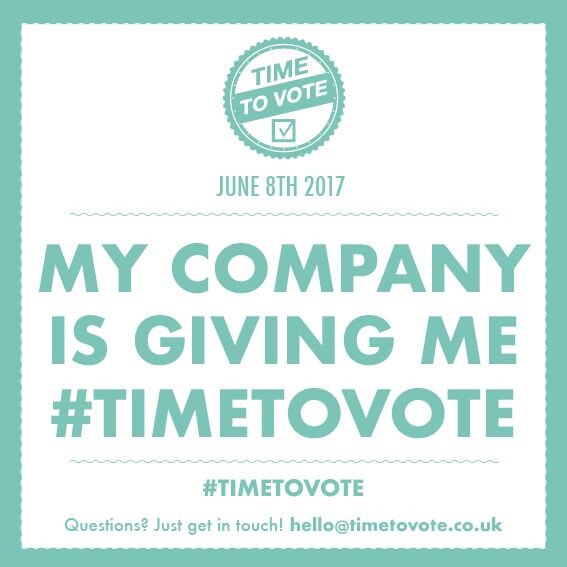 Advertising sold on democracy Industry’s employers lead the way in supporting #TimeToVote initiative, which asks for bosses to make a pledge to flexible working arrangements during today's election to help employees exercise their democratic right to vote. To help keep the campaign front of mind on election day, staff will also be encouraged to post a ‘selfie’ from the polling station on social media with the hashtag #TimeToVote. Wieden & Kennedy, Brothers & Sisters and Creature of London are among the dozens of agencies signed up to the non-partisan initiative ahead of the general election. A third of registered voters didn’t cast their ballot in the last general election and research shows that when people plan their trip to the polling booth in advance, they are significantly more likely to vote. It is not just the advertising industry supporting the cause in the UK either. Creative companies such as comedian Steve Coogan’s Big Cow and film star Colin Firth’s Raindog Films are also on-board, along with leading technology firms Skimlinks and Quantum Black. W+K ECD Iain Tait, said of the initiative: “Time To Vote seemed like something we couldn’t not do. Getting people to turn out for these elections is more important than ever whatever your political leanings.” Well said sir!

The Best of the official spots 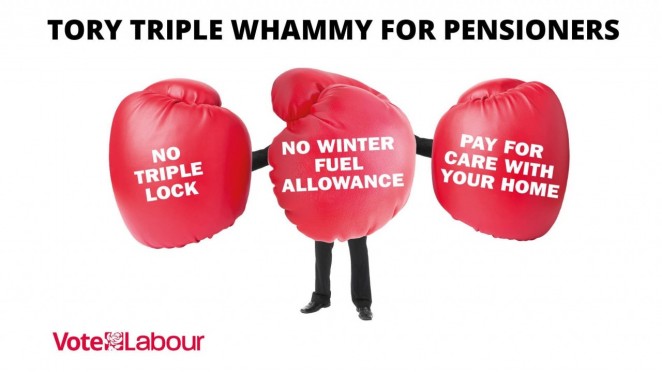 The two main parties, in my eyes, haven't really been able to keep up with the underdogs when it comes to creativity in their message delivery. The Conservatives have stuck to the party line down to a T and if I hear the phrase “strong and stable” one more time after today is dust I might just implode. You have to hand it, however, to a certain Yorkshire Conservative candidate whose wonderfully horrible campaign video recently went viral (below)

Labour meanwhile, have kept things remarkably (and wisely) sincere, with a campaign video directed by none other than Ken Loach. I, however, much prefer the parody video by the party agency of record krow (below), which turns Theresa May into a Benny Hill character. Marvellous. That being said, it's outside the main two parties where the real genius lies.

The Green Party ramped up its general election campaign with the release of its genuinely clever party election broadcast; a retro-looking ad for bogus board game. The spot, dubbed #ChangeTheGame, sports the hallmarks of 90s kids advertising, with an overly-enthusiastic narrator, saturated colour, a generic nuclear family and even Comic Sans titles! It’s the fourth spot produced for the Greens by Creature of London. Last year it created the acclaimed “Not so secret life of five-year-old politicians” spot, which featured child actors dressed as parliamentarians in a in a playground. Stu Outhwaite, chief creative officer at Creature, said: “You'd have to have been a raging sadist to be excited when the election was called. Well, either that or the creative agency that gets to make the Green Party's broadcast. The process (all two weeks of it) was a dream: we hope the finished spot might prove to be a bit of a nightmare for the other parties. Let's change the game.”

Speaking of humorous digs at the electoral clustersmudge, Now has created a parody election film for the Women’s Equality Party, which stars PR consultant Siobhan Sharpe (actress Jessica Hynes) of the acclaimed BBC comedy programme W1A. The film sees Sharpe asked a series of questions around whether she believes in social equality, whether she is a feminist and whether she would vote for the Women’s Equality party. It's funny and eye-opening stuff. Melissa Robertson, chief executive of Now, said: “It's all like this massive no-brainer. We all want more equality, and it turns out that, apparently, there's literally enough equality to go around. It just needs everyone to have it. Big thanks to the awesome Jessica Hynes for turning round a powerhouse 'Siobhan Sharpe' performance.”

Best of the rest

Remember your first time by 4Creative

Vote for your voice by Halo 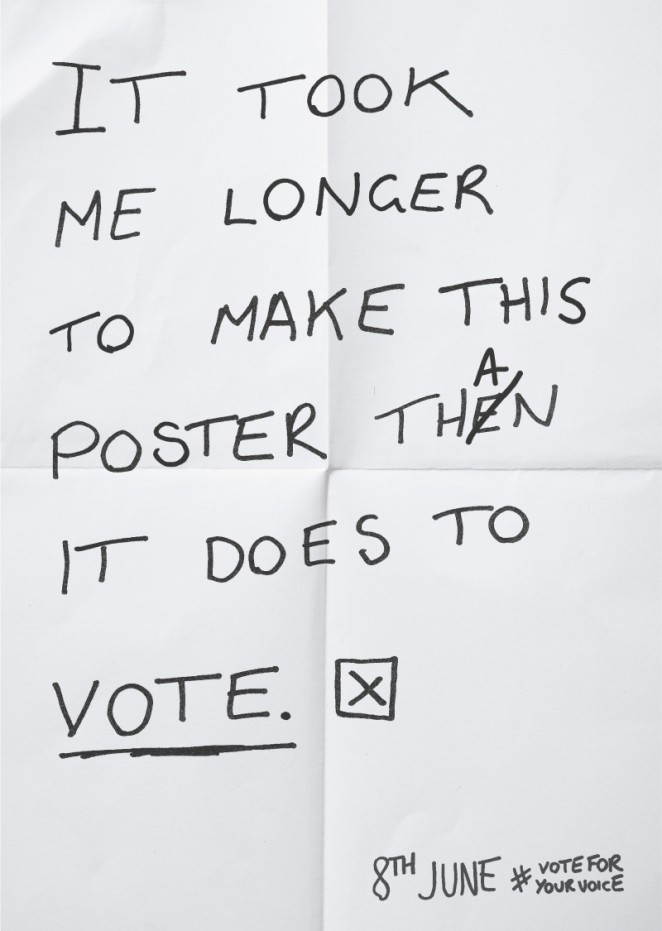 One of the biggest problems we face with the election is that people don't use their vote. Sometimes the message of forcing your ideas upon people can be too much. Along with Jamie Ellul at Supple Studio, Halo created posters that have a simple message to the younger generation: Vote!

The CBA Party by Forever Beta

Forever Beta has created the first party election broadcast for the Can’t Be Arsed Party – the fake group who represent the 15.9 million people who didn’t vote in the last election – in a subversive campaign to get the population to the polls on 8 June. British comedian Nas Osmanoglu fronts the film and Private Eye editor Ian Hislop also puts in a guest cameo.

Benjamin Hiorns is a writer and musician from Kidderminster in the UK. For more electiony goodness, you can click the following links to read up on how Jeremy Corbyn is owning search engines and how advertisers could learn a lesson from THAT Tory catchphrase.