COVID might not be in the rearview mirror just yet but it’s at least starting to feel like it. So, with the first traces of sunshine now officially hitting our high streets, we thought it was about time to take a look at a marketing medium that has been understandably neglected in recent years - OOH.

With the world returning to relative normalcy (the situation in Ukraine notwithstanding), OOH is once again a powerful medium for brands and we thought it was time to celebrate this defiantly traditional and yet surprisingly forward-thinking sector of adland. With major brands such as Nike launching exciting OOH campaigns, we reached out to a few leading OOH industry experts to discuss their favourite campaigns of recent years.

Jackson has worked with the “Immersive Experience Company” for brands as diverse as YouTube, Coca-Cola and Expo2020. He has many years of experience specialising in video technologies and projection mapping.

Any 3D campaign on these new OOH digital landmarks has to be given credit…and that’s why I love this campaign by Nike. Marking Air Max Day (one of my favourite days I must admit) Nike launched its first 3D anamorphic campaign in Tokyo's Shinjuku district.

So visually beautiful it’s hard to take your eyes off it so no wonder the campaign reach was so phenomenal it saturated the market. The attention to detail is amazing especially in the creative. They have rendered animated content to seamlessly blend in the surroundings, making the edges of the screen almost disappear – it’s a clever use of a surrounding façade.

The weightless technique (floating content) works amazingly well and the fact they decided to create a box on a curved screen – superb! With technology advancing, anamorphic creative is now taking OOH to a new level where people have no choice but to pay attention. The biggest impact this has on the industry is the content legacy.

This OOH content is not meant to just be seen by a live audience, it is clearly created for online. The fact that I love it and I haven’t seen it live shows how powerful and emotive this new second hand content is. The campaign has been so thought through from a social aspect that the Nike tick at the end of the content sits perfectly in the middle of a 1x1 crop.  Nike are trailblazers and I’m sure other brands will be following in their footsteps with campaigns like this one!

George focuses on creative for commerce at the experiential advertising agency. He previously worked as an Associate Creative Director at TBWA and as the Retail Creative Head at VCCP. George lives in east London with his wife and their dog Biscuit. In his spare time he’s an avid motorcycle enthusiast. 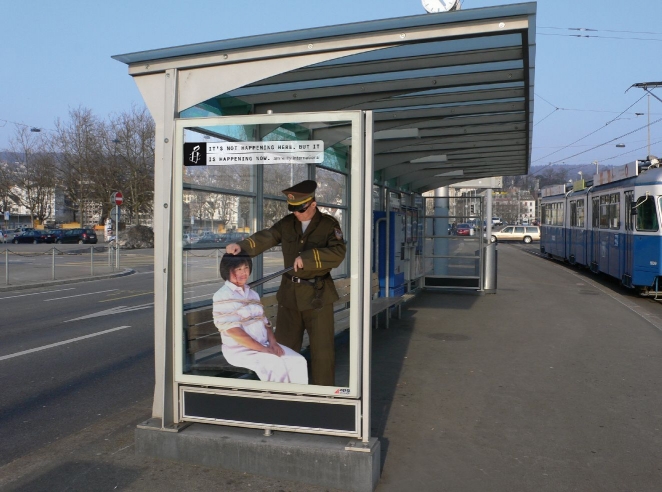 This campaign for Amnesty International Switzerland called “It’s not happening here, but it is happening now” is nearly ten years old, but its message feels even more pertinent today. The first time I saw it, I was immediately struck by its bold, confronting use of OOH.

Those who are familiar with these executions are privy to its many accolades, and rightfully so - it demonstrates the power and impact of OOH. Each poster, cleverly and perfectly placed, immerses itself into the viewers' surroundings while displaying real scenes of human rights abuse. The execution masterfully balances the sensitivity and gut-wrenching imagery of complicated storytelling.

For me, the best part is how powerful the insight is because it forces the viewer to confront and consider the messaging (‘It’s not happening here, but it is happening now.’), a message that is translatable and understood all over the world.

Produced by Zurich-based agency Walker, the initial run consisted of only 200 posters throughout Switzerland. This did little to prevent the campaign from achieving worldwide success, as it quickly transcended the medium and crossed over to TV and print - a benchmark for a truly impactful piece of OOH. Overall, this campaign was impossible to ignore and hard to forget.

Megan Price, Co-Founder at Be The Fox

Meg started her career making award-winning comedy series such as Gavin and Stacey, The Mighty Boosch and Live at The Apollo. With over a decade of TV comedy and factual production experience to her name, she joined forces with Director Diana Ellis-Hill to establish the female-founded creative content agency Be The Fox. From the get go the Brighton-based agency has been producing integrated campaigns for standout brands such as Samsung, Honda, Bulldog Skincare and Nissan, often breaking gender norms and specialising in automotive and tech.

In 2013, British Airways’ #Look Up campaign landed at Piccadilly Circus. You’ll likely remember it - media coverage was heavy and the plethora of awards must have demanded some seriously reinforced shelves in the Ogilvy office. But I'll recap for anyone who may have missed this gem. Interactive billboards showed young kids pointing excitedly up at real BA planes flying overhead, and captions told onlookers where the plane had taken off. At a time where flying had become the norm, BA brought back all the wonder of taking to the sky and exploring far off lands.

Even now, this would be pretty top creative. Nearly ten years ago, it was an industry game changer. See, as cute as kids are, BA couldn’t have hours of them doing nothing until a plane jetted by – especially not at Piccadilly prices! So Ogilvy took advantage of the emerging ability for brands to “share media”. Existing adverts on the board were interrupted by BA at opportune moments. Standard now, but a big leap then.

The tech was also brilliant – antennae read the aircraft’s transponder for destination and meteorological data decided if the cloud height allowed the plane to be clearly seen from the ground. Cool, right?

But the real achievement of the campaign was that the tech didn’t become the thing. The campaign oozed charm, tapping into that childhood experience of looking up at a plane and wondering where it was off to. In every way BA acted in the way it wanted to be perceived – category leaders and magic makers.