"In the western world we have preconceived notions on what it's like to be queer in certain countries".

The story behind Emma and Ryan is particularly interesting in itself. Two creative professionals uniting to change the world with their craft. No wonder these two have both been shortlisted as Emerging Talents of the Year in the Annual 2020 awards – and the Gay Times campaign, wrapped up during COVID times for Amplifund to shatter preconceptions about being queer outside of western countries, is a living, tangible proof of their impressive skills and drive.

This week we are getting Behind the Idea to learn more about queer stories, typographic storytelling and the untamable energy of a passionate, two-headed creative team. 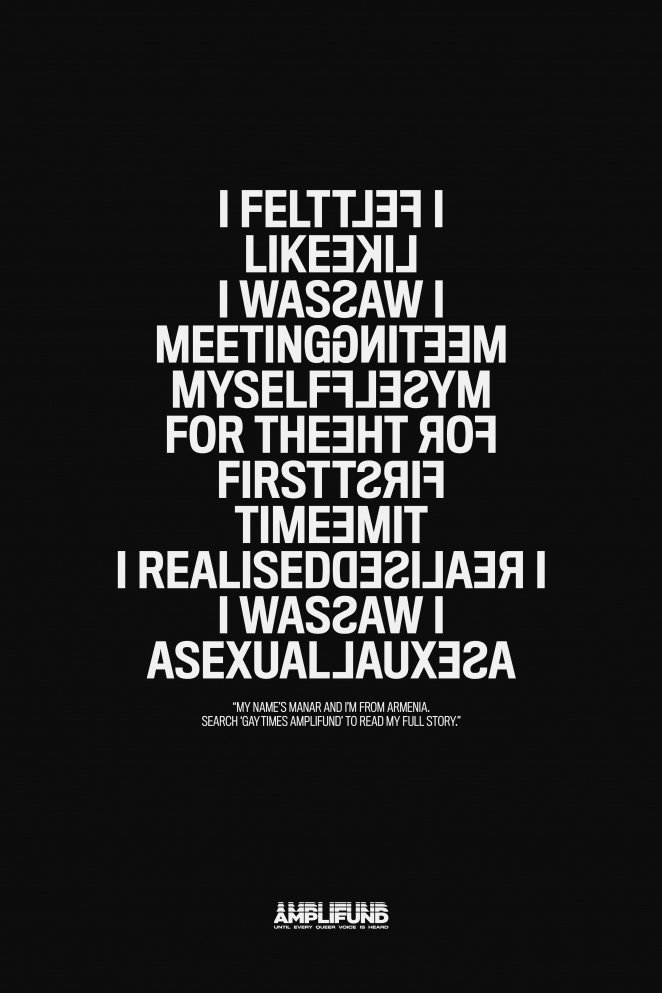 The brief was all about getting the voices of queer people heard. Voices from places where people have a preconceived notion of what it’s like to be queer there. Places like Iraq, Armenia and Jamaica. We wanted to challenge peoples’ unconscious bias and encourage them to educate themselves on other people’s experiences.

We knew we needed to be true to the real stories. Using their words as much as possible in order to tell their stories. Too often we see words put into the mouths of non-western queer communities. Early on, we decided we wanted to create a host of editorial content that the comms could point people to, rather than just creating traditional ‘ads’. 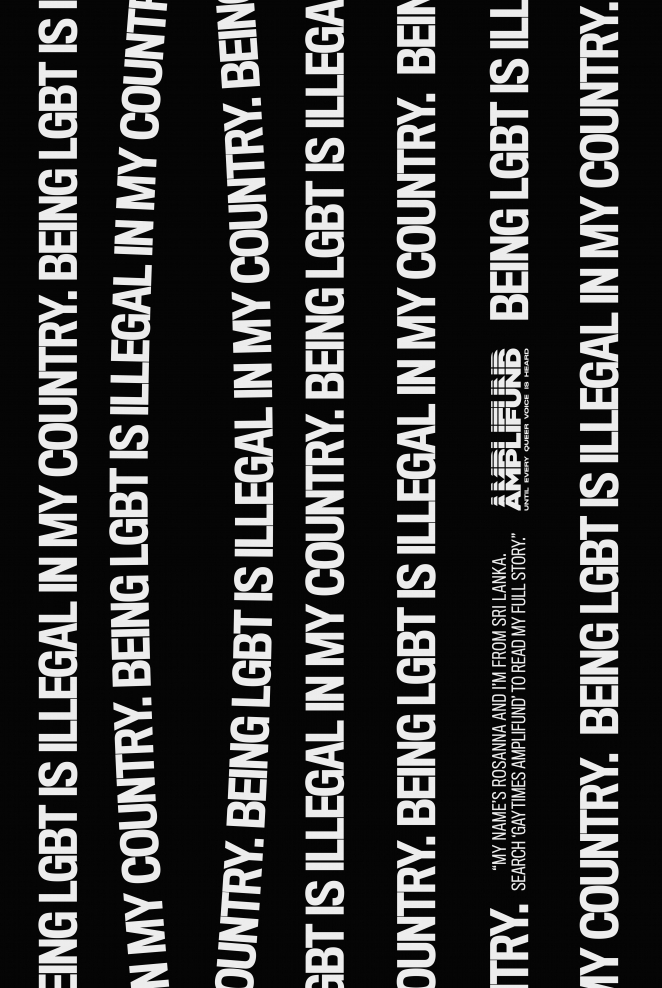 We didn’t want to use imagery - imagery comes with its own unconscious bias. We wanted people to be intrigued by what they were seeing, to stop and read and then go on to actively try and find out more. Creating a conceptual typographic piece felt like the best way for us to achieve this. To simply let the words tell the story and the art direction become part of the message itself. 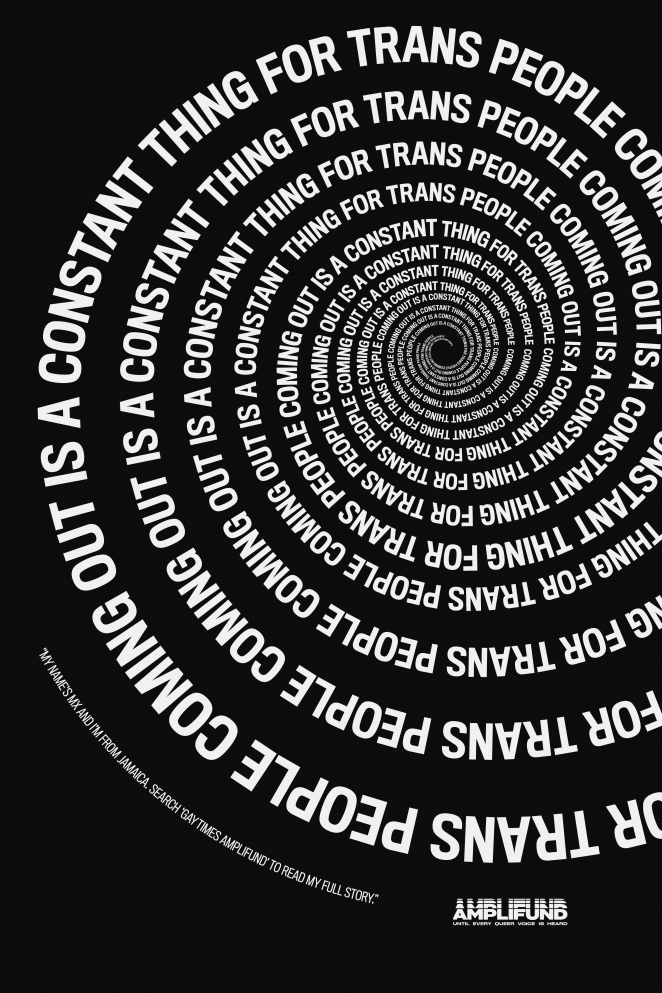 This piece was concepted pre-Covid and we were supposed to launch earlier in the year but we delayed until a more appropriate time – and we used that time to keep pushing the work. The process was really smooth as we had a tight-knit team that worked on it which really helped us get this over the line. We worked really closely with the clients over at Gay Times to bring this to life and make sure it was as authentic as possible. They have been so supportive and collaborative. One of the big challenges, like anything pro-bono, was getting the media space, but the team at Mediacom pulled in lots of favours to get these out there in the world. Particularly impressive in such a turbulent climate. 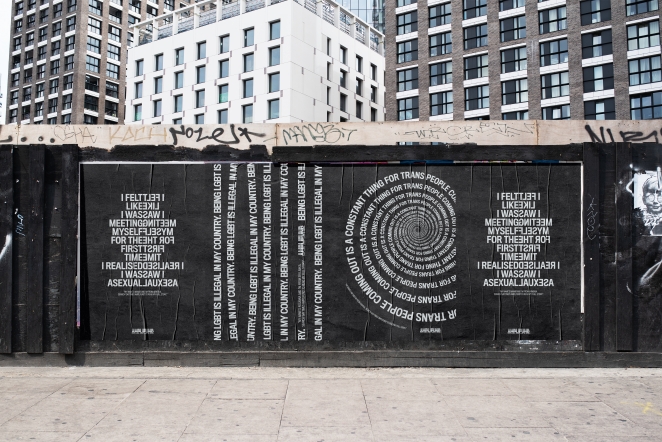 It’s all about getting every queer voice heard. The message is super important. In the western world we have preconceived notions on what it’s like to be queer in certain countries. All of the work from the print, social and digital, right up to the editorial content start to break down those preconceptions. There are queer people all over the world living their true selves, it just might not be where we first thought it was. Given the current climate of the world it felt like a great time, when people are showing more empathy, to get this message out. 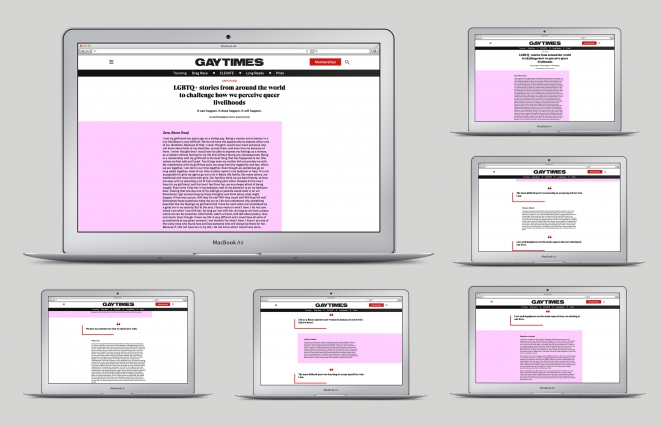 This isn’t another pride ad. This isn’t a rainbow wash. This isn’t something that happens for one month of the year. This doesn’t make the community feel tokenistic or ‘on trend’ for a month. This is about keeping queer voices talking loud and proud all year long. It’s also giving them something new, giving them an insight into something they didn’t necessarily know. This is the year of personal growth and we’ve delivered something that enables people to do just that.

These are stories we haven’t heard before, from people we didn’t expect to have these kinds of stories. Gay Times have such a huge global reach that although they are UK based, these stories have been heard all over the world. 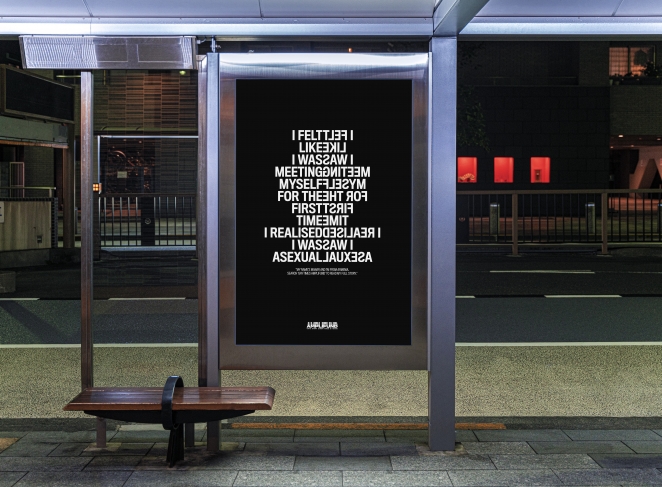 We’ve been working on this account for over a year now and for us, it’s an ongoing project. We’re constantly looking for the next thing we can do. This particular campaign probably took about six months all in all – not including a COVID pause. But time isn’t really a luxury you often get on briefs anymore. So, it honestly was a breath of fresh air to take our time and focus on the craft, not just of the design but of the journey of the campaign as a whole. 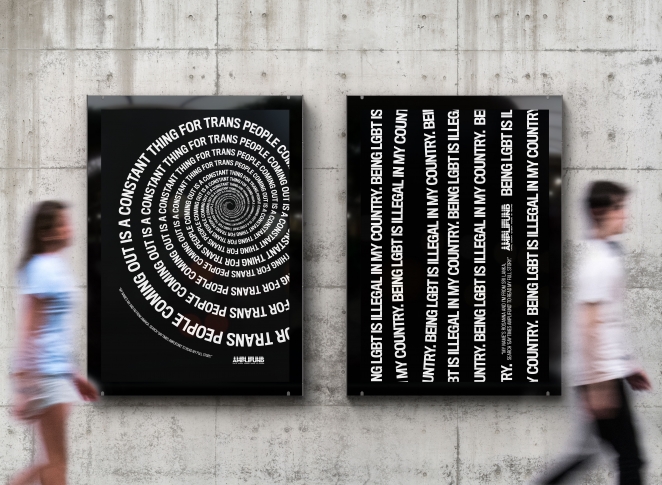 We hope it helps to bring a clear understanding of what Amplifund does. Amplifund is such an incredibly unique charity that’s doing amazing work. Putting the power into people’s hands, they support media outlets in countries that it’s harder to be queer in. Empowering them and giving the community a voice. They are a new charity, only launched in 2019, so we’re really hoping this helps put them on people’s radar to enable them to keep doing the amazing work they’ve already started to do.

And equally importantly, we hope people see the work, read the stories, and learn about perspectives that differ from their own.