Just two months ago Rihanna tweeted a picture of herself on a medical drip, pumping herself full of vitamins after suffering from exhaustion and dehydration following a hectic tour schedule combined with wild partying.

Now she is the billboard girl for Vita Coco, the market-leader in the sector of coconut water, apparently the healthiest thing on the planet to drink and one of the best ways to rehydrate yourself.

This is all part of Vita Coco's bizarre campaign to boost its revenue to £25m and follow in the footsteps of Red Bull and Innocent as the drinks industry's rising star. 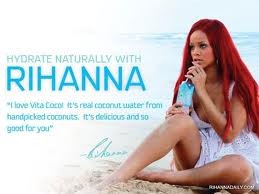 Vita Coco launched in the UK in 2010 and have stayed at a grass roots level since then, securing a loyal following which has earnt them a 96% share of the category.
The streets of Hackney are plastered with images of an impossibly healthy Rihanna while rumours start to fly that she might cancel her headline slot at Radio 1 Hackney Big Weekend this Sunday due to exhaustion and probably some more dehydration.
Maybe she should make more use of that lifetime supply of Vita Coco.

Of course this is not the first time a totally baffling celebrity endorsement has occurred. Who can forget Iggy Pop's leathery torso, uncovered for Swiftcover car insurance? 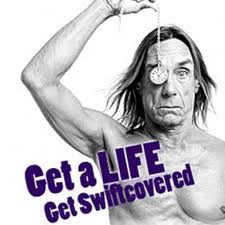 In 2009 he admitted to The Times that he was embarrassed about the whole saga. After all, there is nothing remotely rock and roll about insurance.

He managed to redeem himself in some sort of punk fashion when the advert was banned by the ASA after the NME correctly pointed out that Swiftcover do not insure entertainers or musicians, making Iggy's claim of "I got it covered. I got insurance on my insurance!" totally misleading.


Another big shock came when Johnny Rotten decided he should start selling Country Life butter. He actually helped to rescue Dairy Crest from the brink of administration and helped their profits to increase by 85%.
Unlike Iggy, John Lydon has always defended his puzzling career move and has always implied that the Country Life adverts helped him fund his Public Image Limited tour. 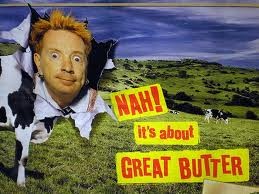 Lydon told the Camden New Journal: "Why are they questioning me? What manual am I supposed to adopt? I'm promoting a British product which I'm very proud of. Anything I can do to help British industry is fine by me and in return you've got PiL."


Whilst plastering punk and rocks biggest names all over your product might get the world talking and boost your profits, it's worth choosing your celebrity endorser carefully and raiding the "Heat" archives before you start polishing them up to be something they ain't.

It is also worth remembering that certain relationships, such as punk and insurance, were never meant to become a partnership and will just leave the British public mourning the death of authenticity, forced to live in a world where capitalism means more than rock 'n' roll.

The Intense Strength of Teamwork with TBWA\ANG

Teamwork is at the essence of many jobs well done. Having been the DISRUPTION® company for decades, TBWA has a long record of amazing storytelling, disruptive design and a close, caring eye on social and community needs. But really, all of this...