Life as a junior. Be prepared to work hardest of all.

Starting out in the creative industry can be hard for anyone, and you should be prepared to feel as though you are doing more work than the MD or CEO. The basics are easy, arrive first or go home last (whichever is noticed), and pretty much be available for any little jobs that might need doing. I still remember my first job like it was yesterday, 12 years ago when I started out in the pre-press/reprographics department of a local printing firm.

My contract stated that I was responsible for preparing artwork for print, and maintaining the two plate-making machines we owned. However, the reality was much different and the list of tasks that I did felt never-ending. I hated those first few months, but everything changed the day I managed to pluck up the confidence to complain to my manager, and his words of wisdom have stayed with me to this day, and have shaped my work ethic and mentality every day since.

We worked shift patterns, week one was 6 a.m. until 2 p.m, and week two was 2 p.m. until 10 p.m. On the early shift, I had to have a coffee waiting on my manager's desk for 6:05 a.m when he arrived. My daily morning tasks were to unlock all the doors and turn on all the lights and computers in 10 rooms over two buildings, open all the shutters, and turn on the two plate making machines. The plate makers needed plates ordering in packs of 12 at a time, 50 plates per pack, and they were heavy. Not as heavy though, as the 20-litre tubs of developer that we ordered, 6 tubs at a time, and yes you guessed it, my job was to bring them in. 12 packs of plates and 6 tubs of developer up two flights of stairs in the rain, sleet, snow, the wind, and the occasional heatwave, twice a week.

Preparing work to go to print felt like it was enough for a full-time job, you had to make sure you got the most out of an SRA2 sized sheet of paper to minimise waste, check and double check all supplied artwork, print out mock-ups of said artwork to check everything folded and bound correctly, and then package up and send out those mock-ups for sign off from the clients. The plate making machines needed the developer drained once a week, and all the rollers had to be cleaned down to remove the excess gunk that accumulated on them. The laser drums were fragile and we had to be constantly on the phone liaising with Heidelberg when anything that went wrong. 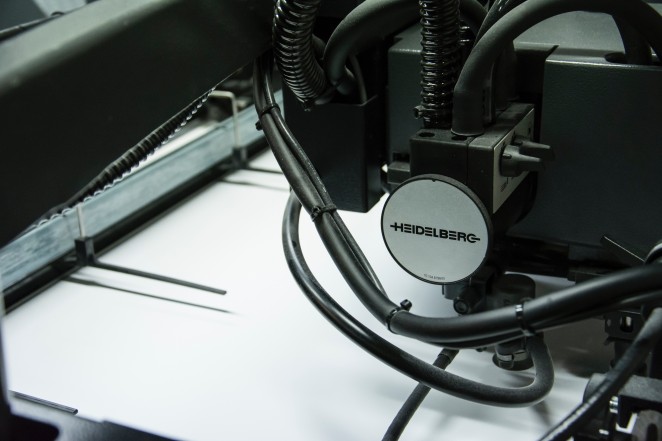 My manager, or Wilky as we called him, always found the time to put me into every possible depart he could think of whenever I had a spare moment, or even when I didn't. He sent me downstairs to work on the 10 colour printing press which really annoyed me as the printers were on around £25 per hour yet I was on a measly £16,000 per annum. Sometimes he would send me over to the finishing department to help with collating, running machines, moving pallets, boxing up prints for delivery, and sometimes going through print mistakes, tediously unpicking saddle-stitched brochures to remove a four-page section, so we could still reuse the rest of the brochure. I would even help out with the drivers if they needed help to carry or load stock.

What really drove me over the edge though in those early days was getting lunch for people, taking several orders at a time and often forgetting my own lunch as a result and having to go back to the shops. About 6 months into my 3-year stint I finally plucked up the courage to complain to my manager. "Wilky, I'm sick of going to get lunch for people, I've had enough, it's really winding me up as it's taken me nearly 2 hours to sort everyone's change out and chase everyone around the building." His advice a stuck with me to this day "Jason" he said, "make yourself invaluable to me and I will stop them taking advantage of you being a junior, fair enough?"

At that moment I decided to be happy and positive about everywhere he sent me in the building, whereas prior to that moment I had been down and moody, dragging my knuckles around like they had mops attached to them. This was a new me and I was going to be happy no matter where I was sent within the company. If he sent me to the finishing department I was going to make sure that I worked twice as hard as anybody working there. If I was sent to the printing department I was going to make sure I paid attention to everything they told me to do, and I started being the first to show up and the last to leave.

Nothing changed straight away but around three months later, one of the lads came into the office and shouted across the room "Jay are you taking orders?" I hadn't time to respond when Wilky stood up in front of everyone and shouted: "No he's not doing that anymore he's too important to me." I immediately felt valued, and I quietly smiled to myself. What was more interesting though is in those three months I didn't have to pretend to smile and be happy, as people respected me more because I was making the effort and taking an interest, and in return I had a greater insight on what their roles actually entailed, I respected them more for their skill sets.

I was learning and as Tony Robbins says: "Even if you're not where you want to be yet if you're on the road if you're improving if you're making progress, you're going to love it, you're going to feel alive." I'm the type of person who needs to be learning, and I've never been content showing up for work collecting a wage and going home since.

When the time finally came for me to move on from the printing firm, I managed to land a role as a designer at a small advertising agency on the outskirts of Manchester, and what was immediately noticeable was what my manager had done for me. He had given me a full understanding of the entire printing company and had set me up for life by making me understand the printing process from start through to the finish. I have no idea if that was his intention but deep down I believe it was, and a couple of months later I sent him an email to thank him for everything he had done for me. I took the state of mind I had developed into my new job was the first to show up the last to leave as much as possible. Learning everything I could from every person willing to show me. Making hundreds of cups of tea, and always was willing to work overtime.

So never mind the fact that somebody is on more money than you or does less work, it's because of their experience that they have got to that position, and more often than not, it's not that they're doing less work than you or not working as hard as you, but that they are probably working smarter than you and quicker as a result of their years experience within the industry.

Any time an aspiring junior has asked me for advice in the lasts 5 or 6 years, I always say make yourself invaluable. Even now I am still learning and the people I look up to say the same thing. You should never be unwilling to do any job even if you think it's beneath you because the likelihood is everyone in that company has gone through the same thing you're going through, so you're more likely to earn respect doing it without hesitation. Above all else be willing to brew up, as the majority of us in the creative industries live off cups of tea and coffee. The more you put in at the beginning the better off you will be in the end.