Driving the Mental Health Conversation with Movember and Matta

One can only imagine which wonders a global pandemic has made to those who suffer from mental health issues. If engaging in conversations about mental health was harsh before being locked up at home for months, it's discouraging to think what has happened in the past few months and how many more challenges may have arisen for all of us.

Unfortunately, the stigma of talking about one's mental health is far from removed and this is true for women just as much as men, who are sometimes afraid to be seen as vulnerable in the eyes of society, employers or friends. That is why charity Movember has launched the Movember Conversations, a practical toolset to help men talk more about their mental health.

For this Behind the Idea, we've had a chat with senior producer Tom Winfield from digital agency Matta, who worked with Movember to reshape the Conversations around the mental health of men. 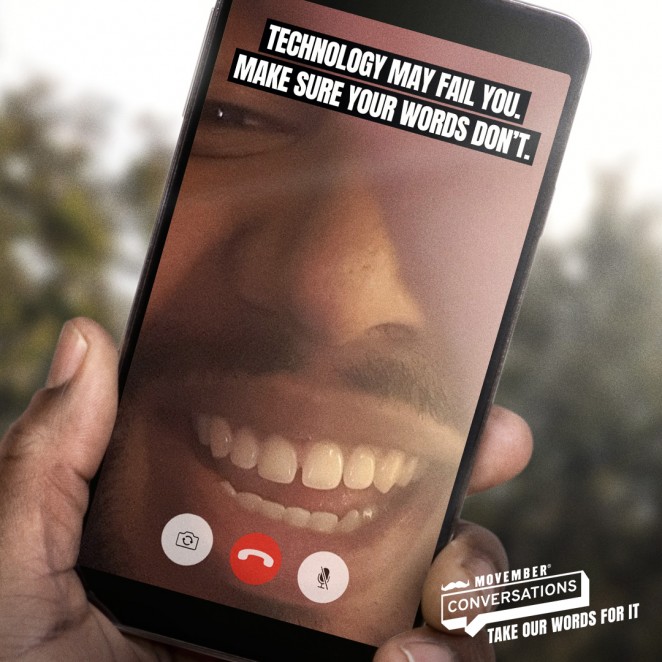 The brief called for an innovative creative concept that would compel people to engage with Movember’s online conversation guides.

The key target was to drive traffic to Movember Conversations - a series of tools designed to help support men who are looking to reach out to friends or family members who may be struggling. The tools deal with issues such as job loss, isolation and work/life balance.

The timing of the brief was motivated by an ambition to coincide with the COVID-19 crisis. As it’s been a time when so many individuals across the world have faced new hardships - whether personal or professional - the expectation was that there may be a greater number of people than ever searching for tools like Movember Conversations. And while the advice offered by Movember of course has a life and a value which extends far beyond the current crisis (as part of the charity’s ongoing work to change the face of men’s mental health) COVID-19 certainly put a greater time pressure on the campaign.

There were four target territories specified in the brief - the UK, the US, Canada and Australia. It was made explicit that our response should address how the campaign would flex in order to deliver assets tailored to each target territory. 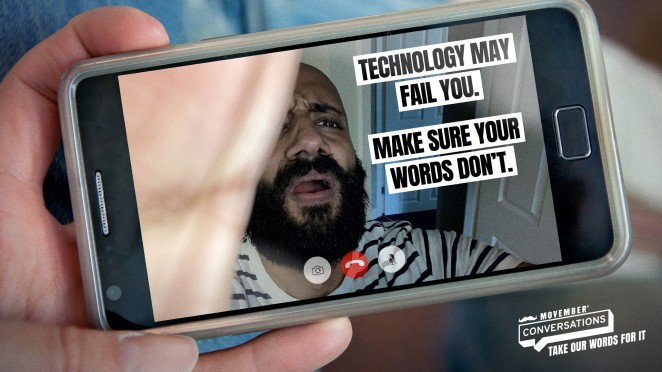 Ultimately, the challenge was to provide a compelling call-to-action that would inspire people to visit Movember’s online resources.

The initial brainstorming phase was incredibly positive, with a healthy variety of ideas floating around. It wasn’t without its challenges, however, as there were a number of tensions identified within the brief. Chiefly amongst these was Movember’s hope to create a campaign which balanced the brand’s well-known sense of humour against the weight of the serious subject matter being dealt with.

Finding an appropriate trade-off here was a key discussion point for all stakeholders, while also ensuring that product messaging remained clear and consistent. 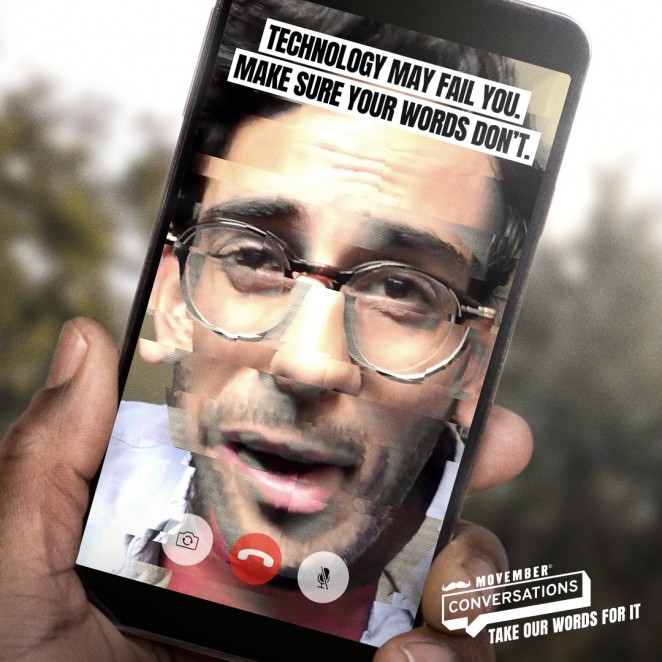 The chosen concept accurately captures elements of the lockdown zeitgeist, but does so without falling into the trap of being too gloomy or downhearted. I believe this is why it was received so well and proved to be the winning idea.

The campaign plays back an all-too-common experience - that of the notorious video call fail. Whether amusing or frustrating, technical problems seem to be all-encompassing for many of us atthis moment in time. And while we may all be getting lots more video call practise during lockdown, there remains very little sign that any of us are actually getting the hang of it.

In MATTA’s experience at least, it’s very rare that a working day goes by without a handful of technical hitches! 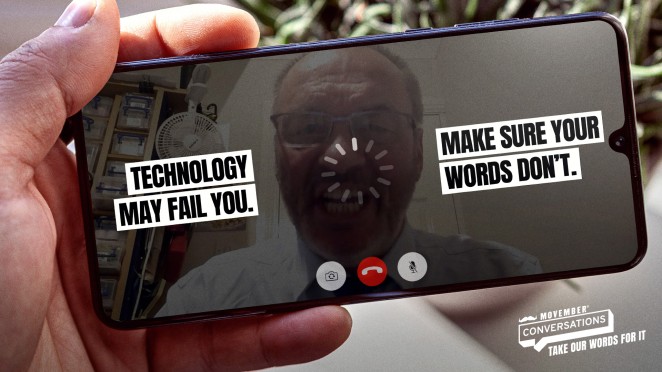 Our virtual shoot took place in early May, during which time there were significant barriers to organising any ‘traditional’ production. Social distancing precautions in place in the UK and abroad created insurance problems and also begged the question about the civic responsibilities of the companies involved. The creative lent itself very well to this environment, however, as we were able to lean into the UGC space. Actors doubled up as camera operators, set dressers and stylists, with Movember, MATTA and our Director (Simon Neal of UNIT9) dialling-in for each scene.

In general, this approach was very successful. A few technical challenges aside (only appropriate really!), the shoot went very smoothly and I believe everyone involved was grateful to have the opportunity to earn their ‘lockdown production stripes’.

Even actors doubled up as camera operators, set dressers and stylists

One - with hindsight, perhaps inevitable - result of the approach taken is that we came away from the shoot with an incredible amount of footage. Caution from all sides due to the unfamiliar circumstances meant that we kept rolling on occasions for a little longer than we perhaps ought to. Looking back, this certainly proved a challenge for the edit team and put a great deal of pressure on the post-production process, as organising the raw footage ended up a far bigger task than we’d anticipated.

While lockdown brought about many challenges, it’s also worth noting that it provided us with opportunities as well. As we took the decision to organise a virtual shoot, we were considerably less restricted by the locations of our actors than we would have otherwise been. This allowed a far broader net to be cast when searching for talent. 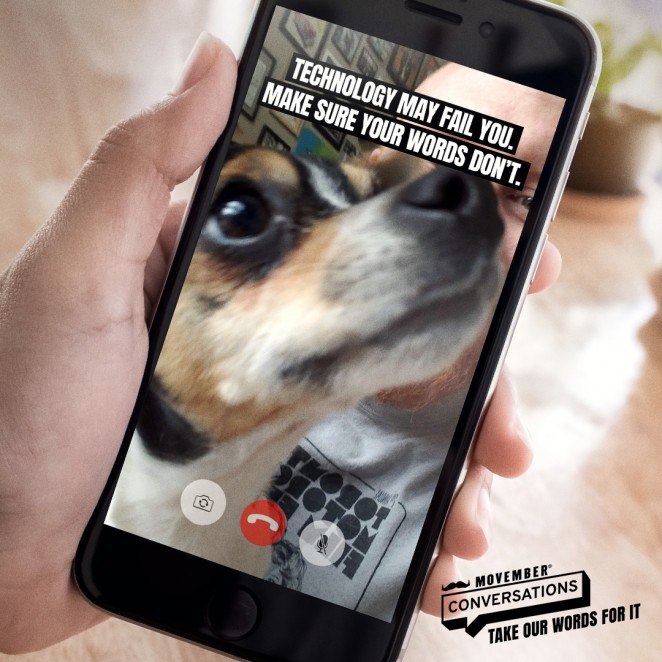 Reaching out to a friend during tough times can be difficult, but this campaign is not designed to expressly address that point.

While the importance of actually taking the first steps to arrange a conversation is a critical and ongoing aspect of Movember’s mental health work, the aim of this campaign - and indeed of the Movember Conversations product - is not to motivate the initial “Hello”. Instead, the hope is that the product can help men to to tackle what happens afterwards. Movember Conversations acknowledges that it is not only difficult to arrange a call in the first instance, but it can be even more challenging to know what to do next.

It’s this distinction which pulls Movember’s message away from the one being delivered by various other brands and charities during the COVID-19 crisis, and similarly it is why the campaign matters. The product, and subsequently our campaign, does not only set-up a proposition (i.e. that serious conversations are important) but goes an extra step, looking to educate people about how to be a sensitive and helpful conversation partner.

Worth also noting here that the Movember Conversations tools themselves are excellent. Bitesize and interactive, they do a brilliant job of distilling some really important lessons into a number of easy-to-remember rules/tips. The campaign was always likely to matter given the important job that the product is set up to do.

This particular concept took around 4 weeks from first presentation to delivery of the launch assets. That period encompassed script development, casting, shoot prep and the full edit/artworking phase. Bespoke assets were delivered across four different territories (UK, US,Canada and Australia), as well as in two different languages (English/French). 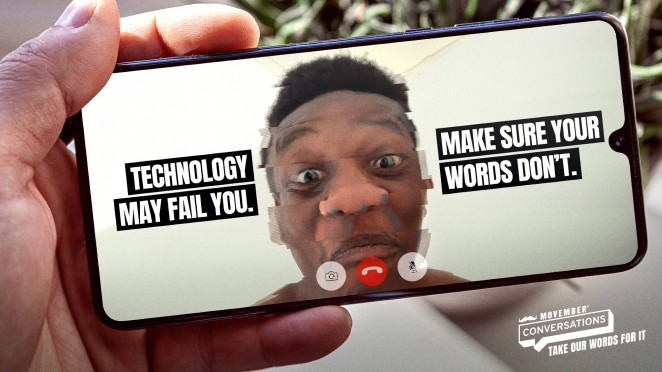 We’re all very hopeful that the campaign will succeed in driving lots of traffic to movember.com/conversations, and - ultimately - arming guys with the tools they need to confront what can otherwise be very tricky topics. That’s the key indicator of success in this instance, more so than traditional brand-building.

That said, we believe that the campaign stays true to Movember’s brand character. It’s humorous and accessible, while also delivering a degree of tenderness and vulnerability. Movember’s brand is so powerful because it’s human. This is always at the forefront of our mind when working on Mo briefs. While Movember Conversations is a new tool, which does have a language and a colour palette of its own, the decision was made to keep our campaign very much in Movember’s more well-established brand world. We hope this will help with consumer recognition.

It may sound cliché, but there’s always a sense of satisfaction when work finally goes live. Given the unfamiliar circumstances we all currently find ourselves in, however, and the potential that Movember’s conversations guides have to help people to deal with some of the challenges they face, this particular project was even more pleasing than usual.

Movember are a brilliant charity who do so much incredible work for men’s health. Everyone at MATTA is very proud to list them among our clients, and - hopefully - to continue delivering work which has the power to make a tangible difference.

Not all the consequences of COVID-19 make the headlines. A simple sentence, enough to have us focus in on one of the unspoken issues of the pandemic. LGBTQ abuse has risen tremendously during lockdown, and social distancing has pulled off the plug...

The importance of bravery, boundaries and beliefs in the performance arts “Argue for your limitations, and sure enough they’re yours” Richard Bach, ‘Illusions’ , Arrow Books, 1988 The book ‘Illusions’ by...

Posted by: James Sampson
SHOW FOOTER
Creativepool uses cookies. We will assume that, by using the website, you agree to this.
Read More Accept