A bus stop that encourages people to talk to each other, signposts that respond to your mood and a zebra crossing which doubles up as a 30-second party are among the designs shortlisted for the Playable City Award. The Playable City project encourages designers to think about the future city with people and play at the centre. It's essentially a means of exploring how technology is going to improve how cities around the globe work to help people connect with one another. Considering how many naysayers will argue that technology has been used primarily to distance us from one another, it's a necessary and exciting concept that has already captured the imaginations of cities as diverse as Tokyo, Lago and Bristol. 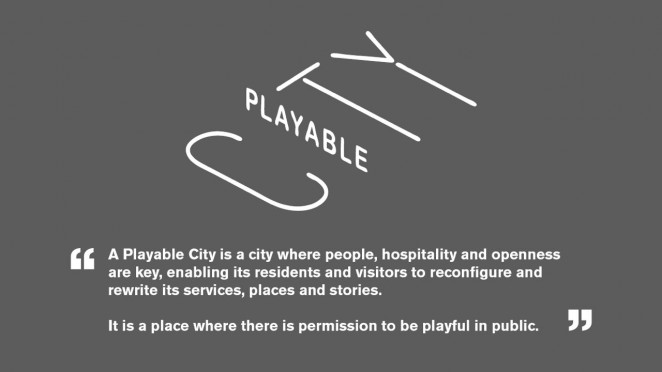 The project was created on the premise that half the world’s population now lives in cities and that, despite a focus on transport infrastructure, how city dwellers feel about their journeys, what form they would like them to take, and how they spend their time, is rarely considered. Playable City recently has announced a shortlist of projects that encapsulate the Playable City ideal, each of which are vying for a £30,000 cash prize and the chance to see their project created on the streets of Bristol before travelling to other global participating cities.

There are eight shortlisted projects in total:- 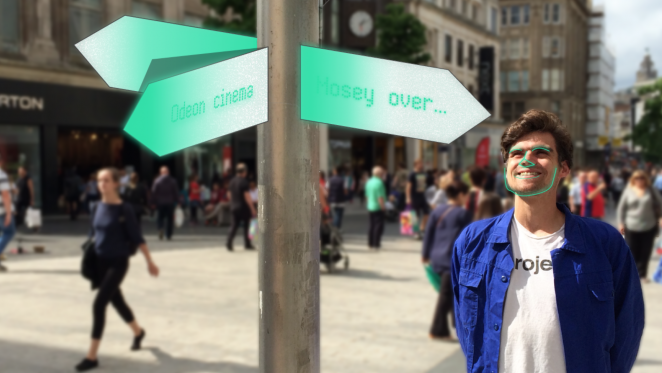 Happy Place reinterprets signposts as experiences to move visitors and locals both physically and emotionally across the city. Signposts equipped with interactive displays will reveal a small excursion, but just if the person in front of it looks happy. A camera system will detect the user’s expression in front of the signpost. When they smile a text will slowly start to appear in the sign led display, showing the full content if the user smiles for long enough and starting to disappear again if the user stops smiling. Drawing from research that suggests that smiling is actually effective in improving mood, and with the possibility to engage community in gathering interesting facts related to locations around the city, Happy Place wants to give new life and meaning to street signs in the digital age, not only encouraging happier demeanours but also bringing people together in a playful and engaging way. 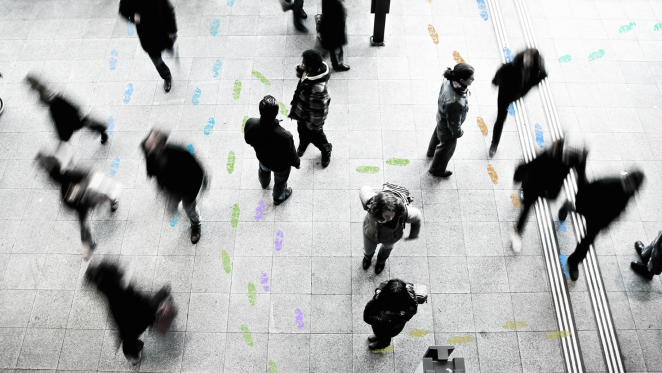 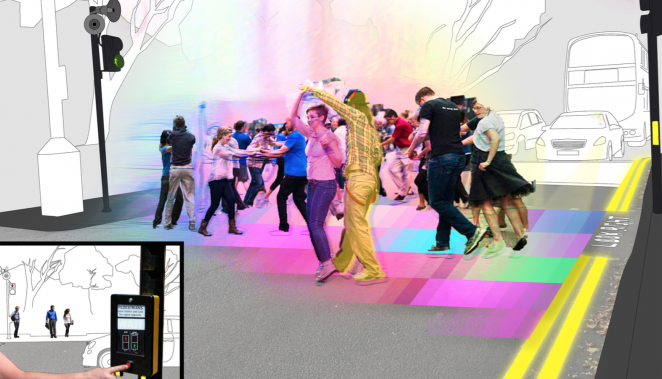 “Stop, Wait, Dance, Walk” will transform a pedestrian crossing into a 30-second party! It is a playful intervention at pedestrian crossings that brings strangers together for a moment of shared fun, breaking the mundane ‘stop and walk’ routine. When a pedestrian pushes the button at the crossing, an unexpected experience will unfold. Speakers and a dance floor will be enabled, and a spotlight will invite the pedestrian to move to the centre of the street. As further people join the dance floor, more and more of the crossing’s surrounding furniture will progressively light up and transform into a disco! All the transformations will be co-created with members of the local community to the crossing.

The Conversing Circuit by Urban Conga 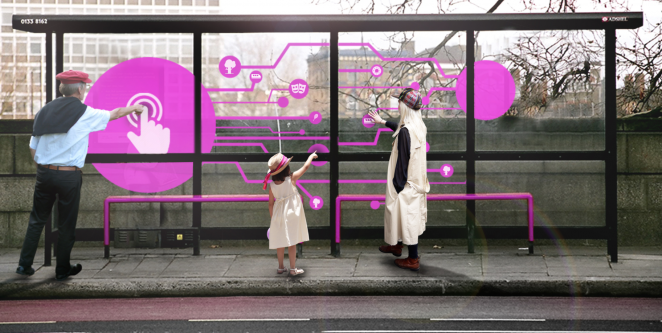 The Conversing Circuit is about creating a conversation between a person and the environment around them. The installation focuses on sight, sound, and touch to trigger different levels of play with in the space. The attractive visuals encourage one to touch the installation in which triggers different sounds and lights to emit from the transit shelter. The design of the circuit is based off a map of key locations within the city. Each of these key locations is represented by an icon that emits a certain sound or light within the space.

In Dance Step City, passersby are given license to dance their way down the street, turning a few steps from an ordinary walk into a playful and magical journey. The installation uses a combination of overhead laser projectors, similar to the ones used in laser shows and directional audio to create a rhythmic journey down a section of pedestrian walkway. Inspired by classic scenes like Gene Kelly dancing through puddles in Singing in the Rain, Dance Step City will offer a set of dance steps tailored to the environment, that take participants on a playful romp. Participants will be able to simply follow along the steps like a multimedia hopscotch grid or add their individual flair to the steps, creating their own performative journey. 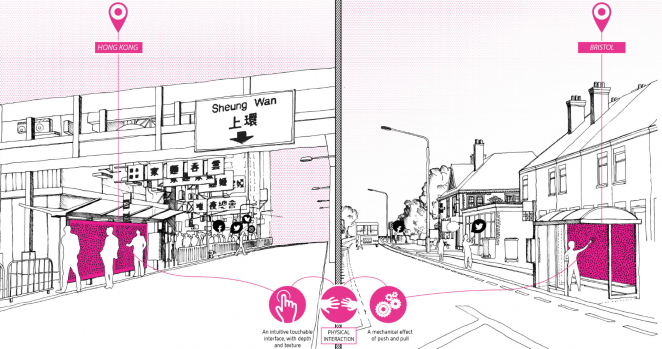 Im[press]ion blurs the boundary between the digital and the physical in its romantic venture to make tangible a remote digital interaction. Formally, Im[press]ion is a scaled-up version of the small pin-screen toys for children. It works using a dipole of dynamic and responsive pin-boards to form two unique, connected surfaces. Together, pin boards create dipoles of identical surfaces, that each displays forms recorded and created by pressing the pins of the other. The interaction is not forced and people can activate it without realising the function of the object. Consequently, users are not required to have any technological knowledge; one accidental lean or touch would suffice for the dipole to work. Based on intuition users should feel a connection to each other as opposed to the technology that is facilitating it. 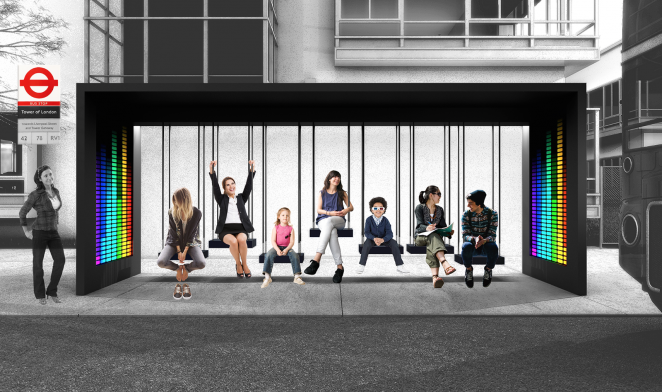 Make Your Rhythm is an appropriate waiting area which gives passengers the opportunity of having fun while they are waiting for the bus. At the first glance, the seats of this bus stop seem like swings that invite people to sit; but actually, similar to spring seats, the main direction of movement is vertical. Another exciting aspect is that each seat is linked to the column of LEDs which will light up by seat’s movement. Turning on the LEDs located in sidewalls in harmony with the intensity of up and down movement of seats motivates people to engage more or compete to achieve high-level of colourful LED light in comparison with others. Also, watching the harmony of movement and colours at this bus stop will catch the standing passengers attention and amuse them.

Paths is a public space musical instrument and light installation. The playful experience celebrates the journey of a cyclist traversing an urban environment. The movement of cyclists through monitored spaces will trigger synchronised audio and visual representation. Paths will transform the cyclists daily commute into a playful performance accessible to the wider public. Paths will utilise a combination of motion sensors, speakers and lights strategically positioned along cycling paths. A group of sensors will be placed along paths to pick up motion over set distances. Grouped sections will be matched with audio and light segments that when combined will create a beautiful symphony. Paths will be installed in a limited number of locations of interest such as crossings with other cycling paths, interesting architectural/environmental locations and areas of high traffic and pedestrian congestion.

The winner will be announced on 27 October and can use the £30,000 prize money for research and development. They will also have access to professional advice and the facilities of Watershed’s Pervasive Media Studio in Bristol.