Anyone who has ever cursed the name of a blue shell or screamed bloody murder at a well placed banana peel will undoubtedly be planning a trip to Japan at some point in the near future. I'm referring, of course, to the Nintendo theme park currently being built at Universal Studios in Osaka, Japan, which should reportedly be ready just in time for the 2020 Olympic Games. Whilst similar parks will eventually be built in Universal Studios parks in Orlando and Hollywood, it feels right to me that the first country to experience real life Nintendo fun should be the country of the legendary gaming company's origins, and given that many of Nintendo's top brass are helping with the creative process behind the venture, my hopes were already pretty high.

The first official trailer for Super Nintendo World, however, has blown even my lofty expectations out of the park (pun intended). The video appears to reveal a number of themed zones, and gives a surprisingly in-depth (though purely theoretical at this point) view of the park's planned layout. The trailer starts with Mario entering a green tunnel to make his way into the park (a logical entrance for a Nintendo-centric world) before he moves between distinct areas including both Princess Peach's and Bowser's Castles. We finish by seeing see Mario make his way up a typical platform level to give a general overview of the park, which is full of Super Mario iconography. It's incredibly cheesy of course, but if the finished product ends up being even half as impressive a the trailer (above) then I'll be sated. 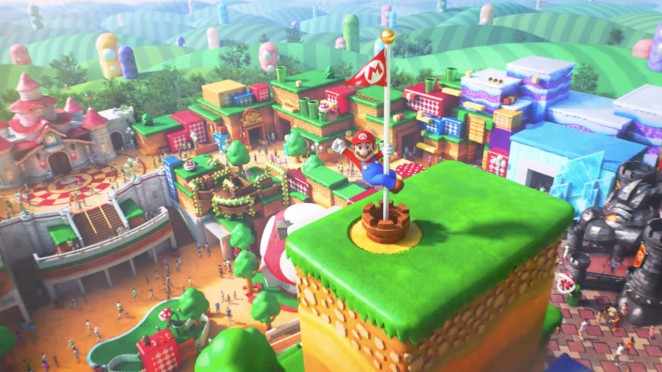 The video was dropped on the day of the park's groundbreaking ceremony (below), which took place last week. During the ceremony, we also got an official announcement of the first official ride to be built at the park, the tentatively titled “Super Mario Kart Experience.” Now, whether this will be a generic go karting track with a few bells and whistles thrown in, a 3D movie experience, a roller coaster or something else entirely remains to be seen, but we have been assured it will be an experience like “none other ever seen” and will be the most “cutting edge attraction” Universal have ever attempted. So here's hoping for something pretty special!

That's all of the official news, but I also learned (just this morning in fact) that some of the concepts for the theme park have already leaked. You can see the plans for yourselves below, but please take into account that these are just rumours and could easily be fan mock-ups. The leaks (below) include an entire region dedicated to The Legend of Zelda, which itself houses a “Hyrule Castle” attraction, an area for kids themed around pink windbag Kirby and a Donkey Kong roller coaster, which has it's very own island. The main bulk of the map, however, seems to be taken up by the great Italian plumber. On closer inspection, the plans also reveal a “Pokémon Training Academy.”

More clues can also be sourced from the numerous patents (below) recently filed by Universal and Nintendo. First up we have the “Simulator Ride” patent, which shows people strapped into harnesses that can seemingly be moved side-to-side and up and down. There's also a patent for something called the “Boom Coaster,” which might be the aforementioned Donkey Kong coaster. The patent shows mine carts attached to a rail, which can jump over pits and obstacles. Maybe at the player’s behest? Or maybe the riders get to choose their own path? Wouldn't that be something!? This is all speculation of course, but whatever shape Super Nintendo Land ends up taking, I'll certainly be along for the ride! 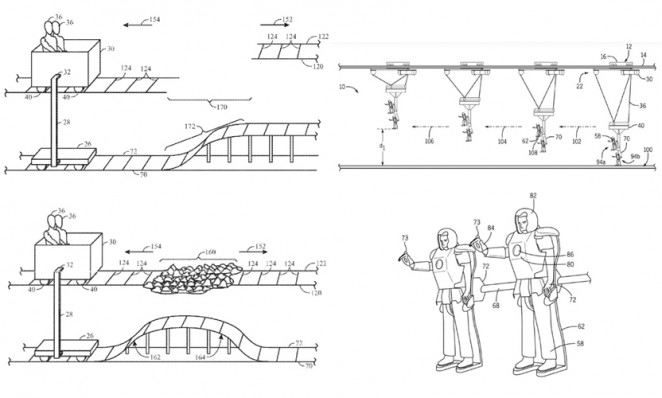