According to Warc, the global marketing intelligence service, developments in Virtual Reality (VR) and Augmented Reality (AR) will offer viable ways for brands to engage emotionally with consumers in 2017. VR, which immerses consumers in a 360-degree digital environment, most commonly experienced via a headset, and AR, the integration of the real-world environment with computer-generated digital information, have been identified in Warc’s Toolkit 2017, produced in association with Deloitte Digital, as key marketing trends which marketers will be looking to in the coming year.

David Tiltman, Warc’s Head of Content, said: “VR and AR are not new technologies – but 2016 saw them really emerge as marketing platforms. A lot of money is now going towards VR in particular as brands seek fresh ways to engage consumers. As the advertising marketplace becomes more cluttered and many people opt out of receiving marketing messages, brand experiences that can cut through are increasingly valuable.”

Jason Warnes, Digital Marketing Partner of Deloitte Digital, added: “Disruptive digital technologies, such as VR and AR, are being used to define, develop and rapidly deploy new experiences to improve the customer journey. Despite a limited adaptation of some of these technologies, they should be seen as new opportunities to interact with customers and understand more about their behaviours and preferences.” 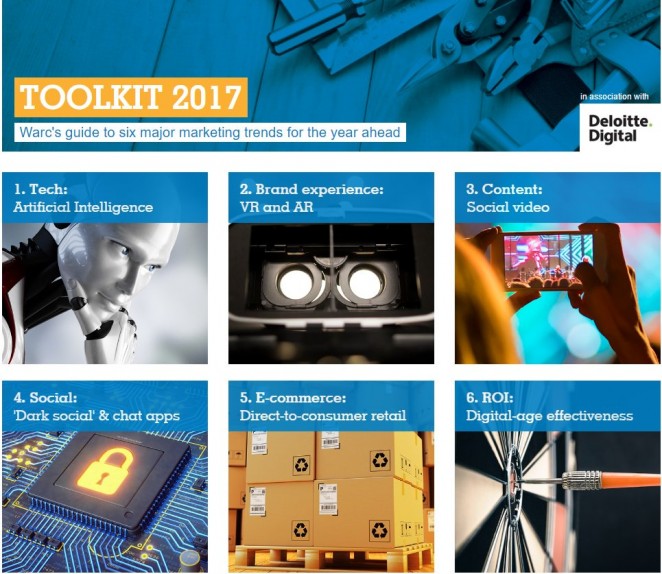 The value of VR and AR is predicted to hit $150 billionn by 2020. As VR and AR grow hand-in-hand to create mixed-reality experiences for consumers by creating immersive personalised content, key insights identified where VR and AR are expected to impact the marketing industry in 2017 are: