Michael Craig-Martin exhibition traces the evolution of the gadget

Since hitting my mid-twenties and discovering the joys of an (albeit limited) disposable income, I've become something of a gadget fiend. Yes readers, I'm one of those insufferable pricks who just has to have the latest gizmo or pointless upgrade, logic be damned. As such, my home office resembles a futuristic Pee-Wee's Playhouse, my garage is so stuffed full of discarded tech that putting the bins out on a Monday morning feels like running the gauntlet, and I have at least 12 devices hooked up to the gigantic television in my living room. The reason being? I just can't bring myself to throw them away.

It's not like I couldn't sell them (though I will admit to loathing eBay with the burning passion of a thousand dying suns), and I'm not deluded enough to think these outdated gadgets have feelings (though my old original iPod is so badly stained it looks like it has a face), it's just that I genuinely admire the design, the technology and the effort that goes into every device. From laptops and games consoles to tamagotchis and cassette decks (yup, still got one hooked up to the stereo), there's an elegant beauty to the best electronics that (in my eyes at least) elevates them beyond mere appliances and into the realms of art. 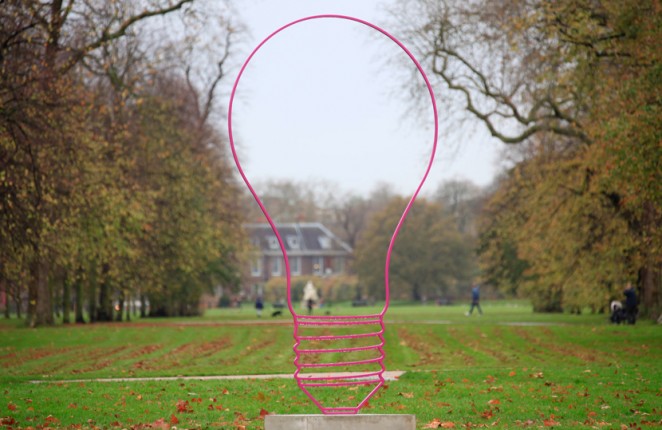 Steve Jobs agreed with me, and so does th artist Michael Craig-Martin, who is devoting his first solo show in 26 years to the beauty of the gadget. The “Transience” exhibition presents graphic depictions of three decades of electronic goods, bringing together works created by the 74-year-old artist over the past 30 years, and documents he development of technology from the light bulb and battery to the modern Macbook. Now-defunct items such as the cassette tape and the black-and-white television are shown alongside images of more recent technologies such as an Xbox controller and an original iPhone.

Each of the objects is portrayed through minimal line drawings, filled with bright contrasting colours. An incandescent light bulb, for example, is shown in red, green and blue on a pink background, while a side view of a wireless computer mouse is depicted in pastel green and pink. It's sparse, but aesthetically pleasing stuff, much like the gadgets the images are portraying. Two of the Serpentine's galleries have been painted green and pink, to echo the colours of Craig-Martin's work, and another room is covered in an overlapping wallpaper design created for the exhibition. A sculpture featuring an oversized pink outline of a light bulb has also been designed for the Serpentine, and is on display outside the gallery. 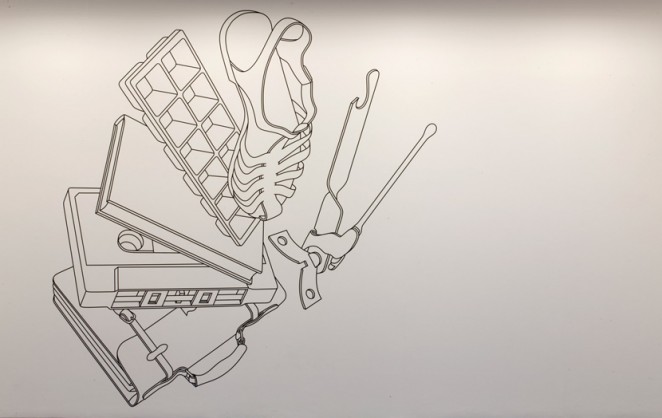 Craig-Martin said of the exhibition, which opened on November 25 and continues until February 14 at the Serpentine Gallery in London's Kensington Gardens: When I started drawing these ordinary, everyday objects in the 1970s, I thought they were pretty stable in the world. I assumed they would not change over time. I realise now that the things I was drawing were objects that had been designed or invented in the period dominated by the principle of form follows function. Today this is much less true. One of the things that struck us was the transformation from the analogue age to the digital age, which of course I've recorded, because I have kept drawing the things around me. While in the pre-technological age I occasionally represented a black-and-white portable television or a tape cassette, with the recent work there is a sudden acceleration and there are 15 or 20 paintings of technological objects.”

Gallery director and co-director Julia Peyton-Jones and Hans Ulrich-Obrist, added: “Michael Craig-Martin and his acute observations present an extraordinary picture of recent developments in the production, processes, functions and form of the objects that populate our world. His work reveals a search for the ultimate expression of contemporaneity in a way that we all experience, through the items we use every day.” I couldn't have put it better myself, and will definitely be checking out the exhibition next time I'm down in London. If you've even a passing interest in the understated beauty of electronics, I implore you to do likewise.