Thoughts on the immediate future of AI and robotics, and our role within it, appear to be something of a running theme for me this week. I have already commented on Elon Musk and his thoughts on how human beings must become cyborgs in order to remain relevant, and now, my gaze is drawn to a rather fascinating exhibition in Germany, which poses a number of equally deep questions regarding our relationship with 'the machine' and whether or not we could or should trust the technology that could end up replacing us. 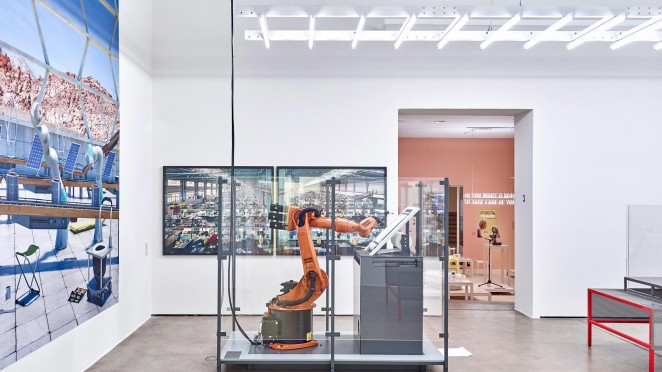 The “Hello, Robot” exhibition (the first at the Vitra Design Museum to focus specifically on robotics) explores the relationship between humans and the intelligent machines that increasingly feature in our lives. It asks a number of powerful questions such as; “Do you trust robots?,” “Could a robot do your job?” and “Do you believe in the death and rebirth of things?” But it appears to do so in an entertaining and approachable way. Frankly, I really want to go. The 200-plus exhibits include R2D2, an automatic manifesto generator, a smart sofa and a robot-made pavilion. The exhibits are framed by 14 questions that aim to make visitors think beyond the current conversation around robots. 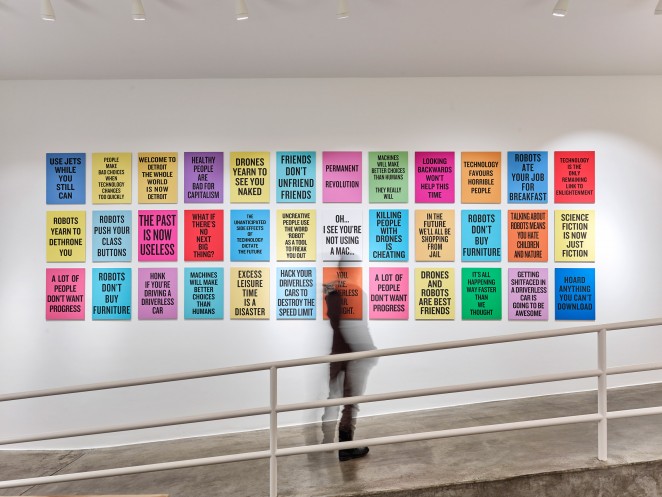 Exhibition curator Amelie Klein, explains: “The exhibition looks at how we interact and relate to this new species, the robot. What we're doing here is a journey. On this journey the visitor finds 14 questions, and these questions are really meant to invite dialogue and the reflection on how we want to deal with this new technology – as individuals but also as a society.” 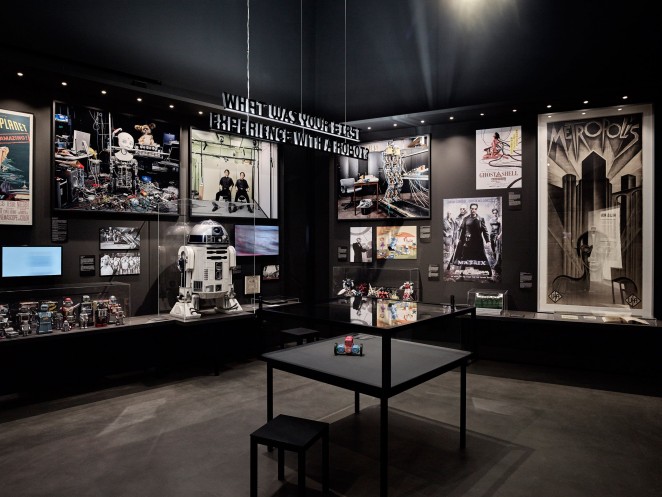 The questions, posed on overhead signs, guide visitors through the various rooms of the exhibition. The first room of the exhibition begins on a lighter note. It' filled with representations of robots from popular culture and asks simply, “Have you ever met a robot?” Exhibits in this room include Star Wars' lovable droid, a Gundam suit from the Japanese mech franchise, Nintendo's 80s-era Robotic Operating Buddy (if anyone ever used one of these things 'back in the day' you'll know just how frustrating they were) and an installation specially commissioned from ECAL students. An adjoining room, meanwhile, contains a Pokédrone, the drone that lets users play Pokémon Go from their couches, and a Blabdroid, a cute cardboard robot that records people sharing their secrets. 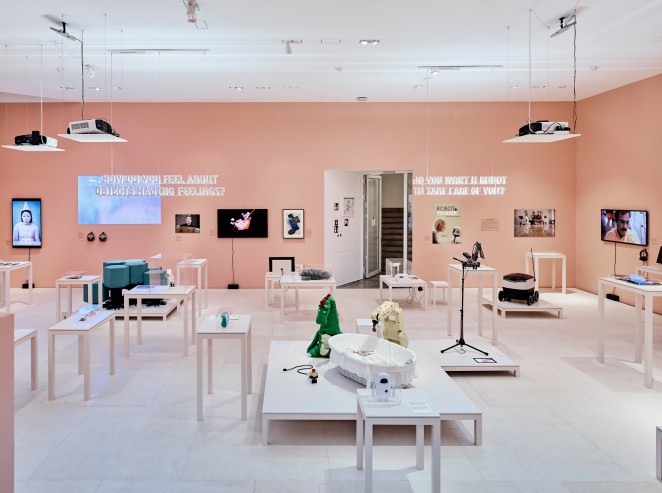 Trust and care between robots and humans comes to the fore in the room asking “Do you want a robot to take care of you?” and “How do you feel about objects having feelings?” This room includes Paro, the fluffy robot seal that is used in therapy, and Carlo Ratti's Internet of Things sofa, which can be modified with an app or hand gestures. It also explores the oddly sombre new funeral ceremonies that have arisen for the already obsolete Sony robot dog, Aibo. 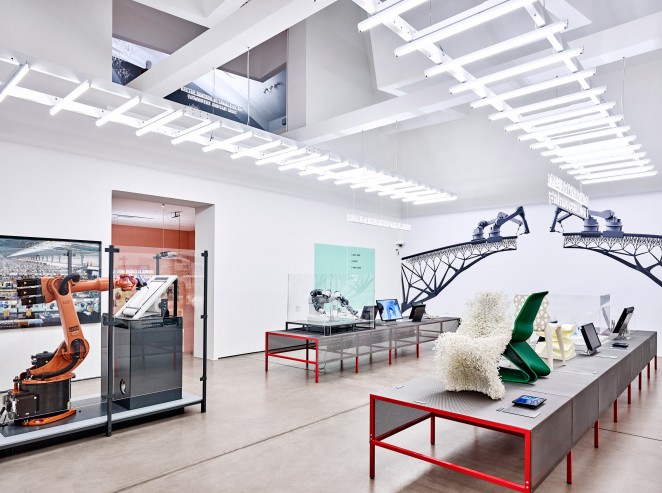 Another room in the exhibition, which asks “Could a robot do your job?,” looks at robotic construction, 3D printing and other industrial applications of robotics. This room includes the manifesto-writing robot arm Manifest and MX3D's 3D-printed bridge. The theme continues outside, where the University of Stuttgart's robot-made and extraordinarily lightweight Elytra Filament pavilion has been erected. The final room looks at the merging of humans and machines, asking “Do you want to become better than nature intended?” and “Would you live in a robot?” The questions posed are admittedly far too complex and open to interpretation to be fully explored by an exhibition that strives to be as entertaining as it is thought-provoking, but the very fact that such questions are being asked at-all is encouraging. 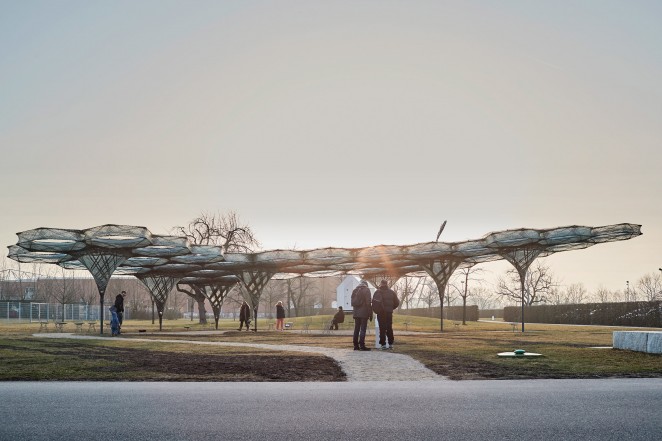 Perhaps one of the most interesting topics explored by the exhibition is the role design plays in modern robotics, and how those designs affect how we relate to these machines. Klein adds: “The role of design in robotics is to protect human values. The difference between well-meant care, patronising, control and spying are very fluid. This is really where design comes into the discussion because it's a political and design decision whether you design an object in a way that streams everything online into the cloud without you deciding as a human, or whether you make this transparent and allow the user to stream whatever he wants to be streamed. I think it's extremely important for people to realise that what we speak about when we speak about design in the 21st century is interaction and relationships.” 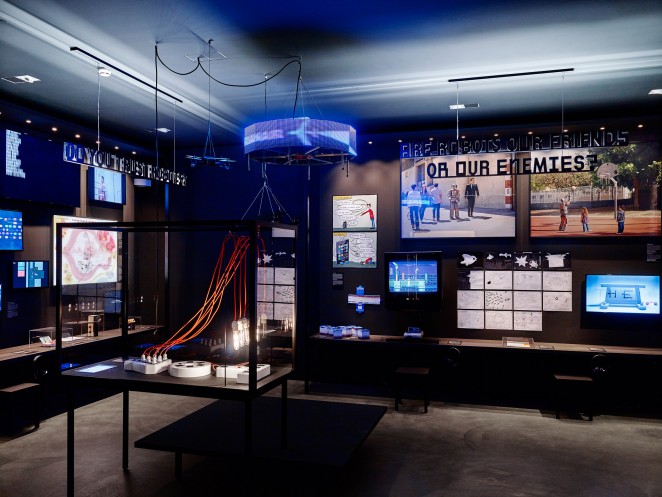 The Hello, Robot exhibition is on at the Vitra Design Museum in Weil am Rhein until 14 May 2017. The museum is part of the Vitra Campus, where the brand's production facilities sit among buildings like Zaha Hadid's Fire Station and Herzog & de Meuron's stacked VitraHaus. Hello, Robot will later embark on a tour, including to the MAK in Vienna and Design Museum Gent, which are presenting partners. The exhibition is accompanied by a book that has, true to form, actually been laid out by an algorithm. I doubt I'll get to visit the exhibition before May, but the book is definitely on my wish list!