The Coalition for Gun Control has released a new app highlighting how increasing gun violence has had an impact on Toronto, the fourth largest city in North America.

Dodge the Bullet, created by local agency Zulu Alpha Kilo, uses geo-location technology to show how many metres away Toronto residents were from an actual shooting. 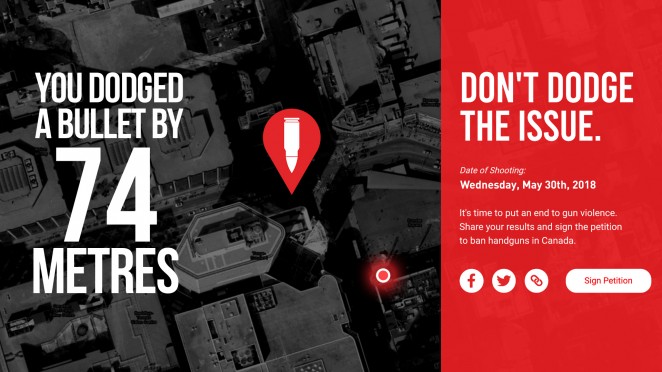 The project taps into the Toronto Police Services’ API of shootings and homicide data to create an interactive map showing every user how close they are, or have been, to a past incident.

The campaign’s goal is to turn that data into a digital experience that creates a personal connection between every Torontonian and the rise in gun violence in their city, which has significantly increased in the past year. 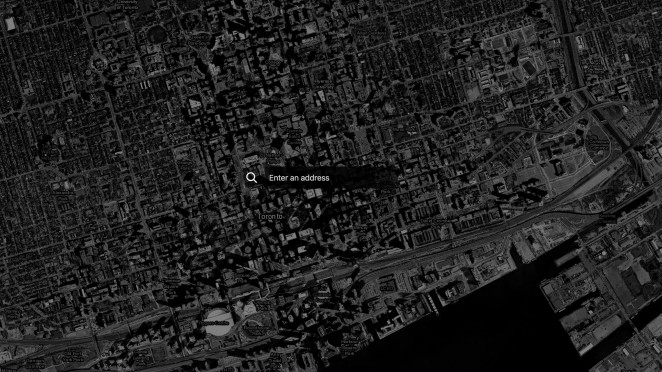 The experience explains to users that even though they ‘dodged a bullet’ so to speak, they shouldn’t ignore the issue of gun control in Canada. The web app also directs them to sign the Coalition’s most recent petition on the House of Commons website.

The work is the most recent activation in the Trigger Change campaign, an effort by the Coalition for Gun Control to pass a national handgun and military assault-style weapon ban. 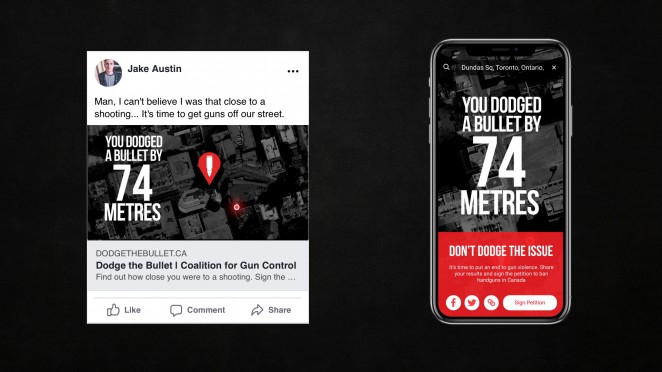 The first phase of the campaign launched in November of 2018 with the delivery of a 13-foot bullet sculpture to Toronto City Hall. It resulted in over 22,000 petition signatures in support of a national ban on handguns and military-style assault weapons, more than any other Canadian petition in support of gun control.

As the Coalition continues building Trigger Change into a long-term grassroots movement, the Dodge the Bullet technology and web app will be available for use globally by other major cities worldwide.