Whilst the 2014 “Apple Event” has been rumoured for a while now, the bombshell was finally dropped yesterday when the tech giants sent out invites for an event on the 9th of September with the tagline, “Wish we could say more.” The event is widely expected to herald the launch of the iPhone 6, as well as a larger iPhone (rumoured to be called the “iPhone 6L”) and an iWatch, which would be competing directly with recent smartwatches unveiled by Samsung and LG (more on that later). The event will be taking place at the Flint Centre for the Performing Arts at De Anza College in Apple's Cupertino, California home (the same location Steve jobs announced the first Mac 30 years ago) at 10AM, and will almost certainly be streaming over Safari, Apple TV, and through iOS devices, as with past Apple conferences. 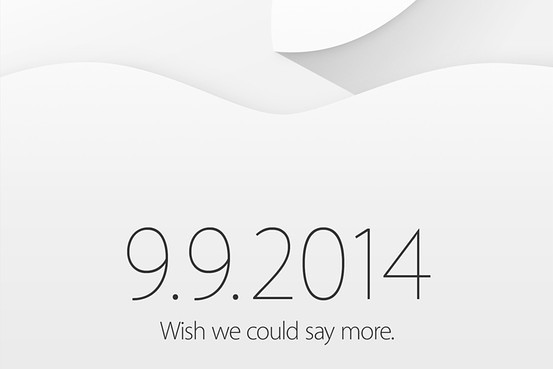 Apple's invitation to the event on the 9th of September

Apple are maintaining their usual cloak of secrecy, with a minimalist invitation that teases just a hint of the famous Apple logo. The event is notable as there were very few significant announcements made at the Worldwide Developers Conference keynote three months ago, with just and OS X and iOS update announced, which will include new features such as HomeKit and HealthKit, Apple's first steps into “Smart House” automation and personal health management respectively. The company's chief executive, Tim Cook, has said that Apple would be breaking into a new product category this year, the first since the iPad was introduced 4 years ago. Many technology experts have pontificated that Apple might be branching out into the realms of the Smart TV, but with that market largely stalled and the smartwatch market on the rise, this seems unlikely now.

Apple's chief executive, Tim Cook, has said that Apple would be breaking into a new product category this year, the first since the iPad was introduced 4 years ago

Speaking of the smartwatch market, LG and Samsung, perhaps Apple's largest competitors, both just recently unveiled their next smartwatches, the LG G Watch R, and the Samsung Gear S. This would be surprising, as the LG G and Samsung Gear Live watches have only just launched, but the announcements have probably been brought ahead in order to compete with the iWatch announcement Apple are expected to make in 11 days time.

The LG Watch R utilises Google's “Android Wear” operating system, which has been designed from the ground up to be run effectively on smartwatches. The square design of the first “G” watch, however, is to be replaced with a far more conventional round shape, which mimics the design of a conventional sports watch, much like the Motorola Moto 360. The watch features a 1.3 inch plastic OLED display (which the company claims is viewable even under bright sunlight) with a surprisingly nippy 1.2gHz Snapdragon 400 processor, 512MB of RAM, 4GB of storage and a 410mAh battery. The Samsung Gear S, meanwhile, takes a more 'mini tablet' like approach, with a curved 2 inch screen. It runs a 1gHz dual core processor, 512 of RAM and 4GB of storage. It will be running Samsung's own Tizen OS and includes a heart-rate scanner and a UV sensor. Perhaps the most notable feature, however, is that it's both dust and waterproof. The LG watch will launch by the end of the year and the Samsung watch will be in stores by October. Prices have yet to be announced (they're both probably waiting for Apple to make the first move).

Benjamin Hiorns is a freelance writer and musician from the UK who finds the idea of a watch that's more powerful than the last desktop computer he bought frankly terrifying.