Something extraordinary has happened...

Something extraordinary has happened to me. Not a new brand of tea bag I rather like, but something properly extraordinary.

As you'll know, almost a week ago, armed men stormed the offices of the French magazine Charlie Hebdo; shooting and killing staff members attending an editorial meeting. They then went on the run, taking hostages. Further hostages were seized by accomplices, and some of those hostages died too.

"In a show of solidarity, people started using the phrase 'Je Suis Charlie'."

For any decent human being, this was an outrage. But for those who do creative things for a living, the shock and revulsion was particularly keenly felt. Those who were shot in that meeting, died while doing their job. Because they were doing their job. Unthinkably dreadful, but also terribly real.

Almost immediately, people across the world took to social media - particularly Twitter - to express their dismay and horror. In a show of solidarity with the magazine and its staff, they started using the phrase and hashtag 'Je Suis Charlie'. I did the same. There was only one difference between my tweet and tens of thousands of others. I wrote the phrase  above an image of cartoon character Charlie Brown, crying on a bench. 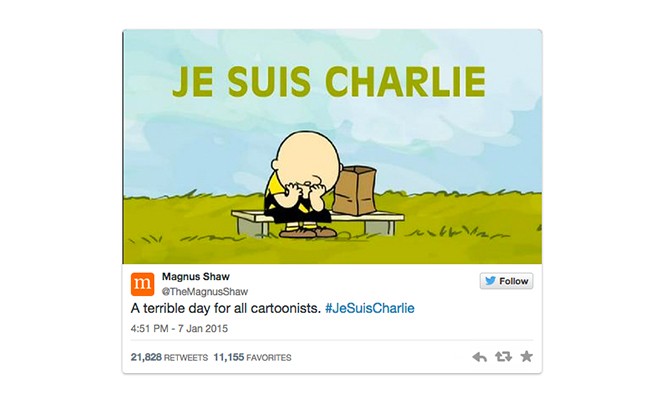 I didn't draw the image. It was a vintage illustration by Charlie Brown's creator: Charles M Schulz. Nor did I write the line 'Je Suis Charlie' - that was inspired by the film 'Spartacus' and was already appearing on line when I published my piece. All I did was combine one with the other. And place it on Twitter.

What happened next was the extraordinary bit. Optimistically, I thought one or two of the folk who follow me on social media might like the 'cartoon' and share it. In fact, 21000 people worldwide shared it. That's an approximation as it is still being shared, and many users took it away from Twitter and presented it elsewhere. It's reasonable to suppose that figure is actually rather conservative.

Since Wednesday afternoon, when the image was published, it has been shown on CNN, Newsnight, USA Today and ABC. It has appeared in The Independent, The Daily Mail and The International Business Times. It was used at a conference of the German Green Party and has been transferred to t-shirts by marchers in Paris. I have been interviewed several times about the picture, and yesterday it was added to the permanent archive of the NEWSEUM in Washington DC.

By most measures, this is the most successful creative endeavour in which I have ever been involved. For someone who writes for a living, that's more than a little bemusing.

Although it sounds like it, this isn't all about me. When those men died in their Parisian meeting room, I was safe in my office in Derbyshire. I wasn't hurt, threatened or bereaved. So, if my 'cartoon' achieved anything, I hope it focused the minds of those who saw it and encouraged them to consider the injustice and the loss in France that day. The image was an expression of my feelings, but it's important it is never seen as an advertisement for me.

Above all, the simple fact that I was able to create a message and publish it - without fear of retribution, harm, censure or reprisal, is exactly the point of the picture. The freedom to express ourselves, however controversial our views might be, is an essential component of a civilized, progressive and mature society. As last week's madness demonstrated, we must resist any attempt to remove that right with unwavering determination and ceaseless vigilance.

Good lord! I saw that image on TV too! Great thinking there, Magnus.

Amazing Magnus! There's an Art Director in you yet ;-)

By the way Magnus. Did this increase your followers on Twitter?

Hi Mike. Yes - by a factor of about six.