When I was young, the most advanced hand-held computer game on offer was probably Space Invaders. A massive, chunky black device about the size of a hardback novel, requiring six AA batteries and with a dodgy red display which made it virtually impossible to play in daylight. So most of my toys weren’t electronic at all. I remember Micronauts very fondly, but one of my firm favourite toys of choice was Lego.

At that age, though, I think the most exotic thing I ever built was a house – and even that was basically a square block with some sort of an unsymmetrical roof with a dodgy-looking chimney stack. To be fair, the range or Lego accessories 35 years ago was somewhat limited; there certainly wasn’t the massive range of themed extras that there is today.

One of the biggest ranges is based around Star Wars, which allows for quite a massive spectrum of options. As it happens, a few years ago I was one of the ushers for a friend’s wedding, and he rewarded us all with various Lego Star Wars figures. Mine was Anakin Skywalker morphing into Darth Vader. Love it!

But recently, Lego have really pushed out their blockular comfort zone by unveiling their biggest model ever. Tying in with the launch of The Yoda Chronicles on the Cartoon Network, a life-size replica of the X-Wing fighter from Star Wars landed in New York’s Times Square, having made the journey via a secret location in Long Island, via the Czech Republic where it was built.

It’s truly a sight to behold – for both Lego fans and Star Wars fans alike. Built entirely from the same Lego blocks that you and I used to play with, the statistics alone are enough to amaze. It stands a mighty 11 feet in height, and spans a colossal 43 feet in length by 44 feet wide. And it weighs well over 20 tons (45,979lbs, to be exact).

It’s so huge, in fact, that it requires an internal steel truss frame to support it, and needed forklift trucks to slot everything into place.

An incredible feat of design, it was two years in the planning, and four months in the making, in Kladno, Czech Republic. Again, the figures involved in the construction are baffling: 5,355,200 individual Lego blocks were laid by a 32-strong team, and the construction alone took 17,000 hours.

Once constructed, it was then deconstructed into 32 segments before being shipped to Long Island, New York. 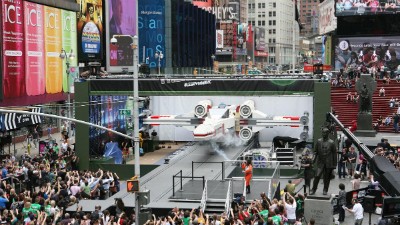 Lego master builder, Erik Varszegi, says that the design itself was relatively easy, because they essentially just recreated their original toy model on a scale 42 times larger than the original. But the real feat was actually in the engineering of the steel truss frame which holds it all together. It’s built to withstand movement, so the rumble of the underground system won’t cause any problems, nor will its move in a few weeks’ time to Legoland in California, where it will stay for the rest of the year.

Below is a high-speed video which shows the construction of the X-Wing Fighter from origin to finished product. It’s an amazing sight:

Connect with me on LinkedIn