Tons of emails find their way into our inbox – as it is true in most cases. Amongst all this noise, it is just natural that one or two things may not be exactly relevant for all our needs. And no, we're not just talking about spammy international accounts trying to sell you the trick to satisfy all your lover's needs.

It is also equally natural that one or two things may struck an open nerve. When we talked about the support for UK freelancers offered by the government, you were fast to let us know that small, limited companies had been completely overlooked, a staggering truth that echoes in the findings of our Coronavirus Report as well.

Then, just a few days ago, the unexpected: an email from freelance producer Matt Keen, an appeal asking for support for all the "Ltd" companies out there. The hashtag #WeAreLtd was born three weeks ago and it collected thousands of interactions and views since then, urging the government to listen and envision some kind of support for all those freelancers and limited companies in trouble.

With the lockdown set to continue for an indefinite time, some freelancers don't even know when they will start working again, and we know that some of you are trying to run their own limited company by themselves.

With the release of a small film to mark the start of the next phase of the campaign, we've reached out to Matt asking him to send us a few lines to promote his initiative. Without further ado, we would like to leave you to them below. 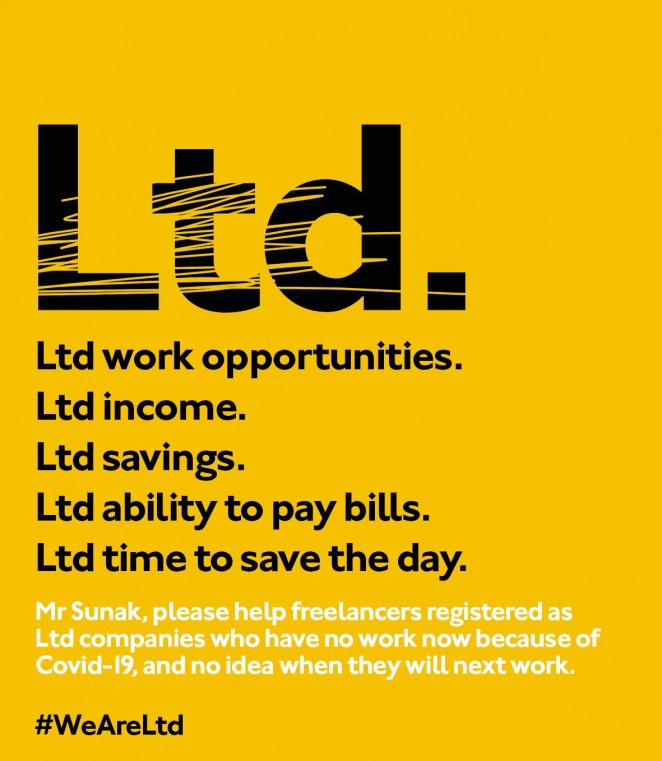 This all happened so fast. Frighteningly fast.

I was about to meet a friend but he said he was going to choir practice instead.  Meanwhile my wife explained she was going to a friend’s for dinner. I’d heard the news and was worried. Being the cautious type, I explained that I thought this was potentially a very serious situation, which needed to be taken seriously.

We’ve all been trying to find our feet this past couple of months. I’m trying to teach a 5 year old from home four days a week, while my wife works harder than ever for The Early Years Alliance. Part of their remit is to work with domestic abuse cases, which sadly have gone through the roof.

I’ve been a Freelance Ad Agency producer for 16 years now, working at over 30 agencies. I’d love a permanent role but that’s another story. I’ve been trying to maintain a sense of normality by keeping in touch with Ad industry news through sites like Linkedin and Creativepool. It’s nice to think that we may return to normality at some point, and I want to be well positioned and informed about the state of play when we come through this. 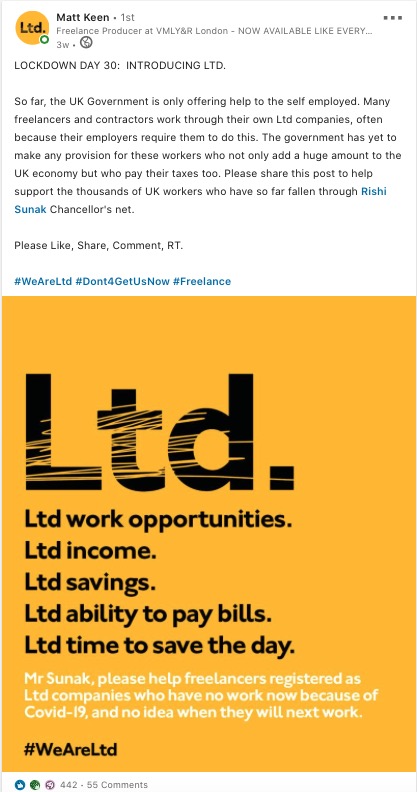 I envy full time staff that have been furloughed at 80% of their salary. I’m self employed but also registered as a Limited company, at the advice of my accountant some years ago. There has been much discussion of this on Linkedin and it appears that some people like me have slipped though the government’s safety net.

I saw a post by legendary copywriter Chas Bayfield that got me thinking about the concept of being ‘Limited’. Chas and I got in touch (remotely, of course) and came up with an ad for those in our situation: #WeAreLtd, beautifully designed by Martin Casson. Chas wrote some copy and we put it up on Linkedin. The post has been viewed 17,000 times. For comparison, government statistics estimate that there are 19,000 self-employed people currently working in advertising. We’ve moved to the next stage of the campaign and released a film that you can see here.

Both Chas and I have been in contact with our accountants (big firms, not a bloke above a chip shop) within the last few days and even they are unsure of what help is available to those in our position. If they don’t know, what hope do we have as creatives and producers, plumbers and photographers?

What I do know is that one year I remember paying more tax than Facebook. With seemingly no end in sight to this crisis (and no way of knowing when we’ll next find work when we’re allowed to) is it too much to ask to get some clear information and a little financial help from Rishi Sunak now, however ‘Limited’?

We are 4.5million people.

Matt Keen is a Freelance Producer at VMLY&R London, now available to work like most others.

Matt Keen May 13th, in the evening

LM Productions Ltd May 18th, in the afternoon

Hi Matt, i hope you get some traction and this goes somewhere a lot of people have fallen through the net even through they have paid tax and only taken professional advice from advisers like accountants good luck to you and Chas on this and i like you have no idea when we will be able to restart but i am sure we will be at the end of the cue. Regards Stephen

Matt Keen May 21st, at noon

Thanks so much for the coverage.

The Freelancer Grind: Managing your finances

Okay, so this is a tough one for most people to be honest, but as a freelancer, this is very important. You don’t know when your next paycheque is coming in and have to do your own accounts. When you set up as a freelancer, you have three...

Networking is separate to finding clients because it’s not really about getting work, but meeting people. I know personally how hard this can be, being an awkward dude with a shit ton of anxiety. Talking to strangers is tough, but you’ll...