The 2016 US general election has been an almighty farce, let's not pull any punches here. Farce makes for great fuel when it comes to creative work though. Running the range from the daft to the strikingly satirical and the just downright bemusing, the last few months have seen a barrage of creative executions from designers, advertisers and social media influencers alike flooding the internet, and here, on the eve of what promises to be the closest and most horrifyingly fascinating election in recent history, I've collected a few of my favourites. Whether you're rooting for Trump or Clinton (and we all know that, on whatever side of the fence you stand, it's a lesser of two evils game this time around anyway), there should be something here to give you a warm chuckle, pause for thought, or perhaps a little of both.

The Trump Bot by SS+K

Donald Trump’s positions change so often that the simple task of asking; “Did he really just say that?” can be genuinely exhausting. So, SS+K and messaging bot platform Dexter brought The Donald's most hurtful, damaging, and hate-filled messages into one place with BFF Trump; the only Facebook Messenger bot that offers a virtual one-on-one conversation with the biggest and loudest mouth in the US of A. The reasoning behind the platform was that, whilst Trump is everywhere right now, his words aren’t making it through to younger voters who could drive this November's presidential election, and who would likely be horrified by what he says. But the top news source for millennials is Facebook, and they’re spending more time in messaging apps than anywhere else, online or offline. Facebook's engagement algorithms can skew the kinds of content millennials are receiving, so the real Trump, is largely absent from the news feeds of the politically disengaged masses. The answer, SS+K realised, was to bring actual Trump quotes to Facebook Messenger. 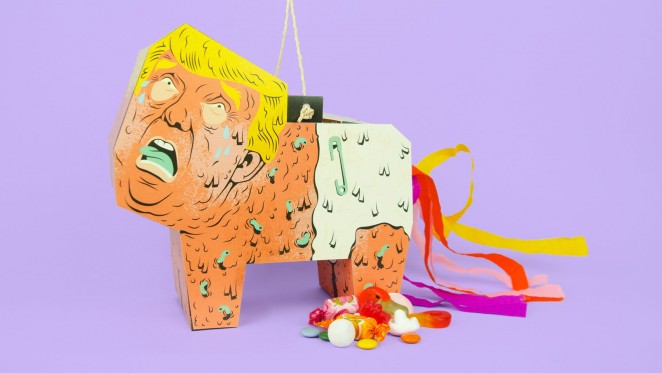 Responding to Trump's comments about Mexicans, Swedish designer Caty Aguilera produced a terrifying Donald Trump piñata, so any offended parties can take out their frustrations. The paper piñata, illustrated to look like Trump dressed in a nappy, is folded from five pieces and suspended from the ceiling so people can beat it to kingdom come. Aguilera (no relation), said: “Astonished and appalled about so many things, the racism, the ignorance (and the fact that people would support Donald Trump as an actual president) made me want to counter act. I wanted to come up with a designed based response to what I was hearing and feeling.”

Wieden+Kennedy recently opened a food truck in their native Portland ostensibly selling “Donald Trump's BS.” A little on-the-nose maybe, but at least the food items were genuine! The truck was parked in Pioneer Courthouse Square with a menu printed on gold-coloured paper revealing items like “Middle-Class Hero,” the “America-First Hero,” “Border-Security Hero” and “Tell-It-Like-It-Is.” All of the these items came with wrappers which debunked various famous Trump statements. Each of the menu offerings were a different take on the same basic food: a baloney sandwich, which the agency gave away for free as part of the stunt. 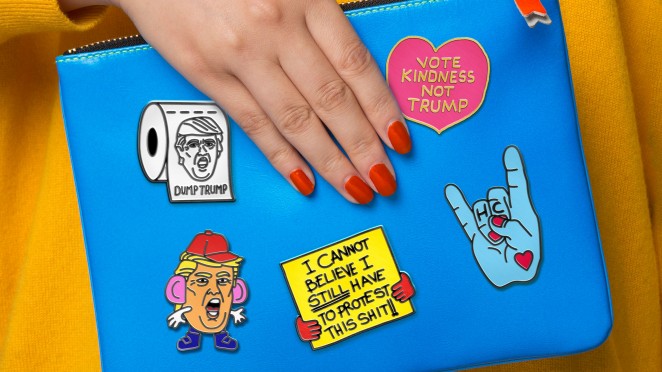 New York design studio Sagmeister & Walsh created 40 pins that protest Trump and encourage young voters to support his opponent. The tongue-in-cheek graphics (which have also been transferred onto T-shirts, posters and stickers) depict Trump as a clown, a baby, a poo and more. The studio said: “We can't let a racist, misogynistic, homophobic man become president of the United States. We want everyone to be able to wear their heart (and politics) on their sleeves (or bags and jackets), so merchandise will be priced low.”

Illustrator Mr Bingo and designer Freddy Taylor teamed up to create the Trump Cushion; a whoopee cushion emblazoned with Donald Trump’s face that can be inflated so that it’s full of hot air, just like the Republican presidential candidate himself! It’s a charity project, with all proceeds from the sale going to “Causes that stand to be affected should Donald become the next leader of the free world,” according to Bingo and Taylor. Once you’ve paid your £5 you’ll receive a Trump Cushion by post and then you just have to follow five easy steps: remove Trump; inflate Trump; sit on Trump; and trump Trump. Simple. Elegant. Beautiful. 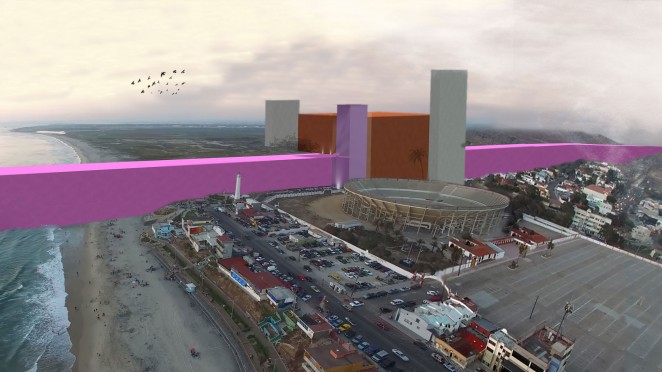 One of the most controversial proposals that real-estate mogul Trump put forward during his campaign was the intention to build a wall along the US-Mexico border, preventing illegal immigrants from entering the country. Mexican architecture firm Estudio 3.14 decided to visualise the gorgeous perversity of this idea, and created renderings of a bright pink barrier influenced by the work of legendary architect Luis Barragán. The studio said: “Because the wall has to be beautiful, it has been inspired in by Luis Barragán's pink walls that are emblematic of Mexico. It also takes advantage of the tradition in architecture of megalomaniac wall building.” 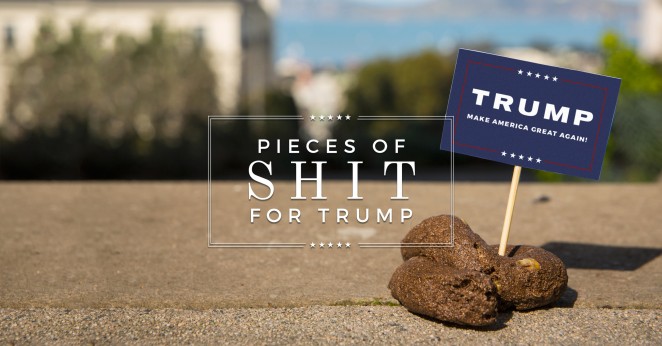 Pieces of Shit for Trump is less a website and more of an anti-campaign, which revolved around turning literal pieces of crap into supposed Donald Trump supporters. The site runners roped in barretSF to help them take a grassroots approach to helping these Trump 'fans' spread the love for the Republican presidential candidate during the primaries. @Shitfortrump, is an Instagram-based marketing campaign that plants campaign flags in piles of shit around various US cities and encourages voters to get their hands dirty as well. On the Shit for Trump website, fans can download tiny Trump campaign posters, affix a common toothpick, and transform any old (or fresh) piece of crap into a billboard that supports the controversial candidate. Taste that sarcasm! 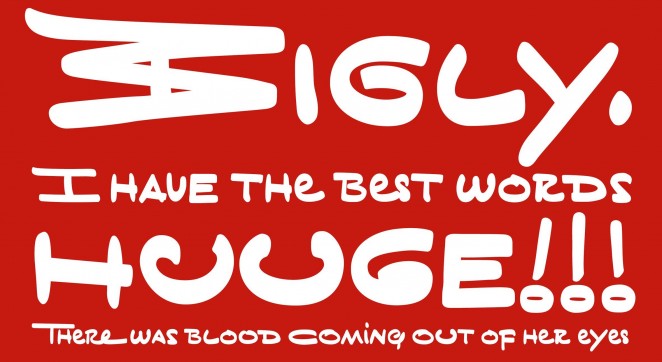 BuzzFeed designer Mark Davis made a freely available font version of US presidential candidate Donald Trump's handwriting. The Tiny Hand typeface recreates Trump's distinctive handwritten style, from the strangely angular Js to the dramatically curved Bs, Ds and Gs. Davis has designed several different versions of each letter, to recreate the haphazard nature of Trump's scrawl, including a particularly unusual spiky B. The design was originally created for a satirical piece, which purported to be pre-debate speech notes written by the candidate. Honestly, to me it looks kind of like a cross between the classic Disney font and comic sans. Make of that what you will.

The independent, Toronto-based agency Zulu Alpha Kilo found an unusual way to get attention stateside, sending an RFP (request for proposal) to the campaigns of both Hillary Clinton and Donald Trump to become either candidates agency of record (or both). Hot on the heels of its 2016 Ad Age Small Agency of the Year win, the agency's video (above), which also includes several spoof Clinton and Trump ads, marks the second appearance of the company's very unreal founder. He was first introduced for the agency's own website earlier this year. The character is played by veteran commercial and film actor Doug Murray, who recently featured in “Spotlight,” 2015's Oscar winner for Best Picture.

Finally, here are the final two campaign spots released by both parties in the run up to today's election. Both are noticeably bitter and cynical, relying on snippy asides and “But they're so much worse” rhetoric. Honestly, you've probably noticed that this article and all those preceding it (and the creative industries in general for that matter) have weighed heavily towards slating Trump, but then he's an easier target, as the lion's share of the accusatory spiel cast Clinton's way has been (quite frankly) almost completely unfounded tin hat nonsense. Either way, it's honestly all a little depressing that this is what the supposed 'greatest country on earth' has come to. But then, we voted for Brexit, so we can hardly throw stones with impunity now can we? 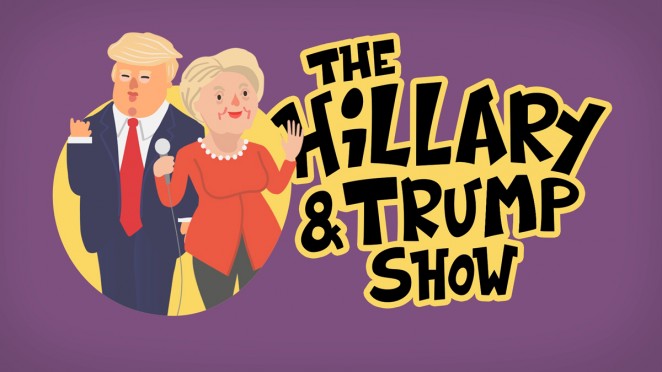 A surprisingly adorable comedic animated short from our friends at Jelly London, which casts the presidential candidates as old school, Warner Bros cartoon characters. Not much of a stretch really.

Two creative directors at Y&R NY have decided that nothing brings people together more than food. Y&R partnered with Dinosaur Bar-B-Que to design and develop a special Election Day menu and event. On November 8th, all 9 East Coast Dinosaur Bar-B-Qu locations will offer an Election Wing menu that features “Left Wings,” “Right Wings” and the “FuckIt Buckit” combo of both for the undecided. Because one thing everyone can agree on is tasty chicken wings. Right? 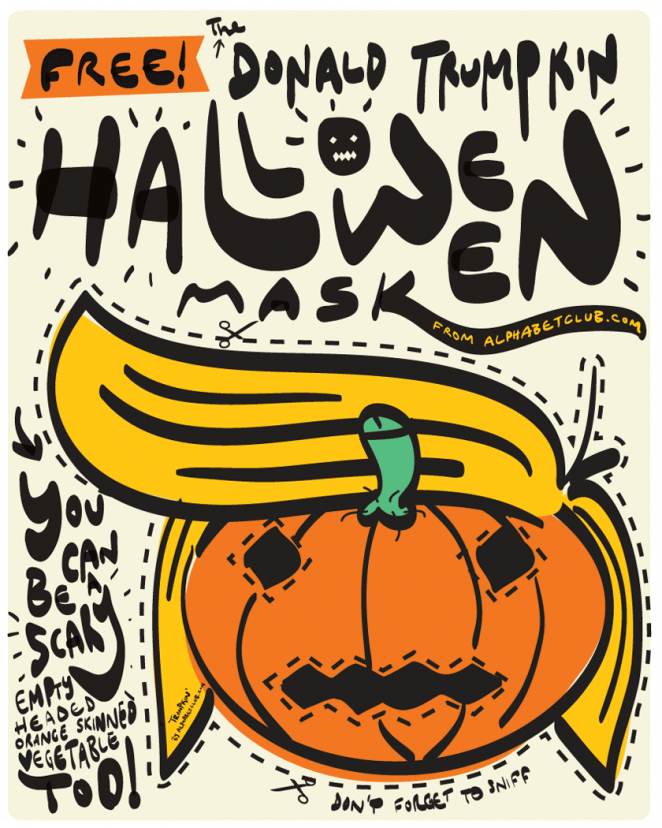 As pumpkin carving took hold this Halloween, Alphabet Club made a paper cut-out #trumpkin, providing all the satirical seasonal fun without the need for potato peelers, knives and spoons.

The IDM wunderkind promotes an upcoming festival performance by ripping into both candidates with his typically bizarre, acerbic wit. Or lack thereof. Either way. It's fucking Aphex Twin!

Benjamin Hiorns is a freelance writer and struggling musician from Kidderminster in the UK. If he had a vote, he'd vote Clinton, but he wouldn't be particularly happy about it.