AOL and MEC announce a new content deal for legendary tyre manufacturer Michelin. Called Car Connections, the digital content hub will use original videos, inspiring images and articles created by motoring icons and journalists to bring the world of cars and motorsport to enthusiasts. As its opener, the first film in the series goes backstage at the 2016 Le Mans 24 Hours with Keanu Reeves and Gard Hollinger, of Arch Motorcycle. Here, they meet legendary driver and Le Mans record race win holder Tom Kristensen, talk with race commentator Bruno Vanderstick and head to the garage of the truly inspirational Fred Sausset.

MEC and the Partner Studio by AOL team worked closely with Michelin to bring the new content hub to life. Running for six months, the campaign uses globally recognised talent along with bespoke content housed in a digital destination tailored to true motoring enthusiasts. Car Connections will live on MSN while also utilising AOL’s global video distribution platform to reach enthusiasts across thousands of relevant publishers in Michelin’s core target markets and drive traffic back to the hub.

Tom Hosking, Head of Partner Studio at AOL International, said: “With Car Connections, we’re able to use the experience and access that Michelin has to behind-the-scenes at some of the world’s leading events to give motoring enthusiasts video content and insights they might not get anywhere else.” Aurora David, European Account Director at MEC Global Solutions Paris, added: “Being passionate about cars is not a rational process. It’s a visceral feeling. It’s limitless and highly contagious. This is the idea behind Car Connections which we now proudly launches as a result of a partnership with Michelin and AOL, and our joined ability to bring together media, content and talent.”

Whether it be supercars, technology and design, prestigious or 'classic cars', motor racing or motorcycling, every person that loves the sights, sounds and smells of everything motoring will find content to fan the flame of their passion on the new Car Connections content hub. 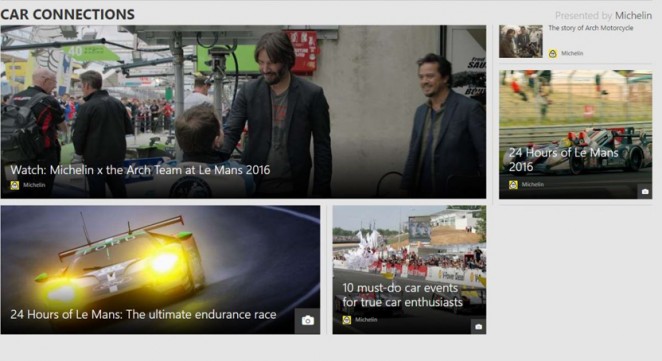