At this year’s festival, Somerset House, which is often seen as one of the main hubs of the event, exhibited a range of exciting design innovations. From tree-shaped furniture to a piano played by light and a virtual reality space pod, there was arguably something for everyone as the venue was brought to life with a vast array of eclectic and colourful creations. The London Design Festival exhibits were split between the main house and the West Wing, with the latter giving up 10 rooms to 10 different designers.

#PoweredByTweets - Besides ambitious installations from esteemed designers such as Max Lamb (which saw the furniture designer crafting rustic wooden furniture from a 187-year-old tree), Barber and Osgerby and Tino Schaedler (more on him later), there was also an exhibition literally powered by tweets. The #PoweredByTweets installation hooked up a typewriter to Twitter and had it scan the site's vast archive to search for words used in the classic “Alice in Wonderland” novel and use them to re-write it from scratch. It also included a colourful glass installation which dropped red liquid into a container every time someone tweeted about it, with these metaphorical “Blood droplets” forming part of a campaign to highlight the unjust law that bans gay men from becoming blood donors. The campaign titled #PutRedBack was headed up by Cheil London and Bureau de Change Architects. 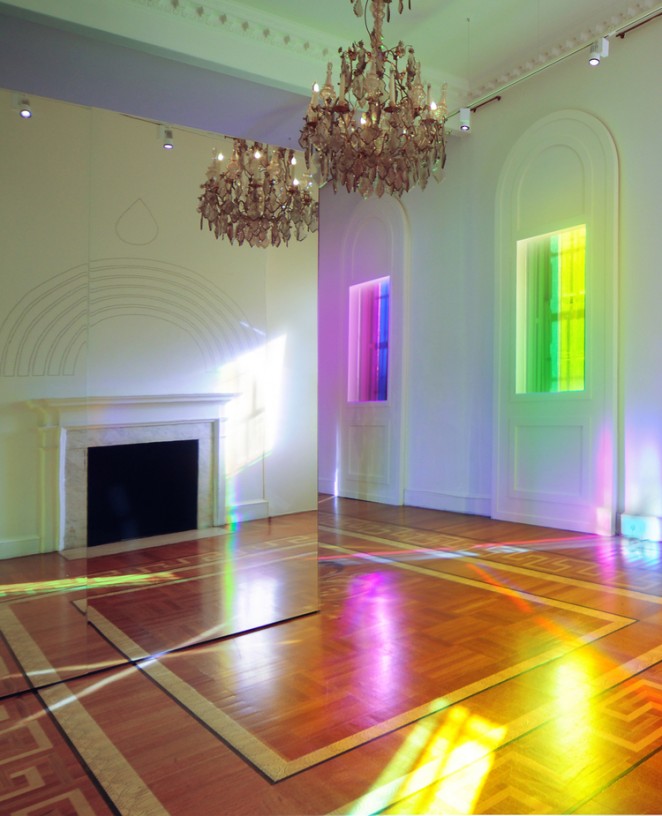 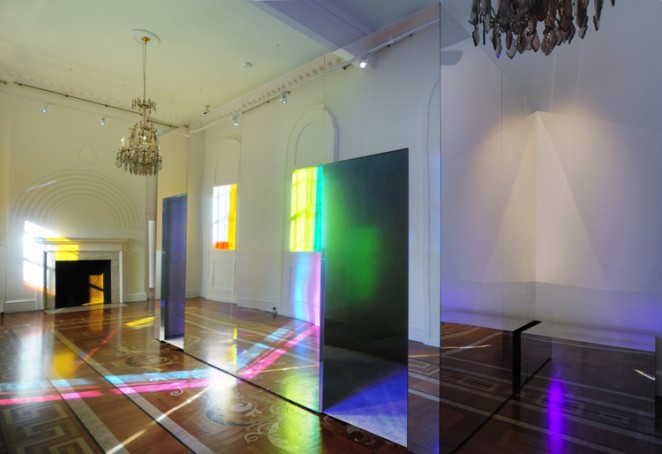 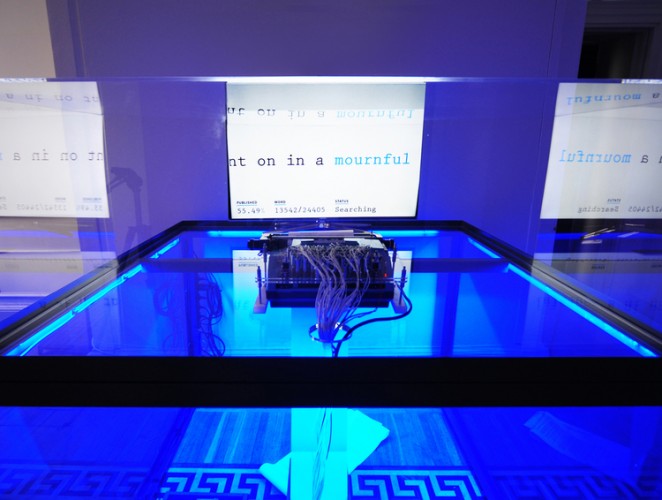 Alphabeta - The West Wing, meanwhile, was packed with design works such as the new MP 01 minimal mobile phone from Punkt and designer Jasper Morris, and the stunning Alphabeta installation created by the Assemble consultancy for Hem. The installation saw an electric self-playing piano hooked up to 44 lamps, with the low keys connected to dark-coloured lamps, and the high keys connected to bright-coloured lamps. A unique light display was created as the piano plays a song, with the effect built to show off a new range of lamps (hardly the most exciting piece of design news at the best of times) in perhaps the most elaborate (and interesting) way possible.

Connected by Pattern - Over in the West Wing, Patternity turned its monochrome graphics into a 3D installation, which the London studio described as a “Giant patterned playground.” The Connected by Pattern project started when Patternity created a limited-edition collection of stationery covered with black and white shapes for digital invitations company Paperless Post. The studio (founded by Anna Murray and Grace Winteringham) designed six black-and-white graphics for the Paperless Post's electronic invites, then used the same motifs to cover and fill an entire room. 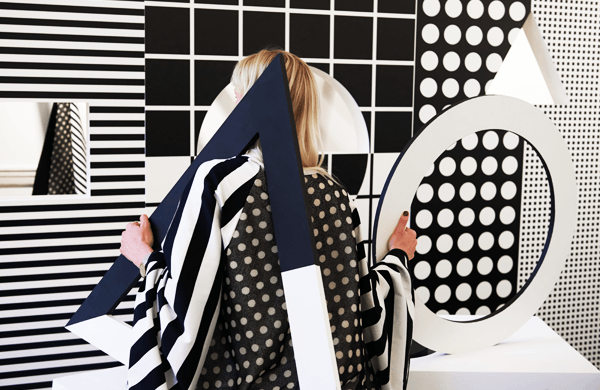 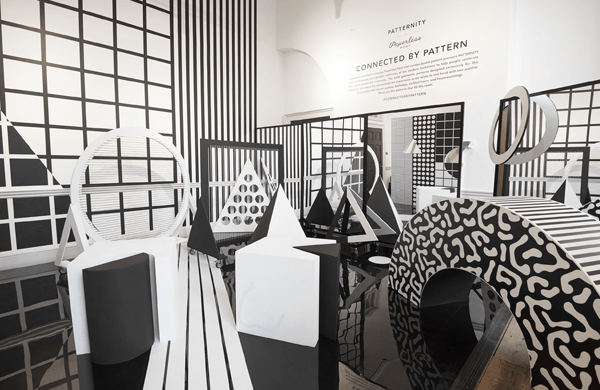 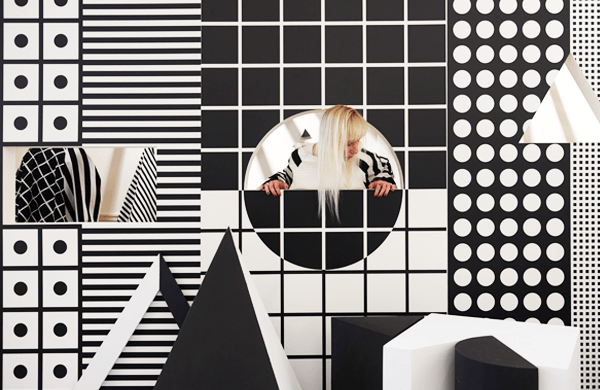 The Drawing Room - Also in the West Wing, London-based studio Toogood created an autobiographical “Drawing room” filled with furniture, clothing and personal objects. The Drawing Room was a collaboration between sisters Faye and Erica Toogood, which was designed around a phrase dating back to the 1670s that was typically used to define the quarters within a large house in which guests would be entertained. The phrase had a double meaning in the installation, however, where visitors were encouraged to sit down and relax in the space, which has been lined with tarpaulin sheets covered with charcoal drawings to evoke the feeling of a derelict country house. It was similar in design and execution to the siblings' Cloakroom installation at the V&A, a project that unites their practices of furniture and fashion design. 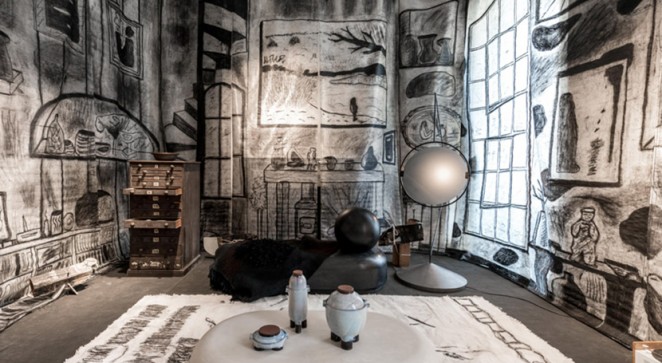 Odyssey - The real star of the show, however, was the afore-mentioned Tino Schaedler and his collaborative project with United Realities. “Odyssey” took the form of a space pod that looked it belonged in a Star Wars movie, with visitors asked to straddle the device and wear a modified version of the Oculus Rift virtual reality headset. The experience took riders on a tour of the cosmos, and whilst the pod remained stationary, the immersion of the VR was more than enough to cause a few upset stomachs and more than a few cries of wonder.

Moving away from Somerset House, the design duo Isabel + Helen exhibited a unique swing made from large geometric shapes as part of Chelsea 10, an alumni exhibition celebrating 10 years of Chelsea College of Arts, at the Rootstein Hopkins Parade Ground in Millbank. Comprised of two swings made from two different geometric shapes in bold colours, the playful installation was intended to reference the Constructivist art movement, and was a continuation of the designers' original Constructivist interactive playground, commissioned by the V&A museum. 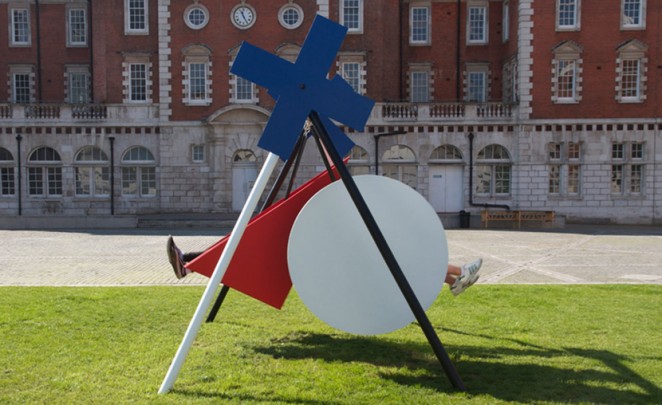 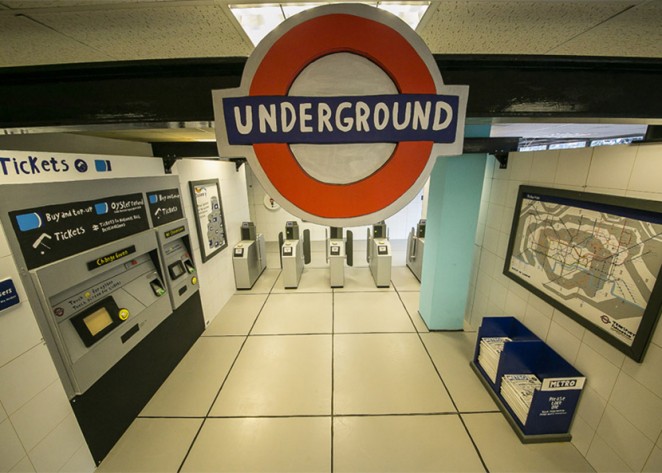 Camilla Barnard created a wooden and hand-painted replica of a London Underground station as part of this year's London Design Festival. Situated inside the former campus of art school Central St Martins, the sculptor and illustrator's ambitious project was created for this year's designjunction exhibition in London, which has moved into the former art school campus in Holborn, in the central area of the city. The set-like installation, created entirely from hand-illustrated sheets of timber, was designed over a period of three months at Barnard's studio in east London. The artist collaborated with woodworker Gunter Luck on the project, measuring the dimensions of barriers, ticket machines and tiles in London Underground stations to create accurate scale models for the installation. Barnard hand-painted Tube maps, Metro newspapers with spoof headlines and signage within the installation, which is sponsored by Dulux. Barnard carried around swatches from the paint brand for the duration of the design process to help match the colour of elements used in real stations. 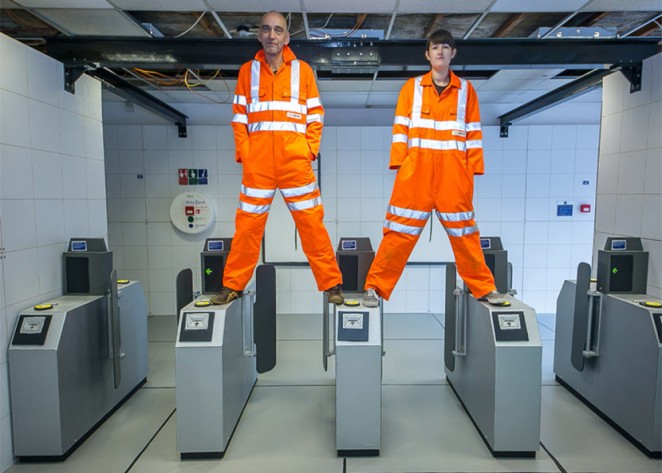 On one side of the installation, hand-written posters detailed the names of the designers included in an exhibition of products from Transport for London. Among the newly licensed Transport for London products were textiles by Michelle Mason for Swoon Editions, furniture by designjunction director Michael Sodeau and an updated version of the classic 1940s Coolicon lampshade by Trent Jennings. The installation marked the beginning of an 18-month programme of events, exhibitions and competitions celebrating London Underground's 150th birthday.

Designers including Neville Brody, Morag Myerscough and Malcolm Garrett have reinterpreted classic British road signs for an exhibition at the London Design Museum. More than 40 designers put their own spin on the iconic road signs, which were originally designed by Margaret Calvert and Jock Kinneir 50 years ago. The designs were launched in 1965 as part of the duo's task to create visual harmony across Britain's road system, which was described by the exhibition's curators Made North as “One of the most ambitious and effective information design projects.” Two new typefaces were also designed for use: Transport and Motorway. 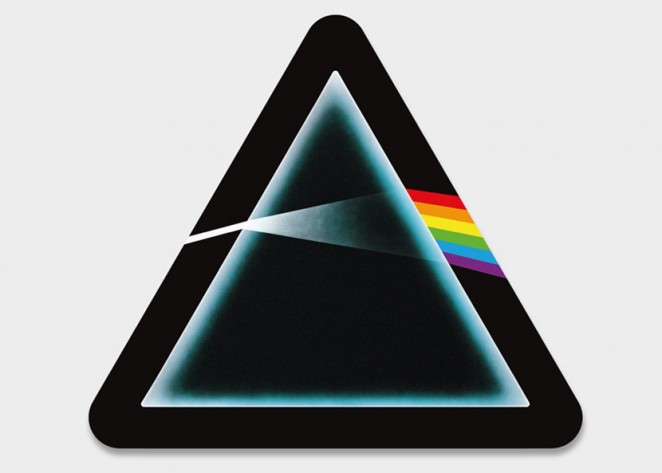 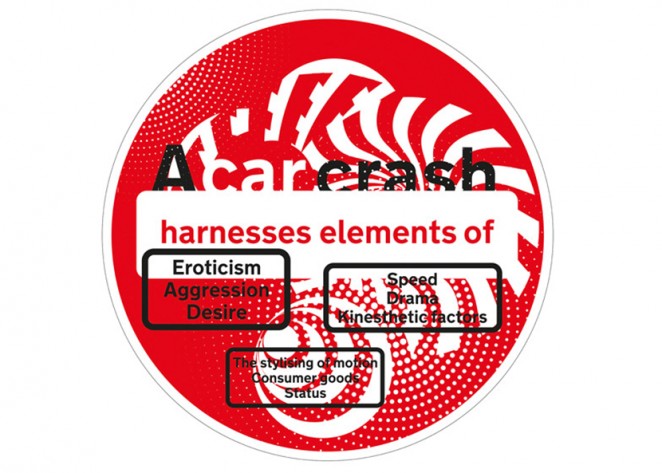 For the Design Museum exhibition, which opened in the museum's Tank and Riverside Hall to coincide with the LDF, but will remain open until October 25, the recognisable graphic shapes and typography have been reinterpreted with different colours, patterns and materials. Designs on show range from Aubrey Powell's prismatic Pink Floyd warning triangle, to Graphic Thought Facility's owlish one-way arrow and Henrik Kubel's typographically-led diversion sign. The exhibition has been curated by Patrick Murphy, director at Made North, the design platform, gallery and conference in northern England. Alongside the display of other designers' work is a selection of the original signs, and a one-off version of the Road Works sign, created by Calvert for the exhibition. 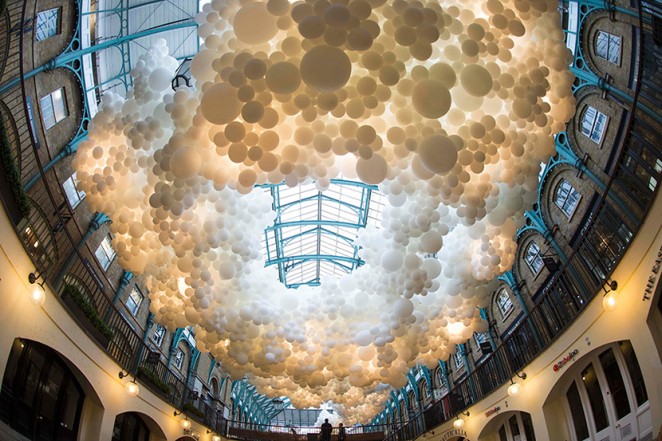 French artist and photographer Charles Pétillion unveiled a cumulus cloud composed of 100,000 white balloons illuminated from the inside at London’s Covent Garden. Titled “Heartbeat,” the installation was created as part of the LDF and stretched the length of the South Hall ceiling of the Market Building. Pétillion is known for his use of white balloons to fill unusual spaces, a photographic series he refers to as Invasions. This was by far his largest installation to date and his first public art piece.

A cumulus cloud composed of 100,000 white balloons illuminated from the inside was unveiled at Covent Garden

He said of his work: “The balloon invasions I create are metaphors. Their goal is to change the way in which we see the things we live alongside each day without really noticing them. With Heartbeat I wanted to represent the Market Building as the beating heart of this area – connecting its past with the present day to allow visitors to re-examine its role at the heart of London’s life. Each balloon has its own dimensions and yet is part of a giant but fragile composition that creates a floating cloud above the energy of the market below. This fragility is represented by contrasting materials and also the whiteness of the balloons that move and pulse appearing as alive and vibrant as the area itself.”

A beautifully distorted tunnel at the V&A 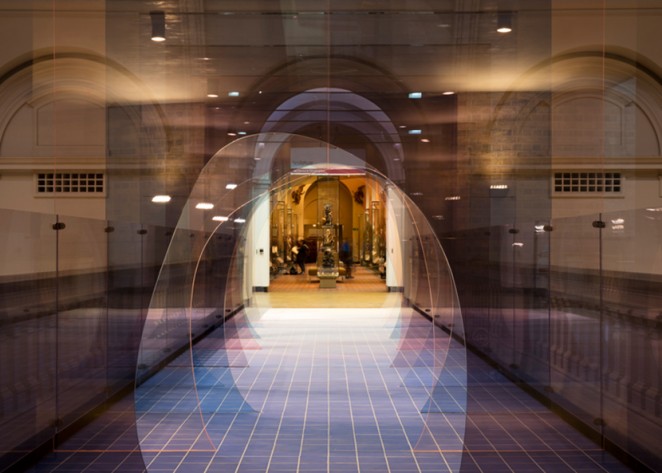 Finally, over at the Victoria & Albert museum, which served as the hub of the LDF, holes were cut out from vertical sheets of coloured acrylic to form a tunnel designed to distort perspective across a bridge linking the Medieval and Renaissance sections of the museum. The “Mise-en-abyme” (which translates from French as “Placed into abyss,” and refers to the artistic technique that shows an image containing a smaller copy of itself in a recurring sequence) was created by London designers Matteo Fogale and Laetitia de Allegri, who were partnered with Johnson Tiles for the project.

At the Victoria & Albert museum, holes were cut out from vertical sheets of coloured acrylic to form a tunnel with a distorted perspective

A grid of custom-made tiles were used to cover the floor, which each row having approximately 3% more colour added to the ceramic than the previous, forming a gradient from light to dark blue across the bridge. Along its length, vertical sheets of acrylic were spaced at intervals and tinted with different hues, remaining almost completely transparent yet slightly reflective. Irregular openings cut out from each panel gradually became smaller along the route while the tints became darker. This served to exaggerate the perspective when looking through the tunnel formed by the overlapping sheets. The effect was pretty dazzling, and was one of the definite highlights of a festival that truly surpassed itself this year. We can't to see if the 2016 LDF can take it further still!