American light artist Leo Villareal and London architects Lifschutz Davidson Sandilands are part of the team that has won the competition to create a series of light installations for bridges on London's River Thames. Villareal and Lifschutz Davidson Sandilands' Current proposal was selected from a six-strong shortlist after a seven-month international design competition which saw 105 entries from 20 different countries. The Illuminated River project will see London’s 17 bridges permanently lit up, spanning a 10km stretch from Tower Bridge to Albert Bridge. Other shortlisted teams were headed up by London studios AL_A, Adjaye Associates, Sam Jacob Studio, New York firm Diller Scofidio + Renfro, and lighting studio Les &Eacute;clairagistes Associés. Pentagram partner Harry Pearce is also part of the 12-strong winning team, and will design the visual identity for a public art project. The original identity for the competition was designed by Baxter and Bailey. The winning team will start to develop the design concepts from the beginning of 2017. It has not been confirmed when the project is expected to be completed yet. 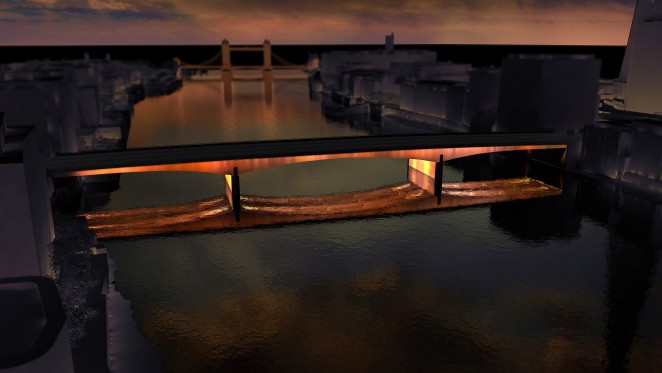 Leo Villareal said of his team's winning work: “The whole team shares a belief in the power of large-scale public culture and art to enrich our cities. In order to nuance the concept design, and create presence and legibility, we intend to take time to study the river in all its manifestations. Our aim is for a lighting masterplan which reduces pollution and wasted energy, is sensitive to history and ecology and subtly rebalances the ambient lighting on the river to provide a beautiful night-time experience for residents and visitors.”

The Illuminated River Foundation charity set up to fundraise for the project has already been pledged donations of £10 million from the Rothschild Foundation and the Arcadia Fund. The Greater London Authority has also provided a grant of £100,000, while the Rothschild Foundation has contributed a further £250,000 and the City of London Corporation has given £500,000. The winner was selected by a jury including artists Michael Craig-Martin and James Turrell, as well as former Serpentine Gallery director Julia Peyton-Jones and Second Home founder Rohan Silva. The winning design envisages London’s bridges as adaptable light sculptures, which will light up more or less brightly in response to the movements of the river and pedestrians. It will work by using computer coding, which will monitor the ebbs and flows of the river and the amount of people walking over the bridges. 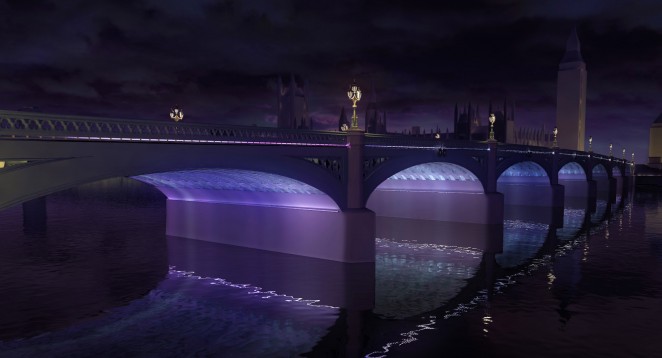 Foundation Chair, Hannah Rothschild, said: “Leo Villareal's proven ability to paint with light matched with Lifschutz Davidson Sandilands' direct experience of building bridges over the Thames was an irresistible and inspirational combination. Their scheme is beautiful, ambitious and realisable but always considerate to the environment, lighting levels and energy conservation. The jury is convinced that the winning team will transform the centre of London while remaining true to the spirit and integrity of the Thames and its communities.” 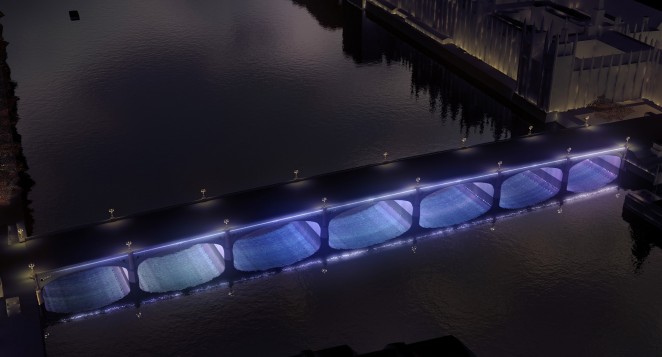 Villareal originally trained as a sculptor, but has been creating works with light and computer code for the last 10 years. The artist's previous light installations include The Bay Lights, which illuminates San Francisco Bay Bridge. Lifschutz Davidson Sandilands is currently working with Stanton Williams on a new University College London campus at London's former Olympic Park. Other members of the winning team included Atelier Ten, Beckett Rankine, Bradley Hemmings, Core Five, Futurecity, Greenwich+Docklands International Festival, MBNA Thames Clippers, Montagu Evans and Price & Myers. For more on the competition, you can read our earlier piece on the other shortlisted entries HERE.