When Advertising Gets Weird!

Adland in the tenties (do you have a better name for it?) is playing it safe for the most part. Whilst the 90s revelled in anarchism and the dawn of the 21st century brought with it some pretty progressive ideas, the last 5 years have been largely vanilla, at least by comparison. There are exceptions though. Marvellous, horrible, frightening exceptions. Here I've gathered a few that caught my attention, and the intention is to turn this into on ongoing series, so if my top 5 isn't weird enough for you, feel free to leave some recommendations in the comments below. As long as they don't give me nightmares!

Let's began in the land of the rising sun, with this spot that borders on the cute, but veers into the creepy when you realise that, without context, it genuinely reads as though a political speaker who just so happens to be a fluffy little alien creature, has hired a high class prostitute for the evening. The multi-coloured lama pictured between shots confuses matters even further. Frankly, I don't even want to know what's going on, and the fact that it's advertising a chemicals manufacturer makes me question their motives. Oh, and it's actually from a US agency called Adcetera. Minds blown?

This Unicorn Changed the Way I Poop

Whilst you might assume (and not without reason) that most of the truly bizarre campaigns would come from the far east, the western world is just as fucked up, we're just not quite as forward about it. Enter this surprisingly charming spot by The Harmon Brothers (the same brand behind the similarly daft “Poo-Pourri” spot from 2013 spot) for. In case you're curious, The Squatty Potty is a legitimate product; a special stool used to help us poo in a more natural manner. I have my doubts, but the spot sure is neat, and the prince charming/unicorn combo is an undeniable winner!

Never Say No To Panda

This Dubai Lynx Grand Prix winning campaign from the mysterious Elephant Cairo agency (mysterious in so much as I can't find a trace of them online) is legitimately one of my favourite campaigns of the last decade, as it's not only well shot, consistently funny and engaging, but it flips expectations in a genuinely unique manner. We've been conditioned to think that when we see a cuddly panda (or any furry beast for that matter) in a commercial that the panda is our friend and ally, but in these delightfully acerbic spots for the Egyptian cheese brand, the panda is a dick. To say any more would be to spoil the fun, so just do yourselves a favour and check it out!

OK, you've probably all seen this one by now from the Officer & Gentleman agency, but I couldn't resist including it here due to the sheer (perhaps apt in hindsight) balls required to release such a spot. It goes against our expectations in a similar manner to the Panda spots (above), but in a much more relatable way. Feel free to insert your own “White Christmas” jokes by the way!

And so we end with another Japanese spot, though this ad was actually created by JWT Hong Kong. The Nissin ramen company isn't exactly renowned for their restraint when it comes to their ad campaigns, but one of their most recent spots also proved to be one of their most uncomfortable. The first half shows a rather typical, Sailor Moon style teenage girl being transformed by her favourite snack (essentially a fancy Pot Noodle) into a noodley super hero. It's not normal by or standards, but definitely by typical Japanese standards). It's the second spot that really dials up the odd though, as a rather quaint and kindly looking old man is given exactly the same treatment. 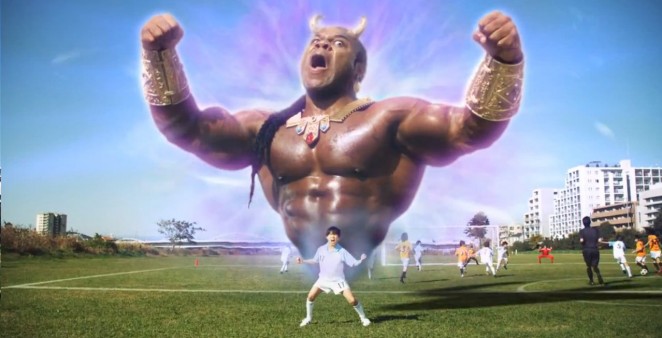 So that's me spent (for now), but as I said, my intention is for this to become a regular series, so I'll hopefully be back with a few more examples of advertising's oddest spots. For now though, I'm genuinely interest to hear from anyone who thinks they can outdo my own list. So. Your move Creativepoolers!

Benjamin Hiorns is a freelance writer and struggling musician from the dark heart of Kidderminster in the UK who now has a fear of pandas.