I'm rarely one to be impressed or amused by self-knowingly quirky gimmicks, but Taylor Herring have taken the art of the advertising stunt to a completely random and wonderfully bold place with this latest creative stunt for Kwik Fit. I'm referring, of course, to Jaffa the giant hamster, which sent Londoners into a surreal spin during rush hour earlier this week, as the 12ft long roaming rodent popped up at commuter hotspots across the capital. Onlookers were left stunned as the furry pedal-powered hamster journeyed its way through the City of London. The oversized rodent was spotted crossing the River Thames via Millennium Bridge, surprising commuters along the South Bank and over taking cyclists on Clapham Common.

The world’s first ‘hamster wagon’ was created by specialist PR stunt agency Taylor Herring for Kwik Fit to coincide with a national TV campaign celebrating the heart-warming story of Jaffa the hamster, who was rescued by technicians after he escaped from his cage on the way back from a visit to the vet. The story was turned into a national TV advertising campaign by Kwik Fit after Jaffa’s delighted owners wrote a letter, thanking the technicians for rescuing the treasured member of the family. It's the kind of story-focused spot that would have probably just gained a small, appreciative following in the pre-internet days, but has definite viral potential, seeing as the spot features two things the internet loves: Cuddly animals adorable little girls.

The hamster wagon took a team of Kwik Fit technicians and design specialists three months to create. He is made from more than 30 metres of fake fur and is pedal powered by a custom-made interior tricycle. Giant Jaffa turned heads in London and set social media timelines ablaze as commuters took to their camera phones snapping pictures and videos. The larger than life creation is controlled by a Kwik Fit technician pedalling on a tricycle with state of the art camera technology giving the driver full peripheral vision and features mounted indicators. So it's actually pretty safe! This isn't the first time Taylor Herring have sent a large, animatronic animal onto the streets of London either, as they created an animatronic polar bear to promote Sky Atlantic's “Fortitude” show last year and sent it on a tour of the capital.

Dhiren Master, Marketing Director at Kwik Fit said of the Jaffa work: “It always raises a smile to hear about the weird and wonderful things our technicians come across on a daily basis. With such a wide customer base, there are no limits to what we could return back to customers next. Rescuing Jaffa the hamster was a fantastic example of how our technicians are prepared to go the extra mile for customers to show they care. We felt the Jaffa story was worth sharing on a big scale which is why the TV ad and our giant Jaffa was born, taking in some of London’s most famous landmarks.”

That's not where the Jaffa story ends either, as Kwik Fit really seem to be doubling down on the courageous critter. You can visit your local Kwik Fit centre during June and July for your chance to spin Jaffa’s “Wheel of Deals” and receive discounts on various services offered. So they've not only created a giant mobile hamster, but a hamster wheel of fortune? Whatever next? 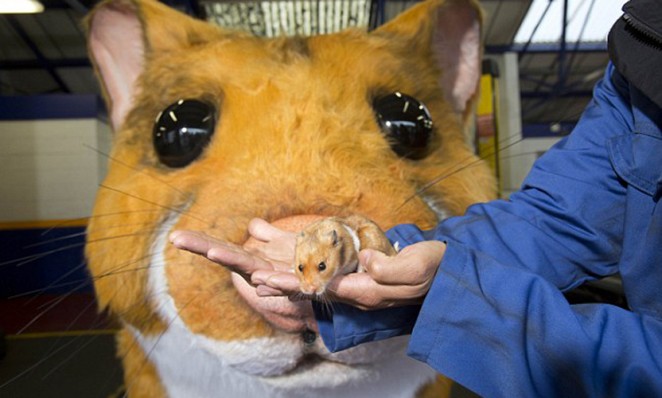