Various high-profile celebrities such as Eddie Izzard, Ross Kemp, Tony Robinson, and John Barrowman have appeared in a new ad launched yesterday in a campaign against Scottish independence. The “Let's Stay Together” campaign seeks to speak to those who might not have a vote in the referendum to make a stand and express their love for their Scottish neighbours. The film is called “Scotland, you're my best friend,” and is soundtracked by the Queen classic of the (almost) same name. The simple, but effective and affectionate spot features a roll call of celebrities golding up placards expressing their desire for Scotland to stay within the UK. The film was directed by Natham Sam Long through Silverfish Media and was produced by Mark Lucas.

The simple, but effective and affectionate spot features a roll call of celebrities golding up placards expressing their desire for Scotland to stay within the UK

The group leading the campaign is fronted by Rainey Kelly Campbell Roalfe/Y&R founder, and Scottish native, MT Rainey and BMB and Seven Dials founder, Andrew McGuinness, and has suppoer from numerous other high-profile figures in adland. The idea behind the campaign is to encourage people from England, Wales and Northern Ireland to lend their voices to the message by adding their names to the Lets Stay Together website. The names will form part of an online wall, which works almost like a more attractive and emotional petition. 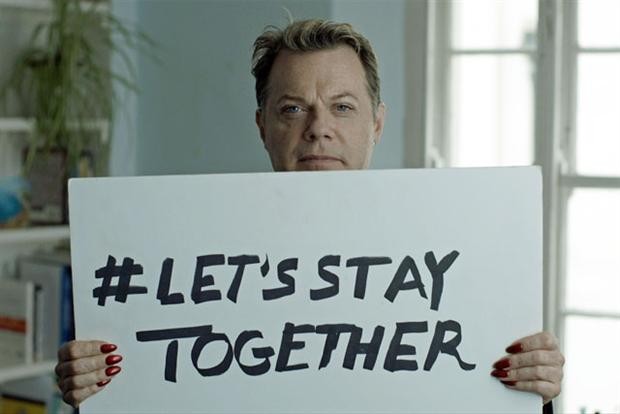 Comedian Eddie Izzard showing his support for the campaign

Though the goal is the same, the campaign is completely seperate from the “Better Together” campaign helmed by M&C Saatchi, which takes a less personal and more political approach. McGuinness says their campaign exists to “Let the Scots know that we want them to stay with us. We want people who have a vote to know that people elsewhere in the UK care deeply about Scotland and want us to stay together." Rainey, meanwhile, says that as a native Scot living in London, he can't vote, so the campaign is his way of doing what he can to help inspire and assemble people to make the right choice on the 18th of September. His hope is that it will give “A voice to all of us who want to express how much we value the UK and Scotland’s role within it.”

Rainey says that as a native Scot living in London, he can't vote, so the campaign is his way of doing what he can to help inspire and assemble people to make the right choice

There are more activites planned by the campaign between now and the referendum, and it also has a presence on both Facebook and Twitter, as well as a specially selected playlist of emotional anthems, which followers can listen to on Spotify. The official website was built by Th_nk, Rainey's own digital agency.

Benjamin Hiorns is a freelance writer and musician from Kidderminster in the UK who has no opinion one way or the other when it comes to Scottish independence.