Digital marketing firm Quantcast hosted a rather ambitious (and some might say out-of-this-world) event on Wednesday (October 21) this week, which brought together some of the top innovators in the creative industries (growing brands, leading publishers, cultural figures and media experts) to share their experiences to discuss the latest opportunities for using data to propel businesses and their media strategies into the future. The Quantcast Supernova data summit took place at The Brewery on Chiswell Street in London, and saw the attendance of over a thousand leading advertisers, publishers and agencies, as well as an elaborate opening athletic performance from Parkour Generations. The event was made up of a series of talks from a roster of leading (and diverse) names including Matthew Luhn from PIXAR, Paul Davies, the director of marketing at Microsoft, and World Cup-winning Rugby coach Sir Clive Woodward, all of whom discussed topics such as “The Future of Media,” “Data's Impact on Advertising,” and “Understanding and Measuring Advertising Effectiveness.”

Arrivals at The Brewery on Wednesday morning

Quantcast SVP of product development Jag Duggal opened the event with a keynote talk that introduced the crowd to what he referred to as the “Data revolution.” He explained that Quantcast, a company that specialises in audience measurement and real-time advertising, is used by now more than 4 billion devices, of which around half are mobile devices. He also added that the company process around 40,000 terabytes of data are per day, has 23 offices and over 700 staff, and owns over 100 approved and pending patents. Duggal said during the keynote: “The sharp end of the conversation on data is just beginning. The data revolution is just beginning. All revolutions start slowly - they are overhyped in the beginning and underestimated in the end. It’s not just us that are connected but the mundane things in our lives, giving rise to a rich tapestry of data. The question is how can we harness it and create products that we have yet to imagine?” Duggal also took to the stage later in the afternoon to discuss “The potential & pitfalls of big data,” when he used US President Barack Obama's record-breaking political campaign, which was the first billion dollar campaign in history thanks to its investment in big data.

Les Binet, head of effectiveness at adam&eveDDB, meanwhile, took to the stage with marketing effectiveness writer and consultant Peter Field to discuss “The big danger in big data.” They argued that what drives effectiveness in the long term is in many ways not the same as what drives effectiveness in the short term, and that long-term success cannot be built by a series of short-term successes. Field said: “There are two ways that marketing can work; sales activation, which decays quickly, or brand building, which decays slowly and creates long term sales growth. Unfortunately a short term view of success makes sales activation seem more important, but if we adopt a longer term view it reveals the impact of brand building.” Binet added: “The biggest driver of return is creativity, second is the budget. Budget should be around 60% brand building and 40% activation. This is where data comes in, when we are choosing the right media for the job.”

Quantcast hosted the Supernova event in London this week, bringing together some of the top innovators in the creative industries to discuss the latest opportunities for using data to propel businesses and their media strategies into the future

PIXAR story supervisor Matthew Luhn, who was one of Pixar's first computer animators and worked on the classic “Toy Story,” took a slightly more creative approach with his talk, entitled “Using data to create the illusion of life.” He explained how Pixar hired a two psychologists as scientific consultants during the making of Toy Story to help the team to understand universal gestures and facial expressions. He said his job is “To create the illusion of life and to get people to feel for these characters,” and that the team at PIXAR, “Don’t actually try and emulate reality, but use data to help us create emotional connections, and tell stories with empathetic characters.” 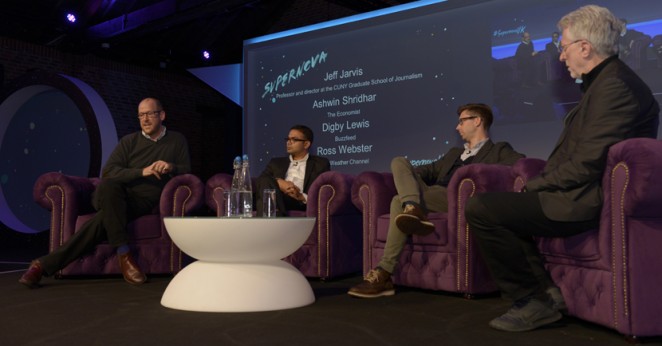 The “Are you paying attention” panel

Microsoft marketing director Paul Davies and Empower MediaMarketing group digital director Leila Ratnani, meanwhile, held a discussion called “Right brain, left brain - The art and the the science of marketing.” Facts brought up during the discussion included the information that during an hour of TV, consumers flip between online screens 21 times, and that 90% of the data in the world today was created in just the last two years! There were also talks from Ed Cole, manager of marketing at Lloyds Banking Group, Jeff Jarvis, director of the Tow-Knight Centre for Entrepreneurial Journalism, and Christian Armond, the general manager of digital marketing at TUI, as well as a panel discussion called “Are you paying attention.” In this panel, Ashwin Sridhar, the global head of revenue at Economist Digital Products, Digby Lewis, director of brand strategy for Buzzfeed Europe , and Ross Webster, MD of International Sales at The Weather Channel, discussed the more subliminal aspects of digital marketing. Lewis said: “Buzzfeed uses content as a mechanic for conversation, we don’t share anything that’s not shareable. It’s something we are able to offer to advertisers. But we’re very clear about what is and isn’t branded, it’s never about hoodwinking.” 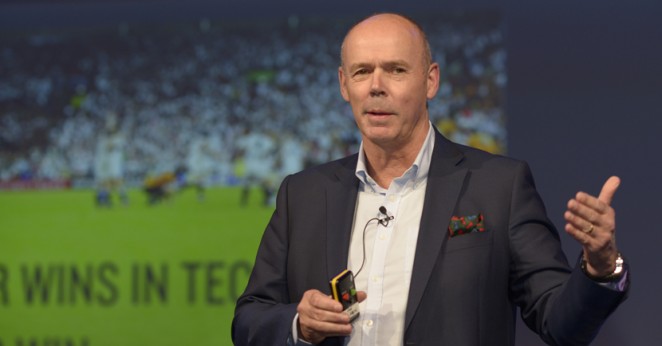 The final talk of the afternoon was from rugby legend Sir Clive Woodward, who argued that “Whoever wins in technology, tends to win.” He explained how data is being used in sport now not only to give teams the upper hand on their own performance, but on the performance of their opponents too. He said: “Talent alone is not enough. It gets you in, but it is the starting position, not the finishing one. Sport is no different to business, whoever wins in IT tends to win. Use it to capture knowledge as it exists today in the form of data, connect with people anywhere, share that knowledge, then cultivate and evolve what you know. We now get data on every single player. Who runs furthest, fastest, who is lazy? But we also get data on all our major competitors. All the mystique and the magic of how they win has gone out of the window. Our players have also up-skilled and started to evaluate their own performance. It’s killed old-school leadership, the players’ thoughts on their own performance have become increasingly important.” 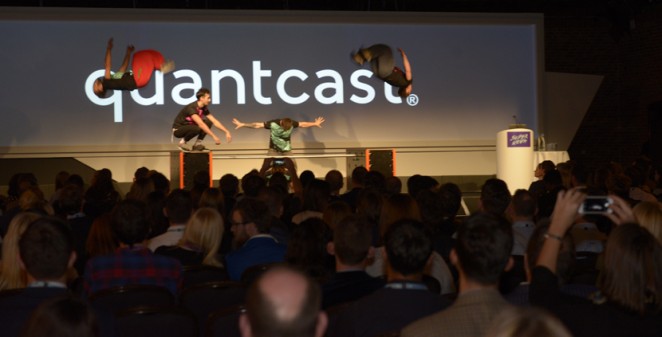 The opening performance by Parkour Generations