McCoy’s, the UK’s number one ridged crisp, is back on TV screens with a £1m campaign to launch the brand’s “Win Gold” competition. Fans of money and crisps will love the new McCoy’s Win Gold competition, giving McCoy’s lovers the chance to win £10,000 if they find 1 of 5 golden crisps hidden inside a pack of McCoy’s. The campaign, created by WCRS, launches on the 30th March with a TV ad and social film that rip up the rule book and bring the maverick world of Flavour to life. In the spot, we revisit the character of Thomas from the latest core McCoy’s ads, receiving another mysterious call from Flavour. As he picks up the golden receiver, and digs for gold in his packet of McCoy’s, his drab office is instantly transformed into a high octane, gold-fuelled world of mayhem. The TV ad is supported by a knowingly cheesy social infomercial, inviting those who like money and crisps to stop digging for gold like traditional amateurs and instead search for the McCoy’s gold. The campaign will run on TV and across social channels until 17th April. Media on the campaign was by Vizeum, with animation from Passion Pictures and post by Coffee & TV.

Daniel Winslet, Marketing Controller at KP Snacks said: “This campaign is all about the thrill of an instant win, whilst drawing a parallel that our crisps taste like gold. Creatively, it pushes the boundaries of the McCoy’s brand and the new 'When Flavour Calls' campaign.” Billy Faithfull, Executive Creative Director at WCRS, added: “McCoy’s don’t do things by halves. So we weren’t about to let this one go without a goldie-looking T-Rex in a psychedelic shower of coins and carriage clocks. Obviously. It called for a simple solution to a simple promotion. It called for Flavour with a capital ‘F’. And we felt only one approach would do. Goldmageddon.” 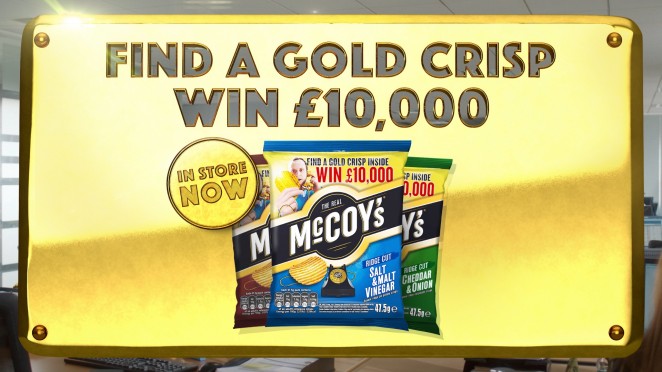