Lions Entertainment, the Festival’s two day-specialist event, kicked-off yesterday, bringing the worldwide entertainment industry together with global brands for a programme of speaker sessions, live performances, curated roundtables and networking. Focussing on the future of entertainment and the role that brands will play within it, A$AP Rocky, Ellie Goulding and Jason Reitman all shared knowledge and insights on the stages. Yesterday also marked day five of the 2017 Cannes Lions International Festival of Creativity, and it ended in a red carpet awards show to honour the winners of the Entertainment Lions, Entertainment Lions for Music, Design, Media and Product Design Lions.

The Entertainment Lions recognise creativity that turns content into culture. From 1793 entries received, 78 Lions were awarded (12Gold, 22 Silver and 43 Bronze) and “Beyond Money” by MRM//McCann Spain, Madrid for Santander Bank took the Grand Prix. The 17-minute science-fiction film stars Adriana Ugarte and launched a new account for Santander. Jury President, PJ Pereira, Co-Founder& Chief Creative Officer at Pereira & O'Dell, said the work was “a perfect example of how a brand can make a statement, but also conquer and earn precious consumer time.”

In terms of UK wins, Channel 4 scooped a Gold Lion in the Entertainment category for its Paralympics campaign, “We're the superhumans.” J. Walter Thompson London picked up the same award for “Ash to art,” its campaign for Glasgow School of Art that repurposed ashes created in the fire that struck the School’s historic main building as an artistic material. A third UK gold went to Black Sheep Studios, the in-house production unit of BBH London, for “Home,” its 20-minute film for the United Nations Development Programme Kosovo that looked at the impact of the refugee crisis facing Europe. “We’re the superhumans” also picked up a Silver – the only one from the UK in this category. Channel 4 also jointly won a Bronze, along with PHD and Drum, for its Lego Batman collaboration. A second Bronze went to McCann London for “Zombie Christmas,” its trailer for Xbox game Dead Rising 4, brought to life in Christmas lights. There were four Golds for US agencies – two for Pereira & O’Dell, New York, and one each for BBDO New York and 180LA. Pereira & O’Dell also won a Silver, while BBDO New York added a Bronze. Other US Silver Lion winners included David Miami, for Burger King campaign “Google Home of the Whopper,” which won the Grand Prix in the Direct Lions earlier this week.

The Entertainment Lions for Music celebrate creative musical collaborations and original music content. 511 entries resulted in 33 Lions being awarded: 5 Gold, 11 Silver and 16 Bronze, and the Grand Prix went to “Original is Never Finished” by Johannes Leonardo, New York for adidas Originals. Jury President, Olivier Robert-Murphy, Global Head of New Business for Universal Music Group, and his jury chose the work, which reinvented the classic hit, Frank Sinatra’s “My Way,” with the sound of a new generation of artists. The work cleverly reinvents the past to create meaning for young audiences and form authentic connections with today’s consumers.

Elsewhere the Cannes Lions jury awarded 33 Gold lions in Entertainment for Music, three of which went to US agencies, including Wieden & Kennedy New York for “We the people,” which featured an original track by Chance the Rapper for an Olympic-themed Nike ad. DDB New York also won gold for Wildlife Conservation Film Festival’s “Dream,” as did All Expanded Brooklyn for Foreign Fields’ “Hope inside the fire.” The most successful UK company in this year’s category was Universal London, which picked up a Silver for Air New Zealand’s “Summer wonderland” and a Bronze for John Lewis’ Christmas ad “Buster the boxer.” J Walter Thompson London won a Silver Lion for “Break the routine,” its challenging ballet performance video for National Centre for Domestic Violence. The work featured a soundtrack by Ellie Goulding. Fancy Shot/ Versus Pictures/ Great Guns also jointly won a Silver Lion for Russian artist Leningrad’s music video for Kolshik.

The Design Lions recognise visual craftsmanship, demonstrating how design defines a brand or communicates its key messages. From 2780 entries, 112 Lions were awarded: 20 Gold, 33 Silver and 58 Bronze, and a first Grand Prix for Thailand went to “The Unusual Football Field” by AP Thailand, Bangkok/CJ Worx, Bangkok for AP (Thailand) Public Company Limited. Jury President Sandra Planeta, Founder & Creative Director at Planeta Design, Sweden, said of the work: “It’s clever, smart, simple, purposeful and useful design. And the best part is that I’d love to try it myself.”

Elsewhere, ManvsMachine London and Nike won a Gold Design Lion for “Go lighter go longer,” a “metaphorical exploration of air and the negative space it occupies” to promote Nike Air Max 2017. The UK took home no Silver Lions in this category, but instead bagged nine Bronze Lions. Ogilvy New York's “The refugee nation” earned three Gold Design Lions. The WPP shop also won a Silver and a Bronze Lion for “Type with pride” for Newfest NYC and a Bronze Lion for Lenovo's “Miniature world.” Ogilvy Chicago picked up a Gold Lion for “The one moment” on behalf of Morton Salt. “Fearless girl,” which has already won Glass and Outdoor Grands Prix awards, won two Gold Lions in this category for McCann New York and State Street Global Advisors. VML's Kansas City's work for non-profit organisation, Youth Ambassadors, “Welcome to my neighbourhood,” also earned a Gold and a Silver Lion. Pereira & O'Dell San Francisco won a Gold and a Bronze Lion for “Writing our writes: the empowerment notebook” on behalf of Ignite. Meanwhile, Snapchat parent Snap picked up a Gold and a Bronze Lion for its photo-taking sunglasses, Spectacles. In total, the US brought home nine Gold, ten Silver and ten Bronze lions.

The Product Design Lions recognise creativity that fuses form and function. The Product Design jurors, led by Ruth Berktold, Owner of YESarchitecture, Germany, selected “Payphone Bank” by Grey Colombia, Bogotá for TigoUNE for the Grand Prix. A purposeful, useful and ultimately world-changing work, it transformed the interface of a payphone into micro savings accounts to support Colombian communities. From 435 entries received in Product Design, 22 Lions were awarded including the Grand Prix - 4 Gold, 6 Silver and 11 Bronze.

SeymourPowell brought home the UK's only Gold Product Design Lion for “creating the world's first modular smartphone” on behalf of client Fairphone. Fairphone wanted a smartphone which was fairer for the environment, those who made it and for the consumer. The result was Fairphone2, “the world's first” ethical and repairable modular smartphone. The UK's only other Lion in this category was a Bronze won by Geometry Global London, Colombia and Bogotá for “Posters for catching fishermen” on behalf of the Ministerio De Ambiente Y Desarrollo Sostenible. In the US, Snapchat parent Snap won two Gold Product Design Lions for the creation of its photo-taking sunglasses, and the remaining Gold Lion went to Ogilvy New York for “The refugee nation” on behalf of Amnesty International. Anomaly New York won a Silver Lion for Hmbldt, a cannabis-oil vape dosing pen and the other silver Lion went to Apple for Liam, the phone disassembling robot. The US also brought home three Bronze Lions, which went to J Walter Thomson New York; DigitasLBi Chicago and the Whirlpool Corporation; and Pereira & O'Dell San Francisco.

The Media Lions celebrate the context of creativity, enhanced and amplified by a game-changing channel strategy. From 2949 entries, 95 Lions were awarded (9 Gold, 28 Silver and 57 Bronze) and “Innovating Saving” by R/GA, New York for Jet.com took the Grand Prix. President Mike Cooper, Worldwide Chief Executive Officer, PHD, led the jury who chose the work by a then start-up retailer for its highly sustainable communication strategy. Driven by price and consumer data, it utilised social media and search insight to produce the commercial results of big brands. The campaign included the brand’s “Super bowl” ad for Jet.com’s bowls, which had nothing to do with the game and ran online only, but featured highly in searches for Super Bowl commercials. The campaign also picked up a Gold for R/GA, one of five from the US – along with two each for Saatchi & Saatchi New York and McCann New York.

The UK’s only Gold went to Manning Gottlieb OMD and adam&eveDDB, which won for Age UK's “No one should have no one”. The campaign also won a Silver. Channel 4, 4Creative and OMD UK, meanwhile, won a pair of Silvers for the broadcaster’s Paralympics campaign. There were five Bronze Lions for UK agencies: adam&eveDDB and Manning Gottlieb OMD for John Lewis, “Buster the boxer”; adam&eveDDB for Waitrose, “Spring”; Publicis London for Tourism Ireland, “Doors of thrones”; Grey London for Comic Relief, “Swear jar”; and Stink Studios for Pinterest, “Your next great idea.” Iris Worldwide also jointly won a Silver and a Bronze with Possible Seattle for the adidas campaign “Breaking the pattern with Adidas Glitch.” There were Silvers for four other US agencies: BBDO New York, Alma DDB, Miami, MullenLowe Mediahub, Boston, and a joint entry from Saatchi & Saatchi New York and Hearts & Science New York. 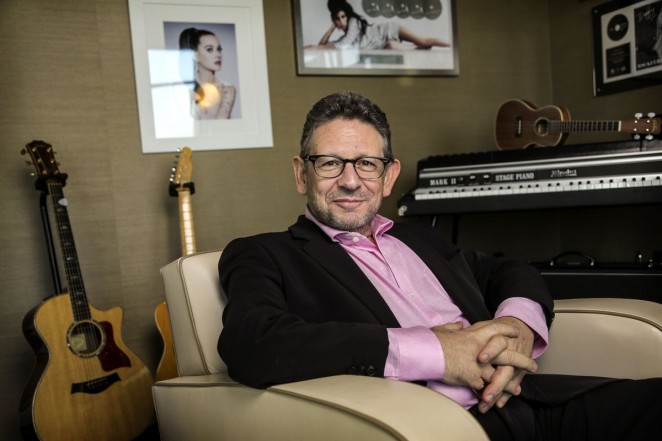 Sir Lucian Grainge (above),  Chairman & Chief Executive Officer of Universal Music Group (UMG), was honoured as this year’s Cannes Lions Media Person of the Year. The award recognises an individual who has shaped the future of creative communications and stands as an influential figure in today’s media landscape. Media Network of the Year was also announced: 1st place went to OMD Worldwide; 2nd place to Mediacom; and 3rd to Starcom.