Agency of the Week: Deutsch LA

Dr Pepper is teaming up with Deutsch LA to remind consumers of the brand’s long and distinguished history in college football by bringing back the inspiring and surprisingly sweet (much like the beverage itself some might argue) Larry Culpepper. Last year, Dr Pepper introduced the concession worker with a heart of gold (and a real mind for the game) through a robust campaign educating fans about the playoff system. As a result, he became an instant college football hero and worldwide trending topic. 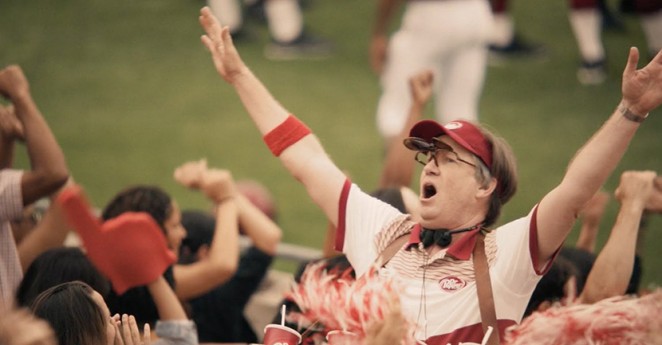 His popularity drove significant business results and social conversation for Dr Pepper and this year, the campaign is even more expansive with six TV spots, five pieces of unique digital content, digital, print, retail activations and new packaging, which rolls out throughout the season. A few of the spots also feature former players turned journalists, Marcus Allen and Jonathan Saunders. The first 30 second spot sees Larry set to prove his doubters wrong. He trains by filling a tray with Dr Pepper and running up and down the stands (Rocky style) so that when the season begins he’ll be ready to reach thirsty (American) football fans. The campaign also includes social media extensions, integrations with ESPN and a campaign microsite, designed by The Richards Group with the intention of making it look like it was created by Culpepper himself.

The California Milk Advisory Board (a thing that DOES actually exist apparently) has collaborated with Deutsch LA to launch a new campaign marking a new focus in the company's marketing strategy. Using real California dairy farmers, “Return to Real” includes four TV spots, an interactive long form online video, digital banners and a robust social media strategy. The spots capture the romancing of food (shot by DP, Kramer Morgenthau using a phantom camera) and focuses on different products made from milk (cheese, yogurt and butter) and represented by the Real California Milk seal.

Each of the ads — “Grilled Cheese,” “Baked Potato,” “Smoothie” and “Pizza” — highlights a common dinner staple either composed of, or elevated by, dairy products, ending with a look at a real California dairy farmer. “Grilled Cheese” for instance, shows the making of “The beloved grilled cheese sandwich” (known as a good old fashioned “Cheese Toastie” here in the UK) before ending with a California dairy farmer telling us he’s proud he could help make such a beautiful thing happen. The only thing we’re wondering is; where’s the Worcestershire Sauce!?

Krylon spray paint, with the help of Pinterest and Deutsch, recently developed a one-of-a-kind 690-mile road trip through the world’s longest yard sale, where old, rusty items were bought and transformed using Krylon paint. It’s a wonderful idea that uses the product in an exciting and imaginative way, and the fact that you could follow the whole thing online made it even more enticing. Between August 6 and 9, Krylon sponsored the “127 Yard Sale,” as it travelled through Alabama, Georgia, Tennessee, Kentucky, Ohio and Michigan, with up to 5000 vendors setting up shop for hundreds of thousands of shoppers. Along the way, TV host Amy Devers, American furniture designer, carpenter, and design blogger met vendors, found great deals, and made a total of 127 old items look new again with COVERMAXX and other Krylon products.

Whilst the sale itself is now over, all revamped items are currently available for sale on Pinterest using Buyable Pins to make a commerce friendly experience! Dubbed, “one of the greatest selling engines ever devised,” Pinterest’s Buyable Pins are taking engagement to the next level. Krylon is one of the first brands of their kind to use the Buyable Pins feature, making this collaboration a unique one. All sale proceeds will benefit the Charity Wings Art & Craft Centre, and at the time of writing, the initiative has already raised $2003!

Down to the final three for Coors Light account!

Miller Coors CMO David Kroll has said there are only three shops in contention for the lucrative Coors Light advertising account, one of which is Deutsch. 72andSunny and the ad shop known as 180 are also in the running. All are based in Los Angeles, which is also home to TBWA/Chiat/Day, which was awarded the Miller Lite account last year. Deutsch is by far and away the favourite, as it has received a lot of attention in recent years for its clever, high-profile work for Volkswagen. The battle among the three agencies Kroll selected to compete for the Coors business began in earnest after Cavalry Chicago was given the shove earlier this month after three years. Kroll said the brewer needed to start fresh with a new ad shop and a new, big idea ad campaign that the brand hopes will lead to volume growth for Coors Light, which has been sluggish in recent times. A final decision is expected by the end of September.

In related news, Mekanism, an advertising and digital shop with offices in San Francisco and New York, was named agency of record for the brewer's innovation brands, including Redd's, Smith & Forge and Henry's Hard Soda. Cavalry Chicago also had handled Redd's and Smith & Forge. The Mekanism appointment is effective immediately.