Agency Christmas Cards: The Best of 2016

Celebrating the beauty and loud/quiet wonder (depending on your preference) of the festive season is something all agencies are essentially required to do, otherwise they'd undoubtedly be labelled as scowling humbug merchants. Still, some agencies genuinely relish the festive cheer with their annual Christmas Cards and initiatives, with many using the opportunity to show off what they have to offer their past, present and future clients. So here we've collected a few of our favourites!

360i clear your browser history with Santa Mode

The clever folk at 360i have created a browser plug-in that prevents loved ones from finding out what you may have bought them for Christmas. “Santa Mode” is a browser extension that clears your cookies and history so you don’t get retargeted with ads of products you’ve looked at. Whether or not it can also be used to disguise certain other browsing habits remains to be seen of course.

isobel proves it is on pointe 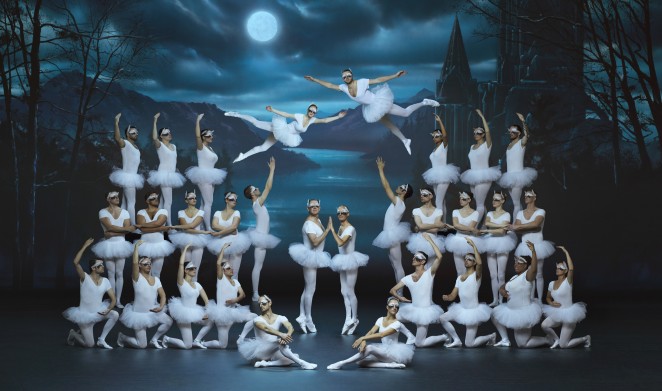 You’ve seen them as monks and you’ve seen them as chavs, but you’ve never seen them like this. Once again, creative agency isobel has gone above and beyond with its Christmas card; this time creating a tableaux from Swan Lake worthy of appearing at the Royal Opera House. The artistic card, which was shot by Paul Thompson with a backdrop painted by acclaimed Brazilian artist Carmel, shows the entire team kitted out in leotards and tutus, is a fantastic embodiment of isobel’s culture (they also host a regular stand up comedy night in the agency, called isobelly laughs) and their approach (and commitment) to their work. The isobel team spent 4 hours in hair and makeup in preparation for the shoot and, altogether, the shoot took around 10 hours to complete! The humour led campaigns for leading brands such as Danepak, Kelly’s of Cornwall and MAOAM which isobel created this year all illustrate the agency's sense of humour, but these annual Christmas Cards, which they have been creating for 10 years now, serve to underline that soft touch.

“We approach all cards the way we approach any project; with creativity, curiosity and ambition, so every year the card becomes more unorthodox” Rob Fletcher, Creative Partner at isobel

Anomaly fit a farm into a London flat

For their 2016 Christmas Card, Anomaly has released a new animated film starring Phoebe Waller-Bridge, which explores the challenge of trying to fit an entire farmyard's-worth of poultry into a small North London flat. In this modern re-telling of The 12 Days Of Christmas, we see that the gifting strategy in the original song is absolute lunacy. How do you cope with such a bizarre onslaught of Christmas generosity? And what do you do when everyone around you seems to have come down with Christmas madness? That’s what Phoebe must find out. It's a clever, genuinely funny concept with some superb animation work and a wonderful message. 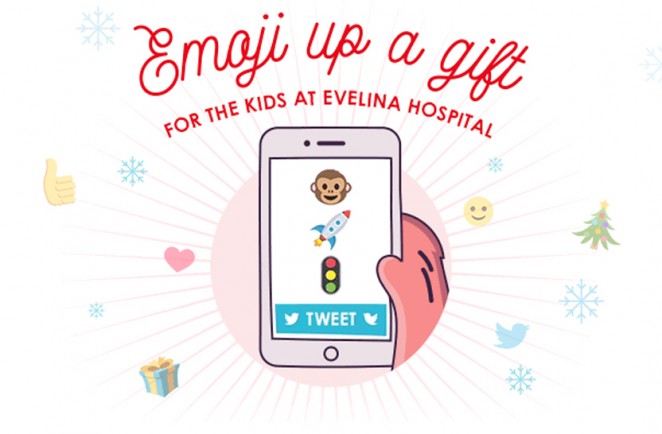 This Christmas, Proximity London wanted to make a true connection between the spirit of giving and doing something that really helped the community. So they have created an alternative Christmas Card called “Emoji Up A Gift,” which is an ingenious present generator using social media, emojis and the industry to send personalised Christmas presents to the children of Evelina London, part of Guys & St Thomas’ hospital. Launching this week, friends of Proximity will receive an email asking them to simply tweet three emojis of their choice to @EmojiUpAGift. There, the agency’s Ho-ho- Matic transforms them into an actual gift based on their meanings. And the first 100 will be delivered to the hospital on Thursday the 22nd of December, ready for Christmas Day. Proximity’s CEO, Gabrielle Ludzker, said: “Christmas is a time for reflection and giving back. But the annual pressure for the Adland Christmas card to be a creative masterpiece can often mean that the seasonal feeling of goodwill is lost. So this year, we decided to focus on helping Santa put smiles of the faces of children who really need them; and get the industry involved too!” You can follow all the gift giving on twitter using hashtag #EmojiUpAGift.

“With Proximity, together we can help make Christmas extra special for the children we treat” Evelina London 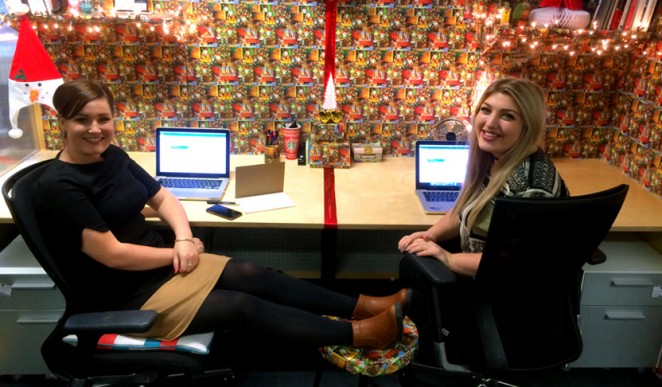 A simple idea here, but one that almost certainly raised spirits amongst the agency's staff. To celebrate the festive season, WCRS has encouraged its employees to literally wrap up their desks in Christmas cheer. It looks like something right out of the modern classic Elf! You can spread the concept yourselves too with the #FestiveDesks hashtag.

With the proliferation of modern distractions like mobile phones, tablets and games consoles demanding the face time of children across the world, the simple, elegant art of the children’s book has been all but lost in the mobile era, which is particularly depressing around the festive season. With this in mind, and just in time for Christmas, AKQA has launched its 2016 Christmas card, which bridges the old fashioned children's story of old with the modern world. The Snow Fox is a children’s story inspired by the winter tradition of telling stories by the fireplace that comes to life by voice and tells a personalised story to every reader. The story itself is a wintry tale of a young child who adventures through the forest with a newfound furry friend in search of his/her mother. But this is no ordinary story. The Snow Fox is literally powered by words. As the child reads, the story animates. When a sentence is finished, the story automatically transitions to the next scene. Word by word the story comes to life, bringing an element of magic to special bedtime story bonding moments between parent and child. Using the latest technology to turn voice into a reading gesture (a mobile first), The Snow Fox gives new life to the oldest form of story while transforming how we incentivize our children to learn. 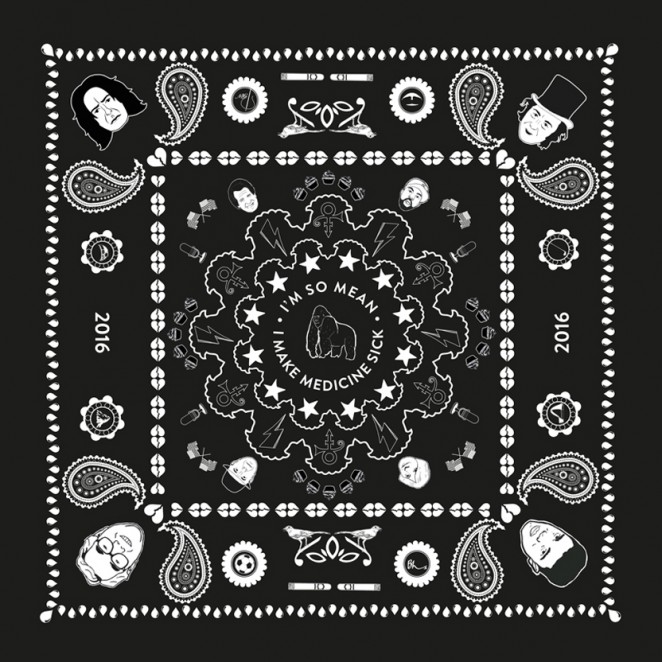 Paying respects with its Dead Legends tribute, Fabula has opted to present handkerchiefs featuring images and representations of some of the stars and icons we were forced to say goodbye to this year. They include Alan Rickman, Prince, Muhammad Ali, Victoria Wood, Ronnie Corbett, Leonard Cohen and, of course, Harambe the gorilla.

Superdream celebrate a ‘Fairy Ale’ end to the year 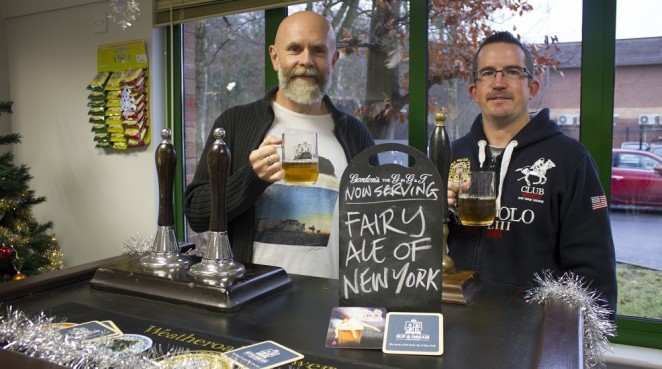 Bromsgrove-based marketing and communications agency Superdream has partnered with the Studley-based Weatheroak Brewery to produce a limited edition beer for the festive season. The “Fairy Ale of New York,” named in homage of The Pogues’ Christmas classic, has been brewed as part of the agency’s festive celebrations which also sees Superdream’s office being transformed into a traditional country pub aptly named the Sup & Dream for the festive season. The Sup & Dream features everything you’d expect from a traditional pub - chesterfield sofas, a pool table, a dart board, a juke box and Superdream’s Fairy Ale of New York beer which will be served from behind a specially built bar. Bringing a new meaning to ‘free house’, drinks and snacks won’t cost a penny. In the true spirit of Christmas, instead of paying for a pint, guests can choose to give a donation which will be split between local charitable causes.

“We’re encouraging friends and clients to join us to participate in a pub quiz, games night and perhaps even a lock-in, whilst helping to raise money for some great local causes” Steve Price, Creative Director at Superdream 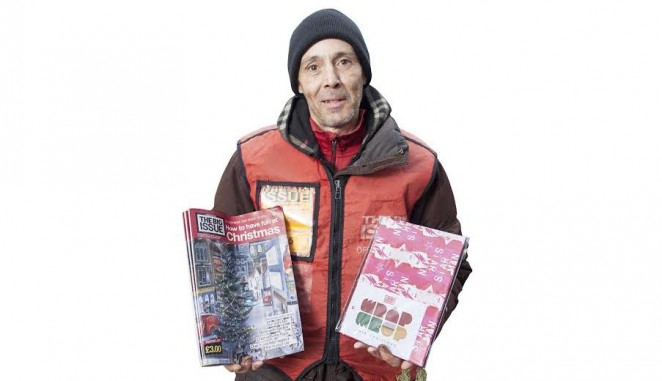 FCB Inferno has launched a range of Christmas wrapping paper for its client, The Big Issue, to raise money for new uniforms for the magazine's vendors. Three celebrated artists have each designed a distinctive print and just 1,700 of each design are available. The paper is being sold for just £1.50 per sheet and can be found on The Big Issue’s e-shop. It includes a gift tag with a quote from the artist on why they chose to get involved.

M&C Saatchi Abel has created a new initiative in collaboration with RocketSeed, entitled Stamps for Good. The campaign allows people to include a virtual stamp, linked to a specific charity, in every email they send. Stamps for Good is made up of ten virtual stamps (tiny pieces of art embedded in every email the subscriber sends), linked to ten different charities. To get involved, the subscriber visits the Stamps for Good website, picks a cause, pays for the stamp that will be embedded in the emails and then the proceeds go straight to the chosen charity. Billions of emails are sent around the world every day for various reasons, so this new initiative allows people to spread awareness of a certain charity with each email. Stamps for Good is currently available to companies only, with each subscription lasting a year. However, there are plans afoot to extend this to individuals in the near future. The charities that users can choose from are: The Haven Night Shelter, Apple-a-Day Foundation, WWF, Habitat for Humanity SA, Project Literacy, The Sunflower Fund, Reach for a Dream, Cotlands, Learn to Earn, and the Animal Anti-Cruelty League. This is the latest initiative for good launched by M&C Saatchi Abel. The agency also recently conceptualised The Street Store, the world’s first rent-free, premises-free ‘pop-up clothing store’ for the homeless, found entirely on the street and stocked by donations. The Street Store recently celebrated its 500th event and has become a global success, with pop-up events being hosted around the world.

“By having one of the Stamps for Good stamps embedded in every email, your company is showing that they care and are making a meaningful difference in the world, and encourages others businesses to do the same” Gordon Ray, ECD at M&C Saatchi Abel 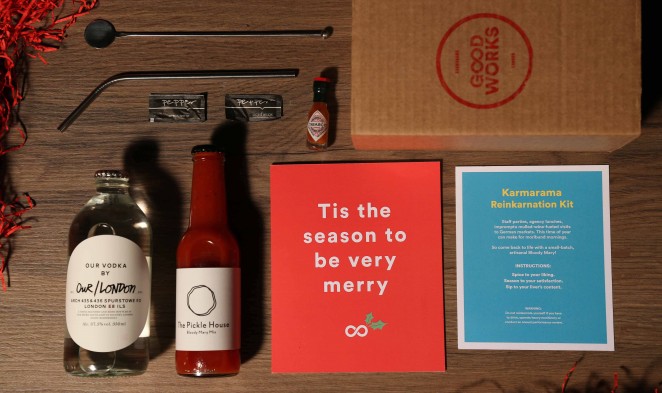 Ending out roundup on a slyly humorous note is Karmarama, who are no doubt celebrating their recent boon (the agency was recently acquired by Accenture in the UK). They have given us a visual remember that, with all these staff parties, social events, networking drinks and Christmas get-togethers, it can be hard work to stay ahead of the game, let alone awake. So Karmarama have got you covered with the “Bloody Mary Reincarnation” kit for those pesky holiday hangovers.

GOLDSTEIN release an album of Hyms for the Hungover 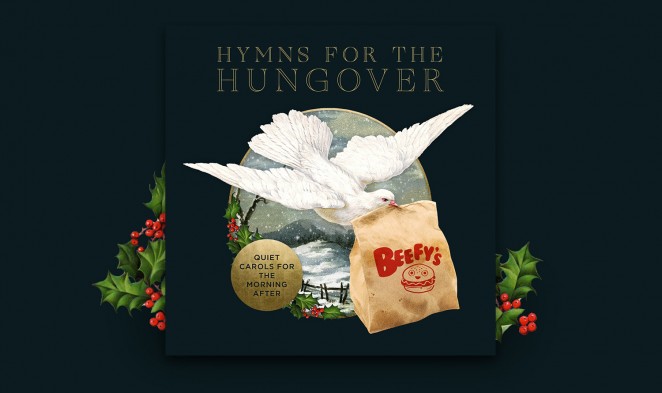 In a similar manner to the above piece, the good folks at GOLDSTEIN are releasing Hymns for the Hungover: Quiet Carols for the Morning After - an album of whispered festive favourites recorded specially with the hungover in mind. It’s a soothing audio alka-seltzer that lets you partake in festive merriment without aggravating your splitting headache and bubbling nausea. Featuring such classics as Deck the Halls, Hark the Herald Angels Sing, Jingle Bells and Joy to the World, the album is available on Spotify or you can get an exclusive listen at http://www.hymnsforthehungover.com.