You are a creative young receptionist working for a small advertising agency. And you have a dream.

Ever since you were little you’ve had an ardent passion for creativity. You remember playing with your mother with cardboard and colours, scissors and glue, and feeling like you were in your element only when you could get creative with your own imagination. You could never afford a formal education in design at university, so you are still spending your nights doing your homework, building your portfolio and skills to stand a chance against a competitive industry. You want to get in advertising.

You have contacts as well. The team of creatives at the agency you work for loves you and recognises your passion in what you’re doing. You are constantly engaged, up to speed, ready to take action and with amazing creative ideas. So you get a chance to showcase your work and portfolio before the leaders in the office. Your excitement is barely measurable, you know this is your only occasion to shine and finally do something you love for a living.

“You don’t have any relevant experience,” you hear. And you’re left hoping and dreaming for a better tomorrow.

This might sound like a novelisation, a made-up character crafted by a creative writer to make a point. These things don’t happen in real life, right? Everyone deserves a chance, and everyone is willing to help someone with the right drive and passion.

Not exactly. This story is the one of a black secretary, as reported to us by marketing manager Muna Hussen. And it happened at a small network of creative agencies, one of those which uploaded a black tile for #BlackOutTuesday.

Mind, I’m not implying that anyone who comes out with a decent portfolio and the right drive should be given a chance to work at an established agency. As a leader and employer, business needs will always be on top of your mind and sometimes passion is just not enough. But I myself was given countless great chances because someone recognised the drive and enthusiasm in me, beyond my limited experience. I consider myself lucky for that. The secretary above can’t say the same.

Episodes of racism, overt or covert, keep happening every day in the creative industry. Even Muna's personal experience involves managing partners saying that “black people can’t swim because of their big bones”, and then arguing when called out; swastikas etched into a lift and not taken seriously for days; senior leadership telling black colleagues to F off to KFC.

Unfortunately, Muna is just one of too many voices that have expressed their concerns and anger all over the Internet, from LinkedIn to Twitter and more. If any of these stories sound familiar, you are most definitely not alone. Episodes of racism remain an issue within agencies, as reported by DigiDay little over a year ago. Even worse is the fact that  not only POC, but BAME representation has dropped considerably last year in UK agencies, as reported by the 2019 IPA census released this April.

This week we’ve seen some of the largest protests ever reported in the past 30 years or so from the POC community. Such widespread discontent shows that racism is still a much alive issue across all industries, and that we are way too far from where we should be.

A black tile shows sympathy, yes. But sympathy is not enough, when taking real action passes in the background. 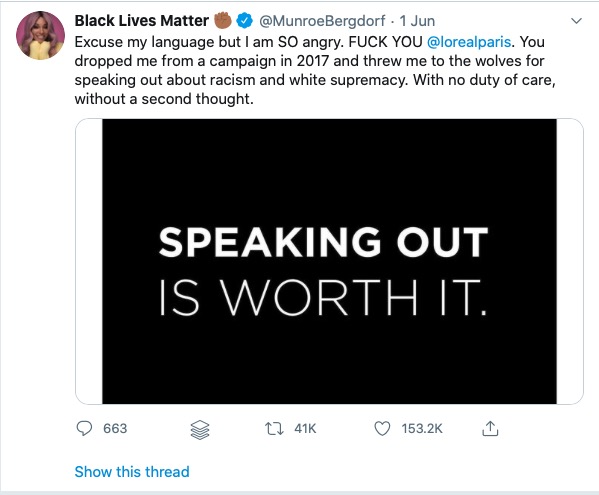 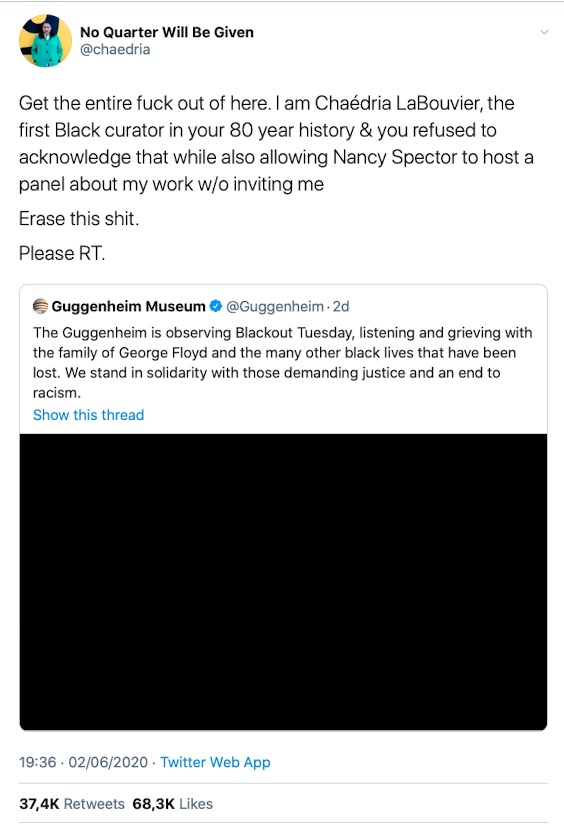 Take the Guggenheim. According to Chaédria LaBouvier's personal testimony, the Guggenheim Museum has refused to acknowledge her as the first black curator in its history. It has also allowed another curator to host a panel about her work without inviting her. The Guggenheim has posted a black tile in solidarity, and people were quick to accuse the organisation of hypocrisy.

Then there's L'Oreal, being called out by model and activist Munroe Bergdorf for dropping her after she spoke out about white supremacy and racism. Was that a move to protect the brand from controversies, or was it a covert episode of racism? Either way, a black tile was not enough.

Same for YouTube, who uploaded a black tile but was criticised for its refusal to ban far right extremism from the platform. As with that old story about Gillette and purpose, consumers will remember a brand's consistency in reacting to controversies and social issues. But even beyond brand reputation, there is a widespread issue about BAME communities being underrepresented even beyond the creative industries.

Charity So White is an association “tackling institutional racism in the charity sector”, the structures of which are predominantly led by people in a position of racial privilege. But even talking about racism and discrimination can be seen as off-putting in a country like the UK.

“Talking about racism is almost seen as distasteful in the UK,” said Muna. “We have inherited generations over generations of racism and we don’t realise how dangerous that is. In order for change to happen, we need to take action in our everyday lives.” 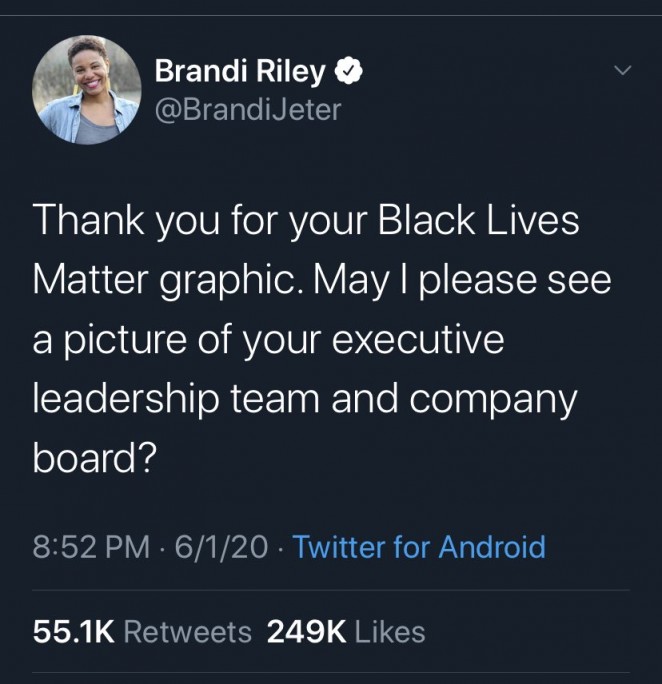 Some find it quite comfortable to blame the system, and that kind of mental attitude is exactly what you can find in the comments below the Guggenheim post by Chaédria. “Don’t blame the Guggenheim for trying to make things work in a sick system,” someone said, blissfully ignoring that the system is made of people, and people are the ones driving change.

Creative Equals has recognised the issue and takes active steps daily to drive change in the creative industries, fighting for more diversity and inclusion for people from all paths of life. It offers change programmes for both companies and individuals, taking active steps to change the creative industries from within and to promote diversion and inclusivity – starting from its executive board.

There are more initiatives and activists around the UK that actively fight for representation. Karen Blackett has been advocating for increased diversity in advertising for years and just this week several advertising leaders have published an open letter to the creative industries, urging to recognise “our own challenges” and show up as an industry. 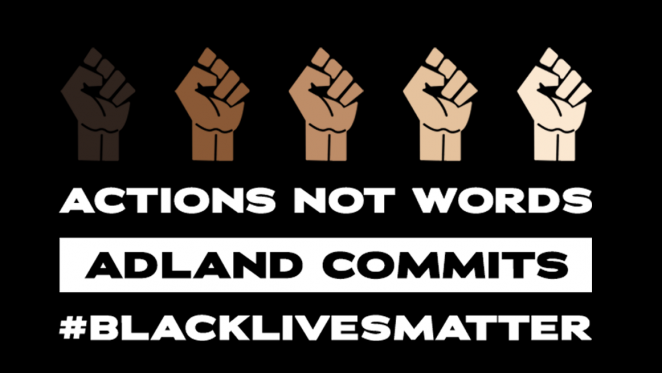 Encouraging diversity means taking action, and it starts from finding proactive ways to attract diverse talent into your business, knowing that not everyone will have the confidence or means to send their portfolio to you.

Muna adds: "The overt episodes of racism in my story and in stories of other black professionals are one example of systematic racism. That affects black people once they're in agencies - but so few of us even make it into agencies in the first place. These are brushed under the carpet and thought of as isolated issues, but actually we can see it's because racism is normalised within our culture as 'jokes' and as stereotypical false and offensive beliefs."

Barriers of entry are too tall and thick for people in underrepresented minorities, creatives and professionals who often cannot afford to spend months in an unpaid internship. Agencies and employers should "put their money where their promises are", Muna says, by offering paid internships or work experiences with a concrete chance of a job offer.

It is not just a matter of future-proofing your business – it’s a matter of doing the right thing for a better society, a place encouraging openness and dialogue, culture and support to all people from all backgrounds.

Just two days ago, the 49ers and the Redskins have been accused of hypocrisy after uploading their black tile. For reference, the 49ers are the former team of Colin Kaepernick, who decided to kneel during the national anthem as a sign of protest. And the Redskins have been widely criticised, multiple times, for refusing to change their name, which can sound offensive to Native Americans. 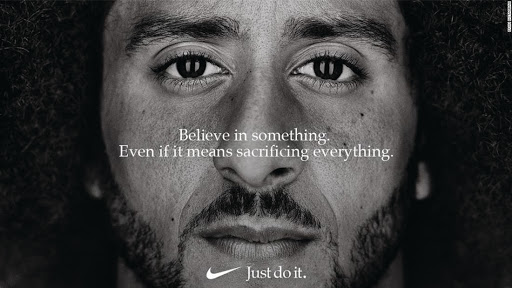 And then, Nike hired Colin Kaepernick for one of its campaigns. A bold brand move, to increase brand awareness and better Nike's reputation? Perhaps. But it was one small step to drive change, in its own way.

How to take action

It is not enough for the creative industry to upload a black tile and call it a day. It is not enough to host a conference every three months about diversity, if your executive board is exclusively (or predominantly) made up of white western males. So long as episodes such as the one of the secretary will keep happening, change will never take place and diversity will never be encouraged nor fostered outside of yearly speeches and patronising events.

There are hundreds of initiatives you could dip into to drive real change for the POC community. If you are in the creative industry and can afford it, you could donate to causes and charities in need for funding. Here are just some:

And more, which you can find on this page from the Independent.

You could also sign petitions, such as Justice for George Floyd. Most of them will be on Change.org and will need all the help they can to get under the right eyes.

There are books to read, documentaries and films to watch, countless resources to explore the Black Lives Matter movement and better understand the current situation of the POC and BAME communities. All of these can be done from the comfort of your home, especially during a pandemic.

Change needs to happen every day, with small efforts, by taking pro-active steps to make a difference. We hope that, with this article, Creativepool is doing something to support the POC community – though we are aware that enough is never enough.

If you have stories for us about the creative industries, things we could add to this piece, or you know of something we may have missed, please write it in the comments section. At Creativepool we believe in diversity and inclusion at all levels and we will always take a stand to support those in need.

Because the next George Floyd could be you, or someone you love.