White Lodge, the award-winning creative direction and production house for the fashion, luxury and lifestyle industries, recently announced that Dutch director Menno Fokma has been added to their growing roster of clients and unveiled the first piece of work for his new benefactors. Fokma is a skilled director and visual artist based in Amsterdam, whose work, which has encompassed everything from fashion shoots to music videos, tends to focus on creating a cutting-edge mood, whilst (according to the man himself) “Pushing creative boundaries and exploring new ways of visualisation.” His previous clients have included such names as Heineken and MTV, and his work has been featured at The Holland Animation Festival, and on Ffffound, Behance, Ventilate, Motionographer, Flylyf, Fubiz and Computerlove, amongst other top sites, and blogs. Fokma is an artist who dabbles in both the commercial and personal, with both fields influencing and nourishing each other in “A natural a positive way.”

Fokma's first project for White Lodge is an ambitious fashion film for River Island's Design Forum. It's a collaboration with renowned British menswear designer James Long, and debuted at an exclusive London Fashion Week screening on Monday night (January 12), which was attended by model-of-the-moment, David Gandy. The film was shot at the famous Pinewood studios with post production work courtesy of Happy Finish. It showcases the brand's upcoming Capsule collection, and features a variety of emerging male models. The film, which can now be viewed online (below) is a surreal and cinematic experience with a faintly post-apocalyptic and mythological edge and a killer soundtrack courtesy of Icelandic alt-rockers Fufanu, whose “Circus Life” composition lends the piece an air of subtle melancholy.

Long's SS15 collection, which is displayed rather elegantly in the clip, is the latest to launch as part of River Island's Design Forum scheme, which aims to provide a platform for young up and coming designers to create limited edition collections each season. The idea is to create “One-off collections which push the boundaries of fashion to the high street.” The scheme first launched in 2012 and has so far housed designs from such names as Georgia Hardinge, Julian J Smith, Tom Lipop, William Tempest, Eudon Choi, Katie Eary, Joseph Turvey, Liz Black and Baartmans & Siegel. Long's collection will launch next month alongside a collection from Jean-Pierre Braganza. 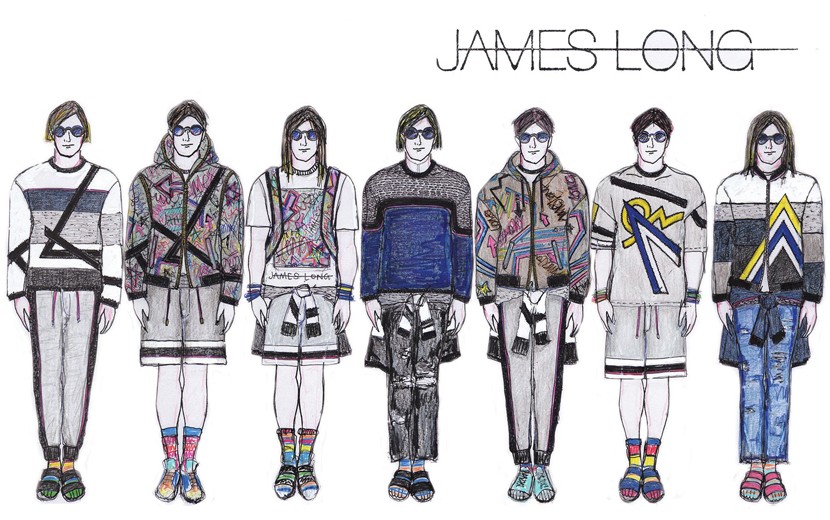 Long is a designer known for his sartorial take on sports wear, and his latest collection is made up of an eclectic array of items, such as a hooded bomber, an oversized t-shirt and neoprene joggers. Of the collection he said “It’s an exciting time for menswear in the UK, so it seemed like the perfect time to collaborate with River Island.” He added that he thought he could “Create a line that is perfect for the modern man,” and believes that each piece in the collection is “Something special that you can mix into an eclectic wardrobe.”