If recent rumours are to be believed, it appears Apple are no longer content with simply ruling the gadget roost, they want to conquer the automotive world too. According to The Wall Street Journal, the tech giants are planning on throwing their hats into the electric car ring, with a top-secret project to develop an electric car with a design that “Resembles a minivan,” according to an unnamed source. The same source also divulged that Apple CEO Tim Cook approved the project almost a year ago, and that the team working on the vehicle include vice president Setev Zadesky, who has former experience at Ford. The news might not be as surprising as you'd think, considering that the Financial Times recently reported that Apple had allotted as many as 1000 staffers on an R&D project into car tech that includes Johann Jungwirth, the former head of R&D at Mercedes-Benz.

Apple are reportedly designing an electric car that resembles a minivan

The project has been codenamed “Titan,” and would (if it the rumours turns out to be true) mark a dramatic leap for the company who are better known for their handheld devices and computers. The vehicle would almost certainly use the company's “CarPlay” system, which they introduced last year for Ferrari, Volvo and Mercedes-Benz vehicles, and allows drivers to use their iPhones through their cars' built-in HUD. It would also mean that reports Apple have been seeking to poach employees from Tesla (perhaps the world's most famous electric car manufacturer) make a lot of sense, and could further legitimise mainstream acceptance of the electric car. Of course, this being Apple, the iCar (please don't call it that guys) will probably set your back a small fortune, but I bet it'll look bloody fantastic!

Anyone over the age of 20 will remember the View-Master fondly. In a world before smartphones and the internet, and the boundless distractions that they have thrust upon us, the View-Master was a gateway into another world. Prepare to reignite that passion, as the View-Master is making a comeback this year! Of course, the newView-Master, which Google is creating in partnership with Mattel, will far surpass the old model, with the 2015 model able to give users access to 360 degree “Photospheres.” It works with the Google Cardboard VR glasses and a bespoke Android app, and will be marketed primarily as an educational tool for children. It will be available in the US this autumn for just a shade under $30, and will be sold with a sample reel including a gallery of “Classic View-Master images.” Additional reels can be purchased for $14.99 each.

Doug Wadleigh, senior vice president and global brand general manager for Toy Box at Mattel, said “The View-Master was first introduced at the 1939 World's Fair in New York, giving consumers access to spectacular 3D worlds by simply selecting a reel and looking through a device.” He adds that the new device combines “Technology and innovation with a classic toy” and gives kids an “Enhanced experience allowing for play opportunities not yet imagined through new, digitally curated content.” He is delighted to be working with Google to bring “The discovery and immersive viewing experience of the View-Master to the digital age.”

US President Barack Obama released an amusing two-minute film to Buzzfeed over the weekend and racked up an impressive (some might say presidential) 30 million views on Facebook. The video aimed to spread the word of the health care insurance deadline, which fell yesterday (February 15. Titled “Things Everybody Does But Doesn't Talk About,” it shows the president playing with a selfie stick, practicing a speech in the mirror and practicing his posing skills. My personal highlight is when he struggles to pronounce the word “February.” Do you think David Cameron and Ed Milliband should be creating their own Buzzfeed videos for the upcoming general elections over here? Or would that be a fate worse than death? Sound off below! 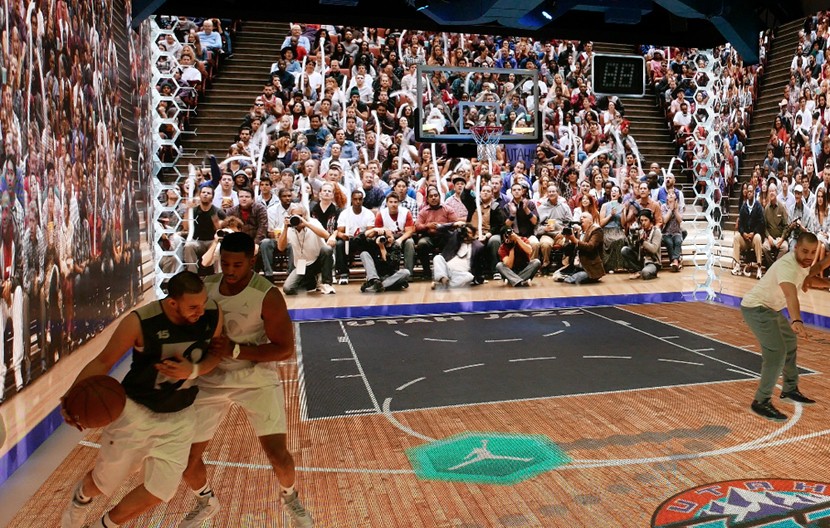 Nike's Jordan brand has created a unique virtual experience for fans of the label's namesake at the Pearl Pavilion in Penn Plaza, New York in celebration of the brand's 30th anniversary. The experience includes a fully responsive LED basketball court that lets the next generation of aspiring basketball stars recreate two of living legend Michael Jordan's most famous shots. The experience by AKQA is called “The Last Shot,” and seeks to show today's teenagers (who might have been too young to remember) the “Man behind the brand” in his glory days.

The experience includes almost 10 million LEDs across 876 screens that completely cover the floors and walls of the space. It will effectively put fans in the shoes of Jordan as he undertakes two of his most famous moments. Every minute details from the sneaker squeaks down to the shouts of Jordan's teammates has been painstakingly recreated, with lights on the floor guiding fans through every move and the crowd, and court graphics, reacting to the graphics on court. There is also a “Slam Dunk Camera,” which will record videos of each experience that can be shared on social media. It also includes a history lesson on Jordan, as well as photo booths that allow visitors to have their portrait taken with the tagline “I’m not Michael, I am Jordan.”