The top brands preparing us for the Royal Wedding

Even those of us purposefully trying to avoid the impending nuptials of Prince Harry and American actress Meghan Markle this Saturday (May 19) can't deny that it has given marketers an excuse to flex their creative muscles. Whether those muscles are comedic, genuinely sincere, or somewhere in between, the results were always going to be worth examining, at least in brief. On that note, here you'll find the very best (and the very worst) that the biggest brands have to offer in celebration (or at least veneration) of the big day. 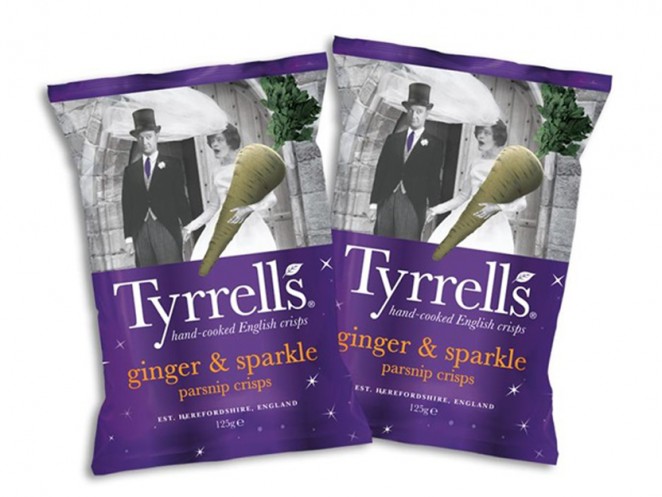 Posh crisps brand Tyrrells (if you've ever visited a micro pub, you've probably indulged in a pack or 5) has decided to launch a bespoke parsnip flavoured crisp for the occasion. Boasting hints of ginger and honey (not too subtle there) with added edible glitter, I can't comment on the taste of the crisps themselves, but if I manage to get my hands on a bag between now and Saturday I'll be sure to let you all know my flavour notes. 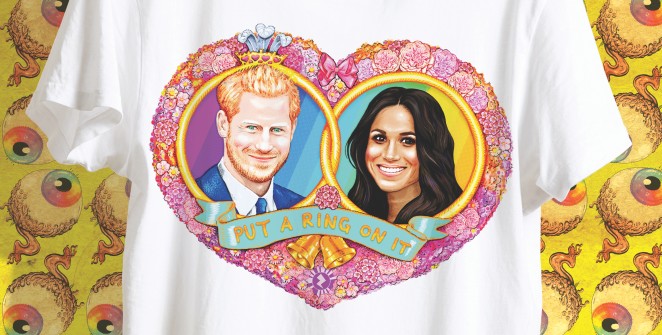 Iconic fashion designer Philip Normal and artist collaborator Jock Mooney have come together to create one of their famed designs, supercharged by Zappar’s augmented reality tech. In celebration of the 2018 Royal Wedding, the AR-powered t-shirt will let anyone marry a royal! The t-shirt has a small zapcode embedded in the design, which once scanned with the free-to-download Zappar app, enables wearers to choose to either “Marry Harry” or “Marry Meghan.” Once in the experience, users can pose for a selfie using the front-facing camera on their smartphone or tablet, placing them within the artwork next to their chosen royal spouse. #royalwedding will be used across Twitter and Instagram by our augmented reality married couples to share their moment from the app. As part of the AR experience, wearers will also be able to place their selfie onto a piece of royal memorabilia.

To celebrate the wedding, dating app happn will be giving away something VERY special!  For all those couples that match on the app on the day of the Royal Wedding and decide to get married to their 'Crush' anytime after May 19th 2019, happn have essentially offered to pay for their wedding! 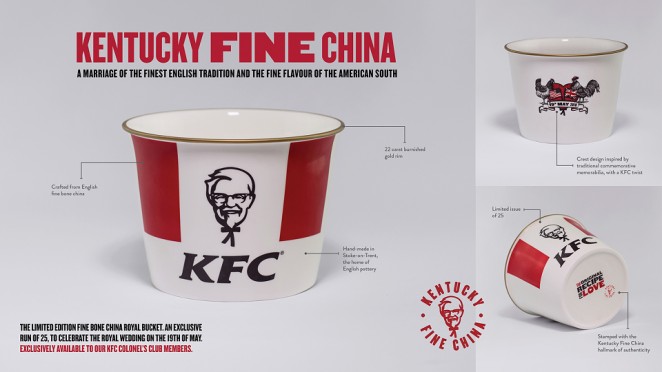 Billed as a "marriage of the finest English tradition and the fine flavour of The American South," KFC teamed up with the Iris agency and Milton China in Stoke-On-Trent to celebrate the royal wedding with style. Limited to a run of 25, these fine china KFC buckets look incredible are are available to win exclusively to members of the Colonel Club via a bespoke app.

The chicken chain is also giving away 50 "specially designed buckets" at a location near Windsor Castle. A KFC spokesperson said: "When we discovered Prince Harry proposed over a roast chicken, we simply had to show our support for the big occasion. We’re preparing for a rush on orders next Saturday as the people of Windsor flock to our Dedworth Road restaurant to get their hands on this priceless piece of British history."

Legoland Windsor is a stone's throw from where the big day is taking place at Windsor Castle. To celebrate, the resort has created its own miniature Windsor Castle built from approximately 39,960 Lego bricks. This one I'll admit is genuinely quite apt, so no snide comments here.

The self-fizz soda brand has been waging war on the bottled-drinks industry for the last couple of years in the name of environmentalism. Now, Sodastream is getting the Royals involved by auctioning off 50 limited-edition Royal Wedding bottles, each of which is topped with a hat inspired by a real-life chapeaux won by the Royal Family. All proceeds from the auction are being donated to the Surfers Against Sewage charity, so at least you can morally legitimise shelling out such an obscene amount on (not-so) fizzy pop. 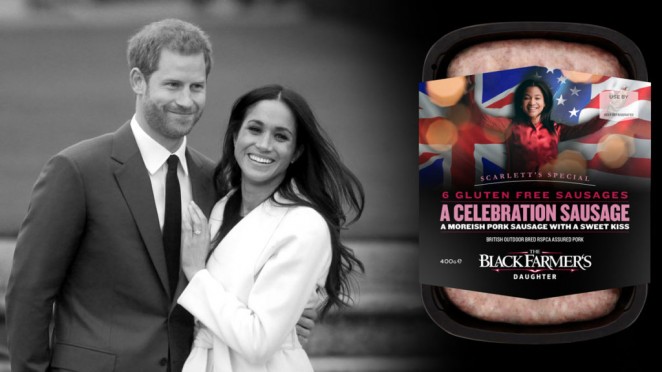 Organic sausage brand The Black Farmer is marking the big day with a special-edition sausage celebrating the mixed heritage of bride-to-be Meghan Markle. Wilfred Emmanuel-Jones' very own daughter Scarlett (herself of mixed heritage) appears on the packaging for the gluten free “Celebration Sausage.”

The 2018 Royal Wedding Ceremony will officially (sic) be recorded live and released on Decca Records/Universal Music Group within hours of the service ending on Saturday afternoon. Decca, one of Britain’s most historic record labels, will have the privilege of capturing the entire service. The official recording of the service will be available to listen to at home that same day via streaming services, then released into retail stores around the world from 25th May.

Harveys and Bensons for Beds have created a special collection around the royal wedding. The centrepiece of the collection is a sofa adorned with Great Britain flags, including two cushions embroidered with a H and M to represent the royal couple. The sofa can be yours for a princely £1,279 and can even be reversed (if you change your mind). 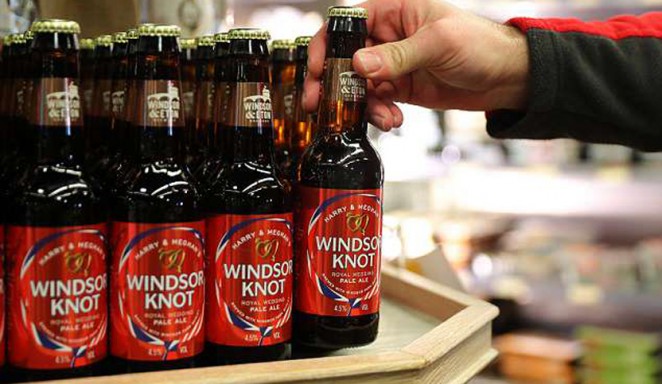 A brewery in Windsor itself has created a very special brew for the occasion. The “Harry & Meghan's Windsor Knot” pale ale combines British and American hops, barley grown on the Royal Farms next to Windsor Castle. The finishing touch is champagne yeast. The Windsor Knot ale was first brewed for the wedding of Prince William and Kate Middleton. 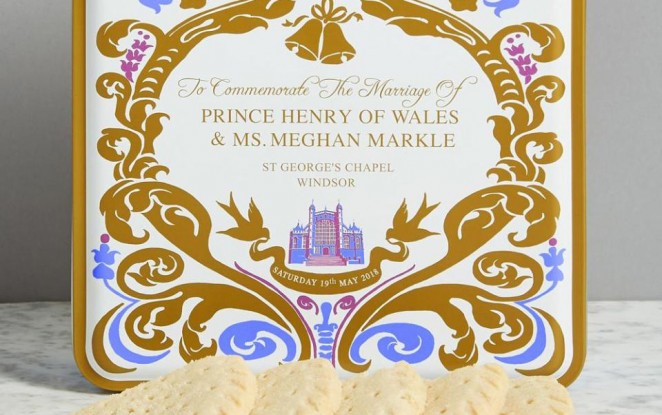 M&S have done the very M&S thing of designing a special tin of biscuits for the (literally) royal occasion. The tradition biscuit tin is priced at £6 and is inscribed with the words “To commemorate the marriage of Prince Henry of Wales and Ms. Meghan Markle.”

What's more British than a tin of biscuits you ask? Posh sandwiches of course. To celebrate the wedding, and playing on the fact that Harry supposedly proposed over a roast chicken dinner, Marks and Spencer has temporarily renamed its roast chicken salad sandwich as "The Proposal." It probably still tastes the same, but I'm not complaining. 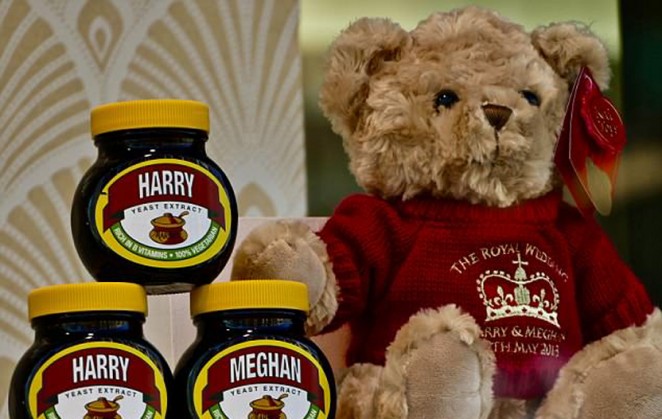 Among the numerous obviously ridiculous Harry and Meghan-themed products are a set of commemorative jars on sale at the Daniel department store in Windsor. The jars aren't officially being sold by Marmite, but instead seem to be designed by fans using an app. The names of the happy couple are plastered over the jar, replacing the brand name. So this isn't official, but it seems legitimate enough to mention.

The National Bobblehead Hall of Fame 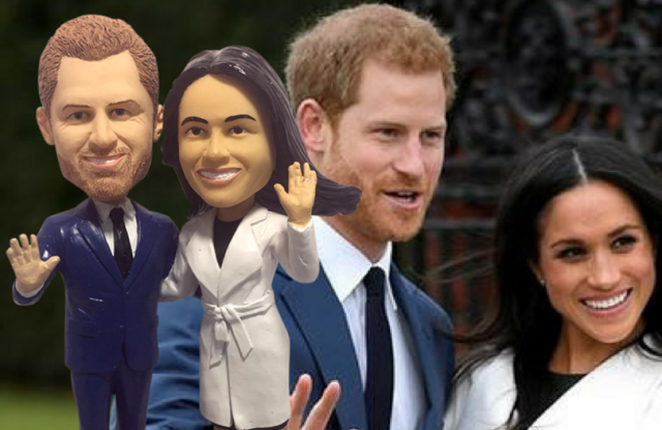 Forget the royal wedding-inspired mugs, tea towels and wooden spoons, the National Bobblehead Hall of Fame and Museum has released a bobblehead of Prince Harry and Meghan Markle. The beaming figurines are meant to be reminiscent of their engagement announcement. The bride-to-be waves in what is meant to be the emerald P.A.R.O.S.H. dress and the belted white Line the Label coat. 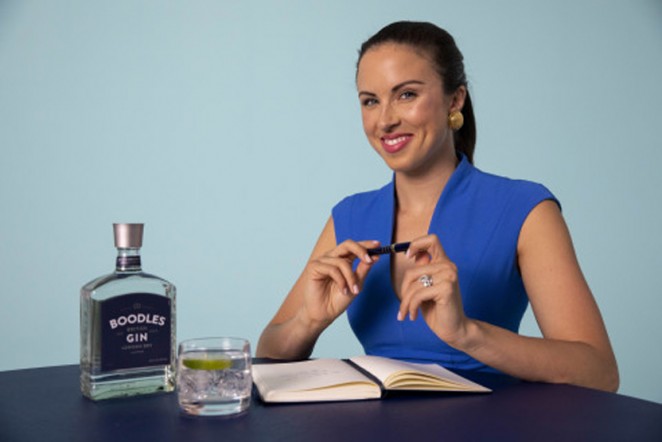 Britain’s oldest cultural institution is preparing to embrace its new American influence with the arrival of its new royal. Inspired by this cultural shift, Boodles Proper British Gin is marking the occasion with the unveiling of its new brand platform – The New Proper. Boodles Gin launches The Boodles Guide to The New Proper just in time for the #RoyalWedding. Designed to usher Americans everywhere into a new age of what it means to be “truly proper,” the campaign celebrates a modern era of etiquette and style with a respectful nod to Boodles’ British heritage. From what to wear to a wedding to the best way to drink a cocktail and shake a hand, The New Proper leaves no old school tradition unchallenged as Boodles Gin ushers its stodgy ways into the twenty-first century. 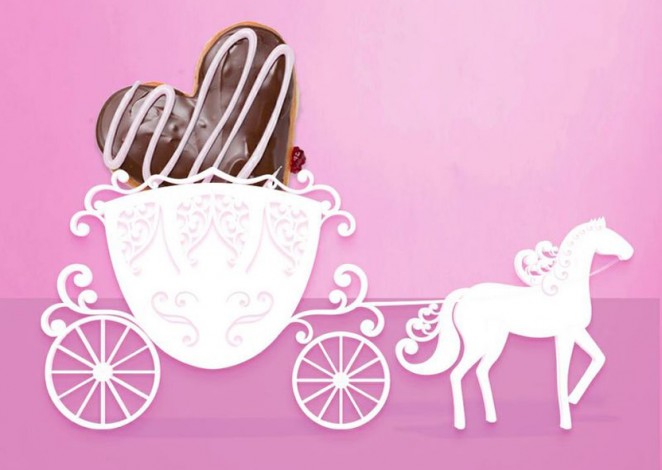 As the world awaits the Royal Wedding, Dunkin’ Donuts is feeling the love, introducing a special new donut that fans might consider a crowning achievement in wedding-themed treats. Dunkin’ Donuts has unveiled the new Royal Love Donut, perfect for serving up a little sweetness while readying for the royal festivities. A heart-shaped donut filled with jelly and frosted with chocolate icing and a strawberry drizzle, the Royal Love Donut will be available for a limited time May 14 through May 20 at participating Dunkin’ Donuts restaurants nationwide.

Friction Free Shaving, the luxury women's shaving subscription company, is giving away pre-shave scrub, shave cream and post-shave balm in celebration of the big day. The brand is running ads this week to promote the offer with some truly woeful puns. "Tame your heir" indeed.

Strongbow is trying to cash in on what it calls the American obsession with the royal wedding by rolling out a new flavor of cider and special teacups in the US. Strongbow is a British brand trying desperately to expand in the US, so it makes a lot of sense to push the connection, but this one feels a little too on-the-nose for me.

Burger King thinks that if Meghan Markle was a burger, she'd be a "tender piece of chicken wrapped in a special crispy coating, nestled in iceberg lettuce, drizzled with barbeque sauce and ... topped off with two crispy onion rings." If I was her, I honestly wouldn't know whether to take that as a compliment or an insult. The so-called "American Royale" will be available until May 20 and it's also almost 60% cheaper than the typical Chicken Royale. Again. Insult or compliment? You decide.

US restaurant chain Chili's is giving away a limited number of food-themed fascinators and cuff links to celebrate the royal wedding. Chili's said in their press release: "You’re probably wondering 'Why? Why did Chili’s create burger, rib, fajita and margarita-inspired fascinators and cufflinks?' Well, because - 'Why not?'" Fair enough.

I think this one speaks for itself. I will say, however, that I actually covert these horrible Pez dispensers quite profoundly. But only because I have a soft spot for truly rubbish things. That being said, somebody supposedly paid $9,897 for these one-of-a-kind sweet dispensers. Somebody I probably wouldn't want to meet. 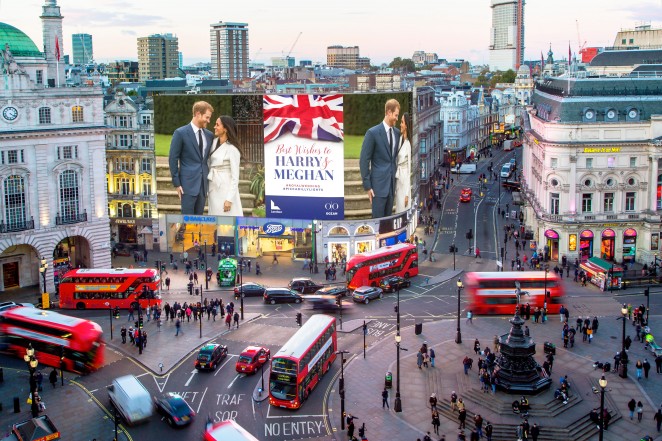 London’s two biggest advertising screens will join the nation’s Royal Wedding celebrations this weekend. A live stream of the big day as it unfolds will be broadcast on London’s biggest full motion retail screen in Westfield Square which is operated by Ocean Outdoor for Westfield London. The screen measures 21.12m x 10.58m, making it as wide as the BFI London IMAX screen. Live broadcast coverage provided by the BBC starts from 11:15am as wedding guests and members of the Royal Family arrive at St George’s Chapel in Windsor, followed by the ceremony itself and then the lavish carriage procession along the 2.5 mile avenue Long Walk. The digital out of home screen sits within the newly-opened Westfield Square, an outdoor events space at Westfield London. To mark the occasion, the Square will host a number of Westfield retailers celebrating in style with complimentary sampling and limited edition offers, with the audience seated in deckchairs. An image from the wedding will also feature on the iconic Piccadilly Lights. A photograph of the newly-weds accompanied by a message of congratulations will be displayed on the large format curved screen for 40 seconds twice an hour from Saturday afternoon until Sunday evening. This is the first time a royal wedding has been celebrated on the London landmark.

Benjamin Hiorns is a freelance writer and muscian from Kidderminster in the UK.