The power of a handwritten letter to inspire a creative department

During lockdown we have all found ourselves with more time on our hands. A few days ago I decided to have a sort out and digging through drawers in the studio I discovered a handwritten note from 2004. 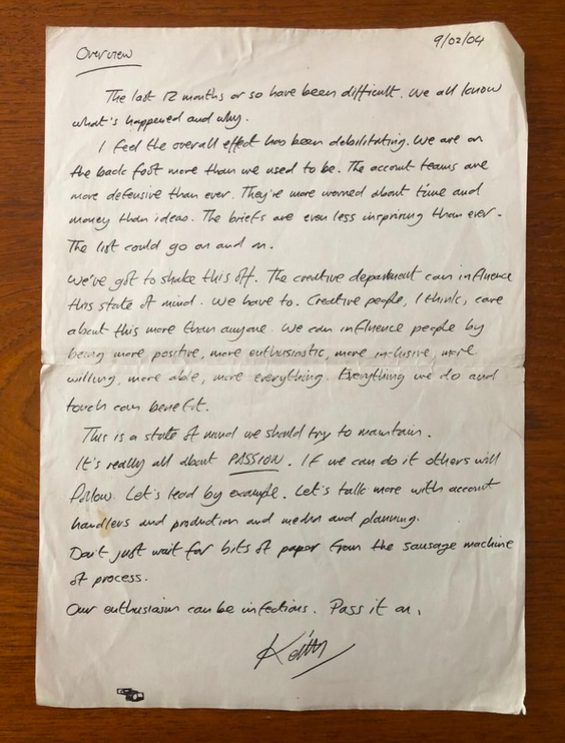 I was an Art Director at an agency in Leeds, UK called Advertising Principles. 'Principles' as it was known by most, was a large well established and highly respected agency alongside other large Leeds' agencies such as Brahm (later called Brass) and Poulters, all sadly long gone. These were all large agencies in Leeds that were doing great work with big London clients.

Anyway, I can't quite remember exactly what happened in 2004. I'm assuming a client had been lost, or budgets had been cut, but I do remember a general sense of anxiety and stress in the agency across account teams and certainly within the creative department. I remember my copywriting partner, Jerry Gross, and I being slightly worried about the lack of work in the department and rumours that things were tough. There was certainly a sense of stress across the agency.

One morning I arrived at my desk early and saw this handwritten letter. I noticed that the letter was on everyone's desk in the creative department. It must have struck a chord then for me to have filed it away and to rediscover it again 16 years later.

An email would have been quicker and easier

Reading the letter again I'm struck by how amazingly effective a handwritten letter is. Keith could have easily typed an email out (yes emails did exist then) one evening and sent it around the creative department, but it would have had a completely different effect. The sentiment and personal nature would have been completely lost on email, it would have been read, saved for a while then binned along with hundreds of other emails.

Keith also obviously knew that creatives are sensitive souls, full of insecurity and self doubt. He must have sensed the creative department was feeling the pressure. What a rally cry for a creative department, what a show of leadership, of passion all so personally written.

"It really is about PASSION. If we can do it others will follow. Let's lead by example. Let's talk more with account handlers and production and media and planning. Don't just wait for bits of paper from the sausage machine of process. Our enthusiasm can be infectious. Pass it on."

Times have changed massively within the advertising industry since 2004.

Agencies have changed beyond recognition. Clients and agencies are under more and more pressure, things are quicker than ever, demands are greater, and if we are not careful there is even more danger of the sausage machine of process taking over. And now agencies are facing new worries, stresses and anxieties brought upon us by the Coronavirus. So this letter resonates even more now. We must remain positive, we need to be passionate about what we do - we need to talk more, we need to be more human, less driven by technology. The passion for creativity and the power of creativity needs to be celebrated and supported more than ever before.

We all need to take time to write our own letters and pass them on. And never forget to inspire others with creativity, or have fun.

How does the idea of working with your partner sound to you? Some will feel quite excited about the idea, others will flinch in terror - and to those Pancho González will gladly say: it is not an endeavour that is bound to fail. Pancho and his...

Resilience, hard work and an endless passion for design. These the ingredients that brought Vocabulary Director of Experience & Product Ana Nicolau to become who she is today - an accomplished leader and established woman in the creative...