The Graffiti Drones that recreate any artwork submitted by app

Drones are a technology that, in my humble opinion, have yet to reach their true potential, at least in terms of application. Initially used as hobbyist flying machines, drones are now being used for everything from home delivery services to high-tech racing contraptions. All very interesting, but not particularly useful, especially when you factor in the potential drawbacks of drone delivery, which are already being explored by Amazon Air (the need for a landing pad in your garden is a particular snafu), but probably won't be ironed out any time soon. On the fringes, however, particularly in the design community, there are exciting and genuinely useful things being done with the technology. Drones were recently deployed to weave a carbon fibre pavilion in Stuttgart, for example, and Land Rover have used unmanned aerial vehicles to scan landscapes after natural disasters.

Also doing bold and benevolent things with the technology is Italian architect Carlo Ratti, whose Paint By Drone system uses remotely controlled flying robots to cover buildings in giant paintings. Designed to turn scaffolding into giant canvases, the system uses a formation of small unmanned aerial vehicles (UAVs) to create artworks on blank surfaces. Each drone carries its own tank of paint, and uses CMYK colours to replicate the traditional printing process. The robots are managed remotely, with their positions individually tracked, and are able to recreate any artwork submitted to a mobile app.

Carlo Ratti said of his artistic drones: “We are keen to explore their artistic use, particularly as a way to engage with the built environment. What we call 'phygital graffiti' is the idea of leveraging drones and, more in general, digital technologies to create participatory works of public art.” He's also incredibly enthusiastic about the potential safety of the system, which could potentially spell the end of artists risking life and limb for their work on larger scale building projects. He adds: “Imagine how this could make the realisation of works of public art both easier and safer, in urban contexts as well as the infrastructure level – for example alongside highways, within railway galleries, on bridges and viaducts.”

The designer's office, Carlo Ratti Associati, has worked on several projects incorporating drones in the past, including using them to act as a personal tour guide for visitors to the Massachusetts Institute of Technology (MIT) campus. In the past, Ratti also suggested that robots could be used to help eliminate disease in cities. Two Paint By Drone pieces are planned for this year in Berlin and Turin, which will see scaffold sheeting in the cities covered in a giant artwork created by the system. Details are yet to be finalised, but the artwork could be created by an artist first and coloured in by drones – controlled by an app, so that people can choose their own piece of the canvas to paint. There's also the potential for passers-by to draw their own designs, which will be recreated by the robots.

The system is still in development, but Ratti hopes to be able to potentially use it on any vertical surface. So if there are any eye-sores in your local town you'd like to see beautified by Carlo's drones, you might be in luck. I for one would love to see them deployed to transform Kidderminster's notorious Crown House building, which has been called Britain's “most hated building.” Then again, maybe a few sticks of dynamite might be the only cure for that particular blot on the landscape. 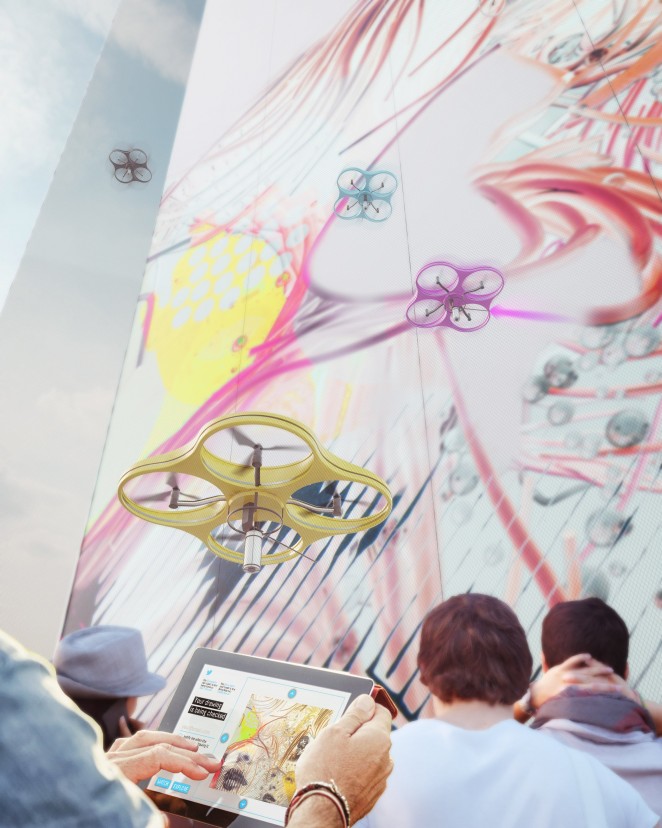